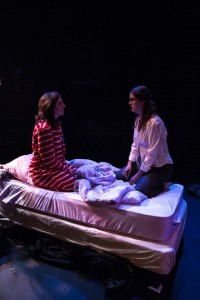 NOT RECOMMENDED: THEATRE IN CHICAGO

The Ruckus’ latest production The Strange could not be better named as it is strange indeed.  Jenny Magnus’ script is a restaging of the 2014 production from the Curious Theatre Branches Magnus in Play Festival, receiving three performances with Julie Cowden reprises her role as the Woman.

I always enter with trepidation when a new script is being presented and my instincts about this play were dead on.  This is a 50 minute play which seems like an exercise for a playwriting class in a university that is presented in a student directed lab theatre.  It is not my nature to be mean-spirited or harsh but it is truly difficult for me to find much about this play or production that is redeeming.

I will begin with what I believe works.  Magnus’ use of textural language is strong and her best feature as a playwright.  I could not help noticing a sophomoric style similar to Edward Albee’s A Delicate Balance and the uninvited guests who bring a plague into the house.  From what I could interpret the theme of this play is about infecting the innocent with a plague of the harshness and victimization of life.

The Woman stumbles into the Girl’s room (played by Ruckus Ensemble Member Stevie Chaddock-Lambert), drunk and pissing in her pants.  Most of her language consists of throwing f-bombs at the Girl and telling her what an ugly person she is and how life has failed her.  The Girl is horrified and permanently scarred by this exchange and we see through 3 scenes her transformation into a version of the Woman.

It is possible that the short length of the play is to its detriment as we never get an idea of who the Girl or the Woman is and what is the nature of their relationship.  It has a Theatre of The Absurd quality but lacks the basics of playwriting such as structure, character development and theme developed in a strong manner.  I did not really care at all about these characters and their whining victimizations about what the world has done to them.  I am also not sure if all of this was a drunken hallucinogenic monologue of the Woman talking to herself as a child.  As an audience member I needed more to grasp onto in order to follow the rambling direction of the story.

The two actresses Julie Cowden as the Woman and Stevie Chaddock-Lambert are, what I believe, good actresses that have not been given much, or the wrong, direction for Artistic Director Allison Shoemaker.  They play the obvious of what is on the page instead of looking for the opposites that would provide dimension and variety to the characters, arousing more curiosity from the spectator.  Cowden needs to be more consistent with the physicality and consistency of how drunk she is as it moves in and out during the scenes (it is not an easy task to achieve even from the best actors).

Regarding the world of the play and setting I never quite figured out what it was supposed to be.  It is the Girl’s bedroom with a 3 dimensional bed, a box in wrapping paper (strange choice) and a row of stuffed animals.  It could be metaphorically about our innocence but I am not sure as it is difficult to play a metaphor.  Also on the back wall were pieces of furniture that were drawn with white chalk which played against the dimensionality of the rest of the set.

The lighting design was effective with the gobo of a window shining on the bed.  There was also a practical floor lamp which, when turned off, made the lights slowly dim instead of shutting off, thus destroying the reality of the lamp as a real light source for the room.

I noticed in the program that this production was underwritten by several large Foundations which made me question if any of the Board Members had ever seen The Strange.   I know Foundations like to support experimental Chicago storefront theatre but there are many other new works that are more deserving than this one with themes, stories and characters for which we care.

The Ruckus, another group of students from a university forming a theatre company, need to raise the bar all around if they wish to draw audience (there were only 6 in the house on a Saturday night) or gain a reputation as a force in the very over-crowded Chicago theatre scene.  I sincerely hope they will succeed.

The Strange plays at the Athenaeum Theatre at 2936 N. Southport Avenue, Chicago, Illinois  60657 Thursdays through Saturdays at 8:00 pm and Sundays at 2:00 pm through June 12th. For calendar information visit TheatreInChicago.com