Steppenwolf’s LookOut Series and Mark Cortale are pleased to present Patti LuPone with Seth Rudetsky as pianist and host. The one-night-only event is Monday, March 5, 2018 with performances at 6:30pm and 9pm in Steppenwolf’s Downstairs Theatre (1650 N Halsted).

Two-time Tony and Grammy award winner Patti LuPone performs at Steppenwolf for one night only alongside Sirius XM Radio host and creator/star of Broadway’s Disaster! Seth Rudetsky as pianist and host. This unscripted evening will be a seamless mix of intimate, behind-the-scenes stories of her career through insightful, funny and revealing questions posed by Rudetsky. 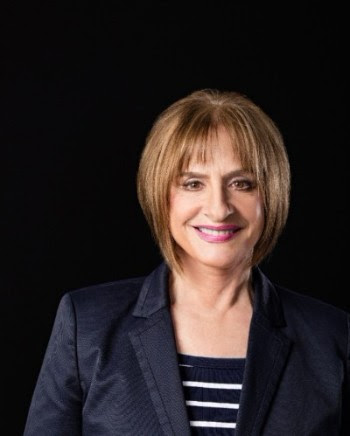 A legendary actress and singer, Ms. LuPone has earned seven Tony nominations over the course of her career. This spontaneous evening of hilarity and show-stopping songs is not to be missed.

Tickets ($79 – $150) to Patti LuPone with Seth Rudetsky go on sale Tuesday, February 6 at 11am through Audience Services (1650 N Halsted), 312-335-1650 and steppenwolf.org. Member Pre-Sale begins Friday, February 2 at 11am. Anytime Black Card members and Holiday Card members can use a credit on a $79 seat in the balcony, but no other member credits can be redeemed. Rush is full priced, and $15 for students.

Seth Rudetsky is the afternoon host on Sirius/XM Satellite Radio’s On Broadway as well as the host of Seth Speaks on Sirius/XM Stars. As an author, he penned My Awesome/Awful Popularity Plan and the sequel The Rise And Fall Of A Theater Geek (Random House) as well as three volumes of Seth’s Broadway Diary featuring inside scoop and hilarious stories from all of the stars he’s worked with. He co-wrote and co-starred in Disaster! (NY TIMES “critics pick”) last season on Broadway. Disaster! also premiered to rave reviews in London’s West End in November. In June 2016, he and his husband, James Wesley, co-produced a recording of What The World Needs Now with stars like Idina Menzel, Lin-Manuel Miranda, Carole King, Audra McDonald which went to number one on iTunes and raised $100,000 for the Orlando shooting victims (and is still raising money. Buy it!). On Inauguration Day 2017, he and James started Concert For America, a monthly series around the country (including S.F.!) helping five non-profits being hurt by the current administration. Stars such as Kelli O’Hara, Barry Manilow, Stephanie Mills, Vanessa Williams, Andy Cohen and more have performed and you can watch the next one streamed live on ConcertsForAmerica.com. For more info, sethrudetsky.com.

LookOut is Steppenwolf’s performance series that presents the work of artists and companies across genre and form, emerging artists and performance legends, quintessential Chicago companies and young aspiring ensembles, familiar Steppenwolf faces and new friends. Tickets to all LookOut programming are available through Audience Services (1650 N Halsted), steppenwolf.org or 312-335-1650. Prices vary for each show. Steppenwolf Red Card and Black Card Members may use credits towards any LookOut programming. The LookOut Series is presented year-round and announced on an ongoing basis. John Zinn, Greta Honold and Patrick Zakem are the producers for LookOut. For more information, visit steppenwolf.org/lookout.

Connected to Steppenwolf’s main lobby is Front Bar: Coffee and Drinks, offering a warm, creative space to grab a drink, have a bite, or meet up with friends and collaborators, day or night. Open Tuesdays – Sundays from 8am to midnight, Front Bar serves artisanal coffee and espresso is provided by La Colombe and food prepared by Goddess and Grocer. The menu focuses on fresh, accessible fare, featuring grab-and-go salads and sandwiches for lunch and adding shareable small plates and desserts for evening and post show service.www.front-bar.com.

Remaining 2017/18 Season
Now playing on the Steppenwolf stage is the Chicago premiere of You Got Older by Clare Barron, directed by Jonathan Berry (January 25 – March 11); followed by Steppenwolf for Young Adults’ production of The Burn by Philip Dawkins, directed by Devon de Mayo (February 17 – March 11). Tickets are available now for the final three shows of the 17/18 season: The Doppelgänger (an international farce) by Matthew-Lee Erlbach, directed by ensemble member Tina Landau and featuring Rainn Wilson (The Office, Juno), from April 5 – May 27, 2018 in the Downstairs Theatre. Next up is Guards at the Taj by Rajiv Joseph, a story about the search for beauty in desperate circumstances (May 31 – June 22, 2018) directed by ensemble member Amy Morton who returns to direct the cast from the acclaimed Off-Broadway production. Concluding the season is The Roommate, by Jen Silverman, directed by Tony Award winner Phylicia Rashad (The Cosby Show, A Raisin In The Sun, Tracy Letts’s August: Osage County). In The Roommate a comically mismatched pair of roommates leads to a surprising and touching friendship (June 21 – August 5, 2018).

Accessibility
Committed to making the Steppenwolf experience accessible to everyone, performances featuring American Sign Language Interpretation, Open Captioning and Audio Description are offered during the run of each play. Assistive listening devices and large-print programs are available for every performance, and the Downstairs and 1700 Theatres are each equipped with an induction hearing loop. All theaters feature wheelchair accessible seating and restrooms, and Front Bar features a push-button entrance, all-gender restrooms and accessible counter and table spaces.

Visitor Information
Steppenwolf is located at 1650 N Halsted St near all forms of public transportation, bike racks and Divvy bike stands. The parking facility ($12 or $14, cash or card) is located just south of our theater at 1624 N Halsted. Valet parking service ($14 cash) is available directly in front of the main entrance at 1650 N Halsted St starting at 5pmon weeknights, 1pm on weekends and at 12 noon before Wednesday matinees. Limited street and lot parking are also available. For last minute questions and concerns, patrons can call the Steppenwolf Parking Hotline at312.335.1774.

Steppenwolf Theatre Company is the nation’s premier ensemble theater. Formed by a collective of actors in 1976, the ensemble of 49 members represent a remarkable cross-section of actors, directors and playwrights. Thrilling and powerful productions from Balm in Gilead to August: Osage County—and accolades that include the National Medal of Arts and 12 Tony Awards—have made the theater legendary. Steppenwolf produces hundreds of performances and events annually in its three spaces: the 515-seat Downstairs Theatre, the 299-seat Upstairs Theatre and the 80-seat 1700 Theatre. Artistic programming includes a seven-play season; a two-play Steppenwolf for Young Adults season; Visiting Company engagements; and LookOut, a multi-genre performances series. Education initiatives include the nationally recognized work of Steppenwolf for Young Adults, which engages 15,000 participants annually from Chicago’s diverse communities; the esteemed School at Steppenwolf; and Professional Leadership Programs for arts administration training. While firmly grounded in the Chicago community, nearly 40 original Steppenwolf productions have enjoyed success both nationally and internationally, including Broadway, Off-Broadway, London, Sydney, Galway and Dublin. Anna D. Shapiro is the Artistic Director and David Schmitz is the Executive Director. Eric Lefkofsky is Chair of Steppenwolf’s Board of Trustees. For additional information, visit steppenwolf.org, facebook.com/steppenwolftheatre, twitter.com/steppenwolfthtr and instagram.com/steppenwolfthtr.