Mae’s life is kinda falling apart. Her boyfriend dumped her, she got fired from her job, and she’s moved back home to take care of her dad. As if that weren’t enough, she has this weird rash and a fantasy cowboy just won’t leave her alone. What happens when your life path leads you right over a cliff? In this bawdy, irreverent and touching new play, up-and-coming playwright Clare Barron masterfully blends reality and fantasy in a dark comedy about falling apart as you’re failing to launch, and what you might find instead. 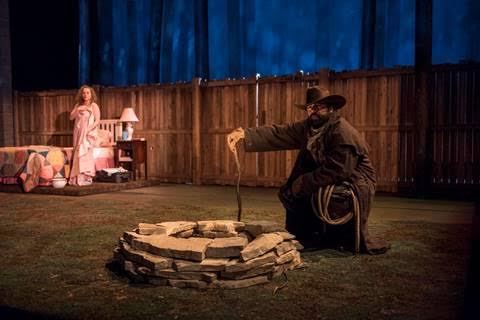 Director Jonathan Berry shares, “Clare Barron’s work manages to be both remarkably intimate in its exploration of relationships, while, at the same time, embracing a vocabulary that is ferociously bold and singularly theatrical. To be able to introduce this exciting new voice to Chicago audiences, collaborating with these remarkable ensemble actors whose work continues to inspire and challenge, feels like incredible good fortune.”

Clare Barron’s plays have been produced by Page 73, Woolly Mammoth Theatre, Clubbed Thumb and The Bushwick Starr, and will be presented by Playwright Horizons in 2018. She is the recipient of an Obie Award, the Paula Vogel Playwriting Award and the Page 73 Playwriting Fellowship. Barron was also the co-winner of the inaugural 2015 Relentless Award established in honor of Philip Seymour Hoffman for her play Dance Nation.

Jonathan Berry joined the Steppenwolf staff as Artistic Producer and Director of The School at Steppenwolf in June 2015. A prolific director, he began his work in Chicago as Steppenwolf’s Artistic Office intern in 1998, and has continued a strong relationship with the company since. His Steppenwolf directing credits include Nick Payne’s Constellations, Melinda Lopez’s Gary for First Look and The Crucible and A Separate Peace for Steppenwolf for Young Adults, as well as assisting on The Weir, The Man Who Came to Dinner, Mother Courage and Her Children and This is Our Youth. Since 2009, Berry has taught Viewpoints for the School at Steppenwolf. A company member of both Steep and Griffin Theatres, Berry has also directed for many Chicago companies, including Goodman Theatre, Steep, Griffin, Remy Bumppo, Redtwist, Lifeline, and The Gift.

Student Discounts: A limited number of $15 student tickets are available online. Limit 2 tickets per student; must present a valid student ID for each ticket; steppenwolf.org/students.

Group Tickets: all groups of 10 or more receive a discounted rate for any performance throughout the season; steppenwolf.org/groups.

Black Card Memberships are for audiences interested in extreme flexibility with six tickets for use any time for any production (with the option to add additional tickets as needed). Perks include easy and free exchanges, access to seats before the general public, savings on single ticket prices and bar and restaurant discounts for pre- and post-show socializing.

Steppenwolf is located at 1650 N Halsted St near all forms of public transportation, bike racks and Divvy bike stands. The parking facility ($12 or $14, cash or card) is located just south of our theater at 1624 N Halsted. Valet parking service ($14 cash) is available directly in front of the main entrance starting at 5pmon weeknights, 1pm on weekends and at 12noon before Wednesday matinees. Limited street and lot parking are also available. For last minute questions and concerns, patrons can call the Steppenwolf Parking Hotline at 312.335.1774.

Remaining 2017/18 Season
Tickets are available now for the final three shows of the 17/18 season: The Doppelgänger (an international farce) by Matthew-Lee Erlbach, directed by ensemble member Tina Landau and featuring Rainn Wilson (The Office, Juno), from April 5 – May 27, 2018 in the Downstairs Theatre. Next up is Guards at the Taj by Rajiv Joseph, a story about the search for beauty in desperate circumstances (May 31 – June 22, 2018) directed by ensemble member Amy Morton who returns to direct the cast from the acclaimed Off-Broadway production. Concluding the season is The Roommate, by Jen Silverman, directed by Tony Award winner Phylicia Rashad (The Cosby Show, A Raisin In The Sun, Tracy Letts’s August: Osage County). In The Roommatea comically mismatched pair of roommates leads to a surprising and touching friendship (June 21 – August 5, 2018).

Connected to the main lobby is Steppenwolf’s own Front Bar: Coffee and Drinks, offering a warm, creative space to grab a drink, have a bite, or meet up with friends and collaborators, day or night. Open Tuesdays – Sundays from 8am to midnight, Front Bar serves artisanal coffee and espresso is provided by La Colombe and food prepared by Goddess and Grocer. The menu focuses on fresh, accessible fare, featuring grab-and-go salads and sandwiches for lunch and adding shareable small plates and desserts for evening and post show service.

Committed to making the Steppenwolf experience accessible to everyone, performances featuring American Sign Language Interpretation, Open Captioning and Audio Description are offered during the run of each play. Assistive listening devices and large-print programs are available for every performance, and the Downstairs and 1700 Theatres are each equipped with an induction hearing loop. All theaters feature wheelchair accessible seating and restrooms, and Front Bar features a push-button entrance, all-gender restrooms and accessible counter and table spaces.

Steppenwolf Theatre Company is the nation’s premier ensemble theater. Formed by a collective of actors in 1976, the ensemble of 49 members represent a remarkable cross-section of actors, directors and playwrights. Thrilling and powerful productions from Balm in Gilead to August: Osage County—and accolades that include the National Medal of Arts and 12 Tony Awards—have made the theater legendary. Steppenwolf produces hundreds of performances and events annually in its three spaces: the 515-seat Downstairs Theatre, the 299-seat Upstairs Theatre and the 80-seat 1700 Theatre. Artistic programing includes a seven-play season; a two-play Steppenwolf for Young Adults season; Visiting Company engagements; and LookOut, a multi-genre performances series. Education initiatives include the nationally recognized work of Steppenwolf for Young Adults, which engages 15,000 participants annually from Chicago’s diverse communities; the esteemed School at Steppenwolf; and Professional Leadership Programs for arts administration training. While firmly grounded in the Chicago community, nearly 40 original Steppenwolf productions have enjoyed success both nationally and internationally, including Broadway, Off-Broadway, London, Sydney, Galway and Dublin. Anna D. Shapiro is the Artistic Director and David Schmitz is the Executive Director. Eric Lefkofsky is Chair of Steppenwolf’s Board of Trustees. For additional information, visit steppenwolf.org, facebook.com/steppenwolftheatre, twitter.com/steppenwolfthtr and instagram.com/steppenwolfthtr.