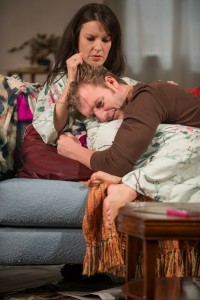 Just how well you really now someone is turned on its ear with the Chicago premiere of Amy Herzog’s disturbing Belleville, which opened this weekend at Steppenwolf.    This four actor psycho-drama gets off to a very “normal” start as we find a young married American couple, Abby and Zack who have been transplanted to Paris.  Zack is a recent medical student graduate who has found a job in a city that his wife has always wanted to live.   But as the quirky and quick dialogue between this very likable twosome ensues , we see soon see that this is a couple who has endured a troubled past.   Enter their landlord, Alouine whose presence adds even more layers to the growing mystery; sprinkle in some wanton drug use along with  a manic depressive who is now off her meds, and Belleville soon has more in common a mental institution then a quaint neighborhood in Paris.

Ms. Herzog’s play, which was first seen at Yale Rep in 2011, has gone through many major rewrites (at least 5 according to the playwright) before it opened at the New York Theatre Workshop this past March to solid reviews.    Director Anne Kauffman has also been with this piece since its inception and has assembled a sensational cast for this difficult work.

Kate Arrington’s performance as the troubled Abby is humorous, captivating and heartbreaking.   Ms. Arrington is instantly likable (which is more than necessary for this play to get its bearings) and as an actress is able to delve into some very dark places which as an audience we are privileged to see.    Cliff Chamberlain’s Zack (a very difficult role to pull off) is also quickly ingratiating but unravels before our eyes into something very Hichcockian and menacing, reminding us that he is one of our finest and most consistent of actors working in Chicago.   The final 10 minutes of this work is an actors tour-de-force with Ms. Arrington  and Mr. Chamberlain giving it everything they have.

Chris Boykin (Alouine) and Alana Arenas (Amina) though not given much to do scripturally  own every scene they are in.    Ms. Arenas performance is especially nuanced as a woman whose betrayal and distrust of this American couple has affected her to the core.

Belleville does suffer from pacing problems.  Whether it was intentional or just a work that needs some more performances under their belts, there were some scenes which seem to linger far longer than they should have.  More to the point, though the play is supposed to clock in at an intermissionless 1:40 minutes, the  opening performance we attended was nearly two hours in length. 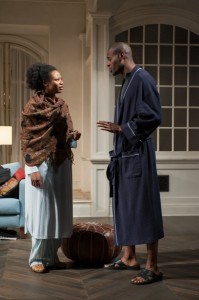 Tickets to Belleville ($20 – $78) are currently on sale through Audience Services (1650 N Halsted St), 312-335-1650 and steppenwolf.org. 20 for $20: twenty $20 tickets are available through Audience Services beginning at 11am on the day of each performance (1pm for Sunday performances). Rush Tickets: half-price rush tickets are available one hour before each show. Student Discounts: a limited number of $15 student tickets are available online using promo code “BELLEVILLE15”. Limit 2 tickets per student; must present a valid student ID for each ticket. For additional student discounts, visit steppenwolf.org/students. Group Tickets: all groups of 10 or more receive a discounted rate for any performance throughout the season. For additional information, visit steppenwolf.org/groups.  For calendar information visit www.TheatreInChicago.com.