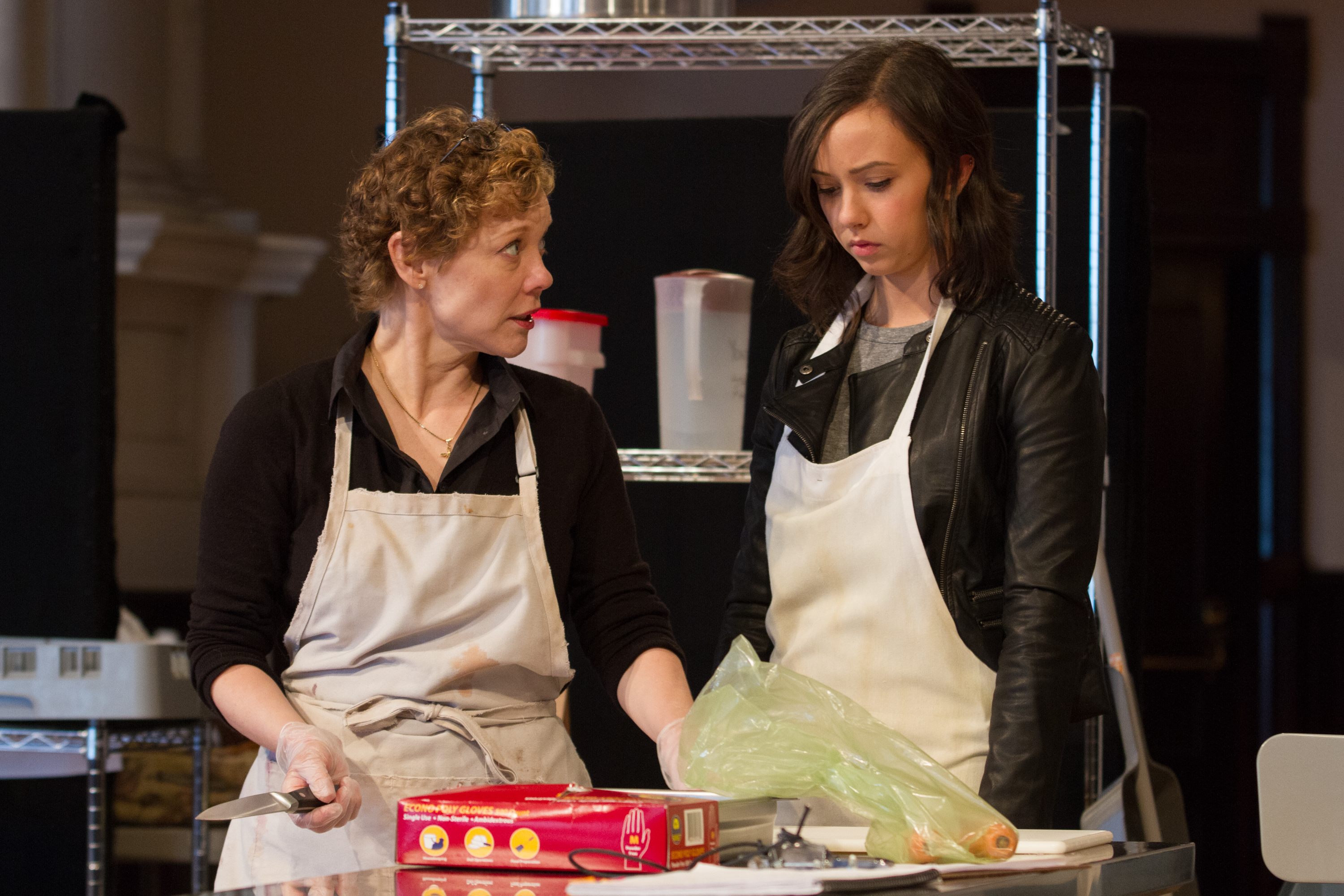 Steppenwolf Theatre Company completes its 2014/15 Subscription Season with the Chicago premiere production of Grand Concourse, a play full of both humor and heart by Heidi Schreck and directed by ensemble member Yasen Peyankov. Grand Concourse begins previews July 2, 2015 (Opening night is July 12, 2015; and runs through August 30, 2015 in Steppenwolf’s Downstairs Theatre (1650 N Halsted St). Tickets ($20-$89) are on sale now through Audience Services (1650 N Halsted), at 312-335-1650 and steppenwolf.org.

Shelley runs a Bronx soup kitchen with unsentimental efficiency, but lately her heart is not quite in her job—or her faith. When Emma—a driven yet erratic college dropout—arrives to volunteer, her volatile mix of generosity and self-involvement brings Shelley’s bubbling midlife crisis to a boil. Warm, funny and compassionate, Grand Concourse introduces you to some fascinating everyday people trying to figure out the enigma of faith, the limits of forgiveness and how to find a little peace.

“The big ideas that grab me in Grand Concourse are our responsibility to others and forgiveness,” shares director and ensemble member Yasen Peyankov. “These ideas are part of the kind of stories that speak directly to our shared humanity. What are the boundaries of forgiveness? How flexible are they? Are there things that we truly cannot forgive?”

The cast features ensemble member Mariann Mayberry as Shelley with ensemble member Tim Hopper as Frog until August 9, at which point he begins rehearsals for Steppenwolf’s 2015/16 season opener, John Steinbeck’s East of Eden. Ensemble member Francis Guinan will take on the role of Frog beginning August 11 through the end of the run. The cast also features Brittany Uomoleale as Emma and Victor Almanzar as Oscar in their Steppenwolf debuts.

Heidi Schreck is a playwright and two-time Obie Award-winning actor. Grand Concourse premiered at New York’s Playwrights Horizons in 2014. Her first play Creature was produced in New York by New Georges and Page 73 in a well-received production directed by Leigh Silverman; her second There Are No More Big Secrets, directed by Kip Fagan, premiered at Rattlestick Playwrights Theatre, and was a New York Magazine and Time Out New York’s Critic’s pick. Most recently, The Long Wharf produced her dark recession-era comedy, The Consultant. Schreck has also performed extensively at theaters such as The Public (Shakespeare in the Park), Manhattan Theatre Club, Two-Headed Calf, The Foundry, Clubbed Thumb, The Women’s Project, The Roundabout, Williamstown, Berkeley Rep and Center Theatre Group. On television, Heidi has appeared on The Good Wife, SVU, and Showtime’s Nurse Jackie, where she has also worked as a writer.

Full performance schedule included at end of the release. Accessible performances include American Sign Language interpretation on Sunday, August 9 at 7:30pm, Open Captioning on Saturday, August 22 at 3pm and an Audio Description and Touch Tour on Sunday, August 23 at 1:30pm (curtain at 3pm). For more information, visit steppenwolf.org/access.

Steppenwolf Theatre Company is America’s longest standing, most distinguished ensemble theater, producing nearly 700 performances and events annually in its three Chicago theater spaces—the 515-seat Downstairs Theatre, the 299-seat Upstairs Theatre and the 80-seat Garage Theatre. Formed in 1976 by a collective of actors, Steppenwolf has grown into an ensemble of 44 actors, writers and directors. Artistic programming at Steppenwolf includes a five-play Subscription Season, a two-play Steppenwolf for Young Adults season, First Look, a new play development series and Visiting Company engagements. While firmly grounded in the Chicago community, nearly 40 original Steppenwolf productions have enjoyed success both nationally and internationally, including Off-Broadway, Broadway, London, Sydney, Galway and Dublin. Steppenwolf has the distinction of being the only theater to receive the National Medal of Arts, in addition to numerous other prestigious honors including an Illinois Arts Legend Award and 12 Tony Awards. Martha Lavey is the Artistic Director and David Schmitz is the Managing Director. Nora Daley is Chair of Steppenwolf’s Board of Trustees. For additional information, visit steppenwolf.org, facebook.com/steppenwolftheatre and twitter.com/steppenwolfthtr.