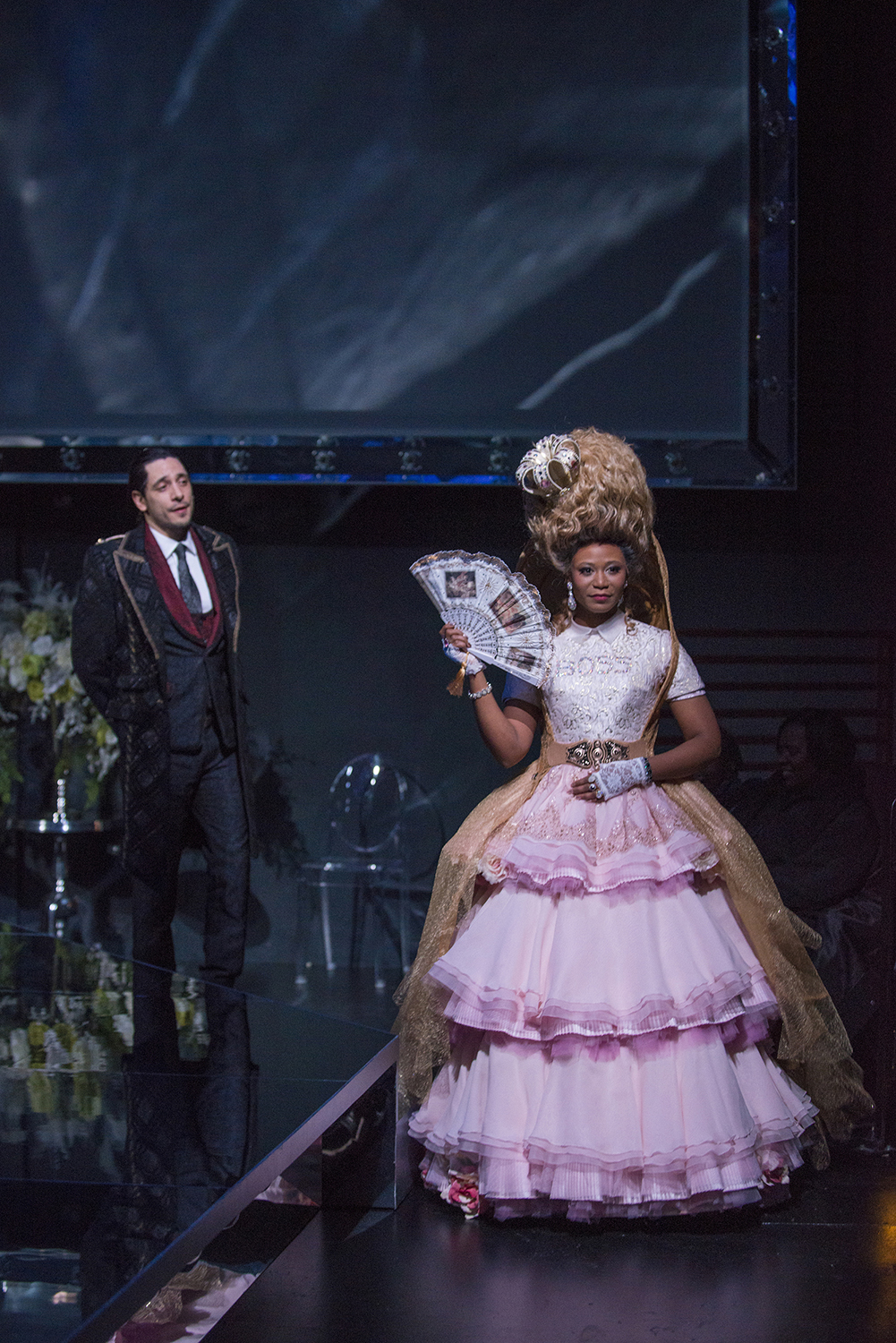 Before Britney Spears and Justin Bieber, there was Marie Antoinette. In David Adjmi’s contemporary take on the young queen of France, Marie is a confection created by a society that values extravagance and artifice. But France’s love affair with the royals sours as revolution brews, and for Marie, the political suddenly becomes very personal. From the light and breezy banter at the palace to the surging chants of “Liberté, Égalité, Fraternité!” in the streets, Marie Antoinette holds a mirror up to our contemporary society that might just be entertaining itself to death.

“David Adjmi gives us a Marie both set in her historical moment with references to the events of her time, but with anachronisms that point to our current cultural moment,” shares Steppenwolf Artistic Director Martha Lavey. “The ‘spoiled rich girl’ of which Marie Antoinette is a prototype lives in the current celebrity pantheon. Why does this image seize the collective imagination? Why is the inevitable that a public figure in this image becomes a figure of scorn”

“I think we’re in love with train wrecks. And Marie was a glorious train wreck,” says Robert O’Hara. “Watching someone who we put up on a pedestal fall down is thrilling. It says something about our own humanity actually. So I want people to walk into this world of royalty and make it a sort of high-end event. It will be beautiful—we’re going to wreck it, but you’re going to enjoy it.”

David Adjmi is an award-winning playwright and recipient of the Guggenheim Fellowship, the Mellon Foundation Playwrights Residency, the Whiting Writers’ Award, the Kesselring Prize for Drama, the Steinberg Playwright Award and the Bush Artists Fellowship, among others. Adjmi’s play 3C received its world premiere at Rattlestick Playwrights Theater in 2012 and was dubbed “the most divisive and controversial play of the season” by the New York Post. 3C was selected as one of the top ten plays of 2012 by the Post, Time Out New York and the Advocate. Elective Affinities, which premiered at the Royal Shakespeare Company, received a U.S. premiere at Soho Rep (“Top 10 of the Year” in Time Out New York and New Yorker.) Other plays include Stunning (LCT3/Lincoln Center Theater, Woolly Mammoth Theatre Company), The Evildoers (Sundance, Yale Repertory Theatre), Caligula (Soho Rep Studio Series) and Strange Attractors (Empty Space). He is a member of New Dramatists, the Dramatists Guild, MCC Theater Playwrights’ Coalition, and Soho Theatre’s “The Hub.”

Director Robert O’Hara received the NAACP Best Director Award for his direction of Eclipsed by Danai Guiria. He received the Helen Hayes Award for Outstanding New Play for Antebellum and an OBIE Award for his direction of the world premiere of the critically acclaimed In the Continuum by Danai Guiria and Nikkole Salter. He wrote and directed the world premieres of Bootycandy and Insurrection: Holding History, the latter of which received the Oppenheimer Award for Best New American Play. He directed the world premieres of Tarell Alvin McCraney’s The Brother/Sister Plays (Part 2), Colman Domingo’s Wild With Happy and Peter Sinn Nachtrieb’sThe Totalitarians. He has worked at various theaters around the country including Playwrights Horizons, Arena, Public Theater, Primary Stages, McCarter, ACT, City Theater, Woolly Mammoth and Goodman. He is currently an adjunct professor at NYU/Tisch School of the Arts and the Mellon Playwright in Residence at Woolly Mammoth Theatre.

Full performance schedule included at end of the release. Accessible performances include an American Sign Language interpretation on Sunday, April 12 at 7:30pm, Open Captioning on Saturday, April 11 at 3pm and an Audio Description and Touch Tour on Sunday, May 3 at 3pm. For more information, visit steppenwolf.org/access.

This project is supported in part by an award from the National Endowment for the Arts. Ameriprise Financial is the Corporate Production Sponsor of Marie Antoinette.

Steppenwolf Theatre Company is America’s longest standing, most distinguished ensemble theater, producing nearly 700 performances and events annually in its three Chicago theater spaces—the 515-seat Downstairs Theatre, the 299-seat Upstairs Theatre and the 80-seat Garage Theatre. Formed in 1976 by a collective of actors, Steppenwolf has grown into an ensemble of 44 actors, writers and directors. Artistic programming at Steppenwolf includes a five-play Subscription Season, a two-play Steppenwolf for Young Adults season and two repertory series: First Look Repertory of New Work, and Garage Rep. While firmly grounded in the Chicago community, nearly 40 original Steppenwolf productions have enjoyed success both nationally and internationally, including Off-Broadway, Broadway, London, Sydney, Galway and Dublin. Steppenwolf has the distinction of being the only theater to receive the National Medal of Arts, in addition to numerous other prestigious honors including an Illinois Arts Legend Award and 12 Tony Awards. Martha Lavey is the Artistic Director and David Schmitz is the Managing Director. Nora Daley is Chair of Steppenwolf’s Board of Trustees. For additional information, visit steppenwolf.org, facebook.com/steppenwolftheatre and twitter.com/steppenwolfthtr.