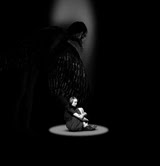 Rehearsals are underway for Steppenwolf for Young Adults’ world-premiere stage adaptation of the bestselling novel, The Book Thief by Markus Zusak, adapted by Heidi Stillman. The Book Thief is staged by Hallie Gordon in partnership with Chicago Public Library’s One Book, One Chicago and the citywide, season-long Now Is The Time initiative with Chicago Public Library, Facing History and Ourselves and other local cultural organizations. The Book Thief runs October 16 – November 9, 2012 in Steppenwolf’s Upstairs Theatre (1650 N Halsted St); Author Markus Zusak will participate in a post-show discussion following the 3pm performance on Sunday, October 21. School performances are sold out, and tickets to public performances are limited.

“In recent years, violence towards youth has become overwhelming,” comments director Hallie Gordon. “As theater artists we work with students scared to play outside, scared to travel to school, scared because they face torment at school from bullying. Therefore, we have engaged with Chicago Public Library, Facing History and Ourselves and other theaters and cultural organizations for Now Is The Time, a season-long partnership inspiring positive change in our great city.”

Now Is The Time is a year-long citywide conversation about how young people can make positive change in their communities and stop the trend of youth violence and intolerance. They are joined by dozens of other organizations and institutions around the city, including a coalition of Chicago’s finest theater companies, for Now is the Time to ACT. Learn more at nowisthetimechicago.org.

Since the fall of 2001, One Book, One Chicago has encouraged Chicagoans of all backgrounds and ages to read the same book at the same time, and come together to discuss a great piece of literature. This marks the third Steppenwolf production of a One Book, One Chicago selection, following The House on Mango Street (2009) and The Crucible (2007).

Along with selecting the young adult productions each season, director Hallie Gordon has created the Young Adult Council, a group of high school students who collectively help to create innovative programming for their peers. As a theater artist, Hallie has directed Eclipsed at Northlight Theatre. For Steppenwolf, Hallie has directed Heart is a Lonely Hunter, To Kill a Mockingbird, the world premiere of a new adaptation by Tanya Saracho of The House on Mango Street and Harriet Jacobs adapted for the stage by Lydia R. Diamond. A new premiere of Toni Morrison’s The Bluest Eye also adapted by Lydia R. Diamond and transferred Off-Broadway to The New Victory Theatre. She has directed staged readings for Goodman Theatre, TimeLine Theatre Company, Chicago Dramatists and Steppenwolf Theatre Company. Hallie is the recipient of The Helen Coburn Meier & Tim Meier Achievement Award.

Author Markus Zusak was born in Sydney, Australia in 1975 and is the author of five books, including the international bestseller, The Book Thief. His work has been translated into more than forty languages, and has earned him both critical and readers’ choice awards across Europe, Asia, North and South America, as well as in his native Australia. His first book, The Underdog, was published in 1999, and was followed by Fighting Ruben Wolfe and When Dogs Cry in 2000 and 2001. All of these books were published internationally, and the latter two received various awards for young adult fiction in Australia. The Messenger won the 2003 Australian Children’s Book Council Book of the Year Award (Older Readers) and the 2003 New South Wales Premier’s Literary Award (Ethel Turner Prize), and received a Printz Honour in the USA. The Book Thief, first published in 2005, has amassed a number of awards, receives critical acclaim and continues to be a readers’ favorite in many countries across the world. It has spent more than six years on The New York Times bestseller list. Currently, The Book Thief is set to be made into a film by Fox 2000 directed by Emmy Award-winner Brian Percival.

Tickets to public performances of The Book Thief ($20) are currently on sale through Audience Services (1650 N Halsted St), 312-335-1650 and steppenwolf.org. Tickets to Sunday performances are 2-for-1. Student Discounts: a limited number of $15 student tickets are available through Audience Services (1650 N Halsted St) or by calling 312-335-1650. Must present a valid student ID for each ticket. School Performances are sold out. For information about future Steppenwolf for Young Adult school performances, contact SYA Education Assistant Lauren Sivak at 312-654-5643. Adult Groups: all groups of 10 or more receive a discounted rate for any performance throughout the season. For additional information, visit steppenwolf.org/groups.

Free post-show discussions are offered after every performance. Steppenwolf is located near all forms of public transportation and is wheelchair accessible. Street and lot parking are available. Performances featuring American Sign Language interpretation, open captioning and audio description are offered during the run of each play. Assistive listening devices and large-print programs are available for every performance.

JPMorgan Chase & Co. is the Corporate Sponsor of Steppenwolf for Young Adults. Target is the sponsor of the Target 2-for-1 matinees.

Steppenwolf for Young Adults’ unique approach combines play production with educational components to enhance arts education for young audiences, as well as their teachers and families. SYA creates two full-scale professional productions each season specifically for teens. Working closely with the Chicago Public and metropolitan area schools and other community partners, SYA annually ensures access to the theater for more than 12,000 participants from Chicago’s diverse communities. The initiative also includes post-show discussions with artists; classroom residencies led by Steppenwolf-trained teaching artists in more than 30 classrooms in 12 public high schools; professional development workshops for educators; and the Young Adult Council, an innovative year-round after school initiative that uniquely engages high school students in all areas of the theater’s operations.