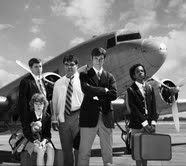 A plane wreck strands a group of English boys on a deserted island during wartime. As they slowly explore their newfound freedom, what starts out as fun and games turns into a vicious battle for power when the boys split into two opposing tribes: one that strives for civility and another that delights in savage violence. The competition escalates into a dangerous, frightening climax, as this thrilling classic looks into the darker parts of human nature where it’s civilization vs. savagery and the mob vs. morality.

“This season we investigate one new and one classic play in which young people navigate tricky moral landscapes in games both virtual and real,” comments Artistic and Educational Director of Steppenwolf for Young Adults Hallie Gordon. “Through Lord of the Flies this fall and Leveling Up in the spring, we examine what it means to grow up and take responsibility for our actions and their sometimes devastating consequences. Building on the themes of last year’s Now Is The Time initiative, aimed at empowering youth to take action against violence and intolerance in their communities, we ask the question: when the game turns deadly, how will you play?”

Student Discounts: a limited number of $15 student tickets are available through Audience Services (1650 N Halsted St) or by calling 312-335-1650. Must present a valid student ID for each ticket. School Performances are currently on sale.Contact SYA Education Assistant Lauren Sivak at 312-654-5643. Adult Groups: all groups of 10 or more receive a discounted rate for any performance throughout the season. For additional information, visit steppenwolf.org/groups.

Target is the sponsor of the Target 2-for-1 Matinees. JPMorgan Chase is the major corporate supporter of Steppenwolf’s career readiness and professional leadership program.

Steppenwolf for Young Adults’ unique approach combines play production with educational components to enhance arts education for young audiences, as well as their teachers and families. SYA creates two full-scale professional productions each season specifically for teens. Working closely with the Chicago Public and metropolitan area schools and other community partners, SYA annually ensures access to the theater for more than 12,000 participants from Chicago’s diverse communities. The initiative also includes post-show discussions with artists; classroom residencies led by Steppenwolf-trained teaching artists in more than 30 classrooms in 12 public high schools; professional development workshops for educators; and the Young Adult Council, an innovative year-round after school initiative that uniquely engages high school students in all areas of the theater’s operations.

Steppenwolf Theatre Company is America’s longest standing, most distinguished ensemble theater, producing nearly 700 performances and events annually in its three Chicago theater spaces—the 515-seat Downstairs Theatre, the 299-seat Upstairs Theatre and the 80-seat Garage Theatre. Formed in 1976 by a collective of actors, Steppenwolf has grown into an ensemble of 43 actors, writers and directors. Artistic programming at Steppenwolf includes a five-play Subscription Season, a two-play Steppenwolf for Young Adults season and three repertory series: First Look Repertory of New Work, Garage Rep and Next Up. While firmly grounded in the Chicago community, nearly 40 original Steppenwolf productions have enjoyed success both nationally and internationally, including Off-Broadway, Broadway, London, Sydney and Dublin. Steppenwolf has the distinction of being the only theater to receive the National Medal of Arts, in addition to numerous other prestigious honors including an Illinois Arts Legend Award and 12 Tony Awards. Martha Lavey is the Artistic Director and David Hawkanson is the Executive Director. Nora Daley is Chair of Steppenwolf’s Board of Trustees. For additional information, visit steppenwolf.org, facebook.com/steppenwolftheatre and twitter.com/steppenwolfthtr.