Starting Your Career as a Theatrical Designer: Insights and Advice from Leading Broadway Designers 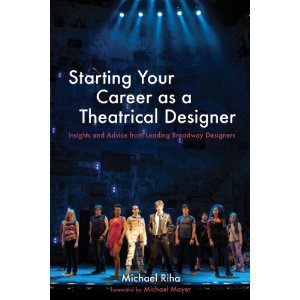 Starting Your Career as a Theatrical Designer: Insights and Advice from Leading Broadway Designers

Wondering How to Break into the Complex World of Theater Design?

Don’t Go At It Alone— Allow Broadway’s Greatest Designers To Take You Behind the Scenes.

If you’ve ever wondered what it really takes to make it in the world of
theater design then Starting Your Career as a Theatrical Designer: Insights
and Advice from Leading Broadway Designers (Allworth Press, August 2012) byMichael J. Riha is just the guide! Ten award-winning and current Broadway
designers—including five set designers, four lighting designers, and one
projection designer—discuss the business aspects of the theater world,
sharing insider information and strategies that will prove invaluable to
aspiring and seasoned theatrical designers alike.

The advice and information offered in these enlightening conversations will
give readers a better understanding of how designing for commercial theater
is different from designing for academic settings or not-for-profit
theaters. Also included are designer sketches, finished drawings, technical
plates of drafting, photos of scale models, storyboards illustrating
multi-scene productions and unique lighting looks, and photos from Broadway
and regional theater productions.

The world of theater design has changed drastically over the past twenty
years. Today, computer-controlled scenic units soar across the stage with
virtual ease. Beautiful backdrops that were once hand painted are being
replaced with digital printouts, projections, and LED screens. The trick to
becoming a successful Broadway designer today is to familiarize yourself
with these new methods, and Starting Your Career as a Theatrical Designer will show you how!
About the Author

Michael J. Riha is the director of design and vice chair of the Department
of Drama at the University of Arkansas. He has designed scenery, lighting,
sound, and costumes for well over one hundred productions. Riha’s current
work is as an assistant designer to Christine Jones on the upcoming
Metropolitan Opera production of Rigoletto. He lives in Fayetteville,
Arkansas.

Allworth Press publishes business and how-to books for artists, graphic designers, photographers, and interior designers, as well as for filmmakers,
performing artists, and authors. In addition, Allworth Press also publishes
legal and personal finance guides for the general public. Books from
Allworth Press are distributed to the book trade by W. W. Norton and can be
found in better bookstores. Titles may also be ordered directly from the
publisher by calling (212) 643-6816 or visiting www.allworth.com.