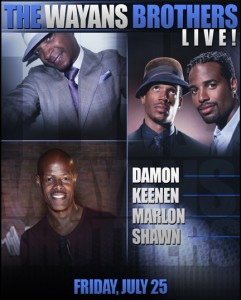 The Wayans brothers have enjoyed success as directors, screenwriters, comedians and actors. Shawn Wayans, 43, and Marlon Wayans, 42, are best known for the sitcom THE WAYANS BROS., which aired from 1995-1999 on the WB, while Keenen Ivory Wayans, 56 – the oldest of 10 siblings – and Damon Wayans, 54, created, wrote and starred in the Fox Network program, IN LIVING COLOR, which ran from 1990 – 1994.  Among recent projects of the talented siblings are: the SCARY MOVIE franchise, WHITE CHICKS and A HAUNTED HOUSE 1 & 2.

At the Star Plaza Box Office, Starplazatheatre.com, Ticketmaster.com or