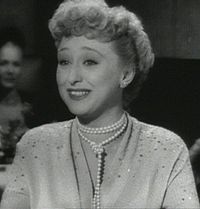 Academy Award-winning actress Celeste Holm has died. A star on both stage and screen, Holm was best known for roles in Gentleman’s Agreement, All About Eve and Oklahoma! She was 95.

Holm died early Sunday morning in her Manhattan apartment with her husband, family and close friends by her side. She had been hospitalized a couple weeks ago following a fire in actor Robert De Niro’s apartment in the same building.

If there was one role that put Holm on the map, it was as the coquettish Ado Annie, in the 1943 hit musical, Oklahoma!

Just shy of her 26th birthday, Holm had only appeared onstage in plays, but was persuaded by a friend to audition for Rodgers and Hammerstein. She sang a classical aria which impressed Richard Rodgers, but he wanted to see if she had the comic instincts to play a simple country girl, Holm told NPR in 1993.

The New York-born, Chicago-raised actress was such a success in Oklahoma! that she was cast as the lead in Harold Arlen and Yip Harburg’s Bloomer Girl the following season.

“She refined the art of skepticism onscreen, but a sort of sensible skepticism, in a movie like A Letter to Three Wives — which I think is her best movie — All About Eve, Gentleman’s Agreement. She was able to be smart and wise, and yet protective and caring at the same time,” Maslon says.

Holm won an Oscar for Gentleman’s Agreement. In the 1947 film, which starred Gregory Peck as a reporter pretending to be Jewish to expose anti-Semitism, Holm played a wise-cracking fashion editor. In the legendary 1950 film, All About Eve, she played opposite Bette Davis.

For the rest of her career, Holm traveled back and forth between Hollywood and New York, doing theater, television and more movies — including High Society, with a score by Cole Porter, in 1955, where she performed a duet with Frank Sinatra.

Holm was a millionaire, but in her final years, a protracted legal battle between her two sons and her fifth husband — a singer less than half her age — stripped away most of her savings. Still, when she was active, Holm adhered to a philosophy of keeping things light.

“You know, we’re the only industry, outside of musicians, whose work is referred to as ‘playing,'” she told NPR. “And it has to be playing. We have to really play together and that’s what the audience responds to. If it’s work … you don’t want to watch!”

Material from The Associated Press was used in this report.