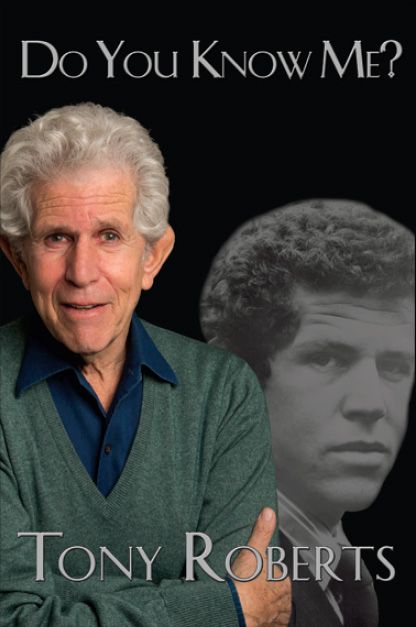 TONY ROBERTS reveals the story of his legendary five-decade career on stage and screen in the new memoir “Do You Know Me?” It will be available as a hardcover book through Amazon.com (available for pre-order here) and an audio book from Audible.com (available for pre-order here), read by the author himself, on October 6. Roberts became a household name through six movies with the iconic Woody Allen and his turn opposite Al Pacino in Sidney Lumet’s film Serpico. His most recent major movie appearance is in The Longest Week with Jason Bateman. In addition, he boasts an accomplished theater career that includes two Tony Award nominations and five Broadway hits for impresario David Merrick. Equally at home in classical theater, he starred in Anton Chekov’s The Seagull on Broadway opposite Ethan Hawke, Laura Linney, Jon Voight and Tyne Daly, as well as the first New York revival of Samuel Beckett’s Endgame at The Irish Repertory Theatre. Roberts’ talents extend to audio books as well, starring as Stone Barrington in over twenty five novels by best-selling author Stuart Woods. Please follow Tony on online at www.Facebook.com/TonyRobertsActor.

In addition to documenting his illustrious career, the book serves as an educational guide to anyone pursuing a career in acting and success in the performing arts. With honesty and humor, he celebrates those who taught him his craft and the business of show business. “Do You Know Me?” also features over 20 photographs from Tony’s personal collection.

A vivid and charming raconteur, Roberts describes his love of acting, the transformative power of theater, and how both were inspired by his ruthlessly innovative teacher Alvina Krause (“The purpose of acting,” she said, “is to illuminate and enlighten. The theater is the last, best chance to save the world.”) He shares stories of his first major role in the soap opera “The Edge of Night” with Larry Hagman and his busy days as an in-demand Hollywood actor (“I crack under leisure,” Roberts once notably quipped). After his big break replacing Robert Redford on Broadway in Barefoot in the Park, Roberts was handpicked by Woody Allen for the writer’s first Broadway ventureDon’t Drink the Water. The two started a multi-decade personal friendship culminating in their work on the Oscar-winning “Best Picture” Annie Hall, in addition to the films Hannah and her Sisters; Radio Days; Play It Again, Sam; Stardust Memories and A Midsummer Night’s Sex Comedy. Their on-screen chemistry was obvious and as Woody’s treasured sidekick, Tony was able to perfect his definitive role as the “tolerant, loyal, understanding, but often frustrated friend of everyone’s favorite eccentric.” He relays tales of pondering life’s big existential questions with Woody over Chinese food, as well as wild telegrams and comical beach vacations.

Also included are fascinating backstage pieces of Broadway lore gleaned directly from the titans of the business, such as Julie Andrews (“There is no more disciplined a professional that I can name, nor a kinder one”); the notorious producer David Merrick (“He brought a sense of power into the room; an unspoken threat that you better not give him any trouble”); Jerome Robbins (“He wanted me to reach beyond my own self-prescribed limitations. He forced me to trust my imagination.”); Neil Simon (“When I write a play, I construct it like a sporting event. The protagonist is like the home team”), and many more.

Since he was performing on Broadway at the time of the 9/11 attacks, he shares behind-the-scenes stories of the resilience and fortitude of the theater community during such a difficult period in the industry.

To encourage developing performers, Roberts offers rare insights into subjects like auditioning (“In a good audition, the actor finds a way to bring a real piece of himself to the proceedings. The lines don’t matter.”), keeping a role fresh in a long-running production (“It takes discipline. It means planning the entire day to be at the peak of one’s creative enthusiasm at curtain time”) and even advice to aspiring audio book readers (“Read five minutes of newsprint every day for two weeks into a tape recorder and listen to it back. You will learn more about how to speak into a microphone than any class could ever teach”).

TONY ROBERTS was recently seen on Broadway in the Manhattan Theatre Club revival of The Royal Family, and in the Tony nominated musical Xanadu. These were preceded by the Broadway productions of The Tale of the Allergist’s Wife; Victor/Victoria; Cabaret; The Sisters Rosenzweig; Doubles; Absurd Person Singular; They’re Playing Our Song; Jerome Robbins’ Broadway; Sugar; How Now, Dow Jones; Promises, Promises; Play It Again, Sam; Don’t Drink The Water; Barefoot In The Park and a dozen others. He has received two Tony Award nominations, and was the winner of the London Critic’s Poll Award for his performance in Promises, Promises. His versatility was on display at Madison Square Garden where he played Scrooge, as well as in the New York City Opera productions of Brigadoon and South Pacific.

His major film credits include the Academy Award-winning Annie Hall, as well as the original The Taking of Pelham One Two Three, the cult classic Amityville 3D, Radio Days, 18 Again! with George Burns; Star Spangled Girl with Sandy Duncan; Switch and Le Sauvage (Lovers Like Us) opposite Yves Montand and Catherine Deneuve. Television highlights include Arthur Miller’s “The American Clock,” Saul Bellow’s “Seize The Day,” and his own series for NBC, “Rosetti & Ryan.” Mr. Roberts has recorded more than 50 audio books, including the popular Stuart Woods detective series featuring Stone Barrington. He recorded the audio versions of classics like The Jungle Book and The Maltese Falcon,and won Audio Book Awards for Bob Woodward’s The Choice and Rudolph Giuliani’s Leadership.

Earlier in 2015 he appeared in the scandalous Brett Gelman TV gala on Cartoon Network’s “Adult Swim,” as well as the highly-acclaimed revival of Carousel at The Lyric Opera in Chicago. A New Yorker by birth, he graduated from The High School of Music & Art, and Northwestern University.