Stage 773 Kicks Off Spring with Newest One Act Festival, “Skin in the Game” 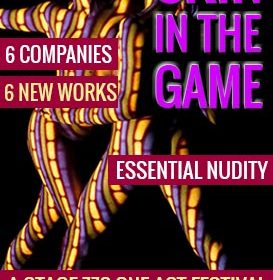 Six bold, unapologetic new plays share the stage in Stage 773’s latest One Act Festival: SKIN IN THE GAME.Opening April 29 and running every Friday night at 10:30 p.m. through May 27, SKIN IN THE GAME spotlights over 40 Chicago artists from six theatre companies who accepted the challenge to create a ten-minute play incorporating an element of nudity essential to the story. This collection of new works uncovers the beauty, vulnerability, and hilarious truths about the human body.

Stage 773’s One Act Festivals are a creative collaboration of otherwise independent theatre companies unified under a new theme at each biannual event. Three One Act Festival veterans, along with three Festival first-timers, take on the challenge of this Spring’s theme and contribute their unique aesthetic for SKIN IN THE GAME.

Kicking off the festival will be Right Brain Project, presenting Maiden, a sex/body-positive short play by local playwright Randall Colburn that explores the difference between expressing love verbally and physically. Organic Theater Company follows with Garbot, a futuristic, yet honest, tale of Artificial Intelligence and what it means to be real. Indie Boots Theatre then offers Happy May in June, an exploration of what happens when a community is forced to evolve in the face of complicated issues such as feminism, sexuality, marriage, religion, nudity, and commodification. Next, The Ruckus presents Way We Kiss, a dramatic study of what the truth really means behind three people’s recount of tragic events from a summer night in rural Mississippi. Hobo Junction Productions brings the ridiculously hilarious adventures of a detective – Top Dick – who uses his secret crime in Butt City in their play, Top Dick, and finally, The Living Canvas presents Cathedrals, a celebration of the human form using light and shadow to prove that our bodies are, in fact, cathedrals.

The nudity in SKIN IN THE GAME can be full or partial, male or female, one instance or many, for either comedic or dramatic effect; however, it must be an essential component of the performance. United under this bold endeavor, Stage 773 is proud to showcase these six daring theatre companies for an exciting night of new theater.

Right Brain Project challenges the contemporary theatre experience by bringing intimate stories to life on the Chicago stage. Formed in 2001, the Right Brain Project actively employs the raw closeness between actor and audience to show relevant issues and ideas that shake, move, uplift, and inspire the crowd.

Organic Theater Company was founded in 1970 and has since established its place as a presenter of classic, contemporary, and adapted works in Chicago’s theater community. With a permanent group of artists, The Organic presents bold, high-quality works by producing shows in rotating repertory.

Indie Boots Theatre creates and celebrates art that features underrepresented perspectives on whose stories are worth telling, what’s funny, and how the world works. The company’s short and full-length plays and musicals promote collaboration while shaping alliances among activists and artists in Chicago since 2012. Indie Boots holds annual festivals, curated programs, and special events to share independent works with the community that inspire discussion and laughter.

The Ruckus was founded in 2006 on the principle that the best art comes from fearless collaborations. With an aim to create a company without borders, these multi-disciplinary artists commit to the growth of their ensemble, works, and collaborations. The Ruckus blends the lines between actor and audience while breaking down the walls of traditional methods to create ruckus from the ground up.

Hobo Junction Productions has been on a mission to develop and produce new, original comedies for Chicago since 2008. Through the company’s commitment to exclusively staging premiere plays and musicals, Hobo Junction shares never-before-heard stories that tackle issues relevant to the community and leave the audience laughing until it hurts.

The Living Canvas has been celebrating the beauty and expressive power of the human form through photography and performance art since 2001. This live spectacle tells a story by applying creative light, sound, and multi-media imagery to the human canvas. The Living Canvas explores controversial matters to break down societal barriers and encourage body acceptance for both audience and performer.

Stage 773 is a vibrant anchor of the Belmont Theatre District and home to Chicago’s finest off-Loop talent. As a performance and tenant venue, our four stages provide entertainment for everyone: comedy, theatre, dance, musicals, and more. We are a not-for-profit, connecting and catalyzing the theater community, while showcasing established artists and incubating up-and-coming talent. Additional information is available online at www.Stage773.com, by phone773.327.5252, and in person at the Stage 773 box office, located at 1225 W. Belmont.