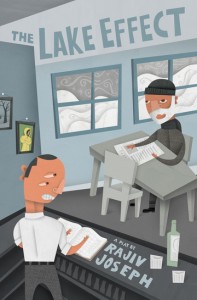 Silk Road Rising co-founders, Artistic Director Jamil Khoury and Executive Director Malik Gillani, launch their company’s 2013 season with the world premiere of Rajiv Joseph’s The Lake Effect. All performances will be presented in the company’s venue in Pierce Hall at The Historic Chicago Temple Building at 77 W. Washington St. in Chicago.

Synopsis: From the playwright of the 2010 Pulitzer Prize finalist Bengal Tiger at the Baghdad Zoo, comes the world premiere of The Lake Effect. In a depressed Cleveland neighborhood amidst a fierce winter storm, an Indian American brother and sister, long estranged, are reunited by the sudden death of their father. Enter their late father’s African American confidante and gambling bookie, and a slew of family secrets get unearthed. The Lake Effect sets in motion a complicated web of relationships and conflicts that challenge our perceptions of race, gender, and success.

For more information about The Lake Effect, visit www.silkroadrising.org

For more information on Silk Road Rising please contact Malik Gillani at (312) 857-1234 ext. 202, or email him at malik@silkroadrising.org