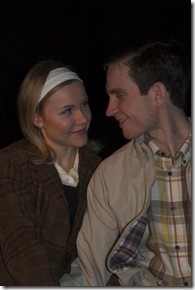 Jeff-Award nominee (2010 Best New Script) Robert Tenges reunites with side project Artistic Director Adam Webster for “Elsewhere,” the third world premiere for the tandem. Set in 1969 with the threat of the Vietnam draft looming, “Elsewhere” explores the journeys of six characters dealing with the loss of relationships and struggling to build new ones in the midst of a frighteningly changing world.

The story is set in Chicago. It is about a widowed mother, Monica who struggles to control her teenage son, Adam. Adam and new girlfriend Dana rebel in subtle and not so subtle ways. Adam is madly in love with what seems to be his first romance, which Dana seems to have more experience.  When Adam’s high school grades are failing and he is also losing interest in his high school activities, this becomes a great concern to his mother and his high school counselor, Jim Guthrie. This concern is all due to his growing relationship with Dana, who has had experiences with dating and sex. Adam, who is infatuated with Dana, has not. Along with fighting virginity, Adam is struggling with his grief for his dead father, growing up, and fighting against the concerns of his mother and his high school counselor.   Adam’s mother, Monica reconnects and rekindles a friendship with her high school classmate, Bonnie. Bonnie has told her friend about her son who enlisted in the Army and is currently fighting in Viet Nam. Bonnie also talks about her alcoholic, abusive husband Ben. As their friendship evolves, Monica learns the reasons that Bonnie is troubled as well. Along with Monica’s concern for her son and her friend, she contemplates a romantic entanglement with her divorced boss, Walter. Walter seems to help Monica focus on her life and she momentarily escapes her worries for her son and her friend. The story takes some twists and turns and the audience later learns revealing information from all of the characters.

“Elsewhere” has the promise of being a good story and a good production.  However, both the story and the acting lack substance and tend to fall flat. The interaction between the characters is awkward and sometimes not believable. Growing up in 1969, and knowing families in similar situations, I doubt that many of these scenarios would happen. They certainly were not openly talked about.  Talking about sex and openly swearing at your parent would not be tolerated and often led to greater problems with young adults in the 1970’s. For example; there is a scene where Monica is telling Bonnie about spying on her son through a window making love to his girlfriend Dana. Monica then relates that she stood and watched them a few moments before going in the house and breaking up their sexual adventure. However, she then reveals to Bonnie that she was touched by her son’s tenderness.  I’m sorry, I really doubt that would happen in the 1969 that I grew up in, nor would anyone’s mother reveal it to her friend or her family for that matter. The parent during that time would more likely burst in the bedroom, embarrassing both teens.  The fact that the mother stood and watched her teen age son having sex is weird and creepy. By the way, Monica is a Catholic. Teenagers having sex would not bring this reaction, and it certainly would not be tolerated in a Catholic home during that time. Additionally, Adam’s high school counselor, Jim Guthrie who was to be a father figure that takes Adam under his

wing, came off as a pedophile. The relationship was not depicted as a father son relationship. The portrayal was very weird and lacked the substance that it needed for Guthrie to be a mentor. The scene in the locker room was somewhat creepy and not necessary.

In my opinion, “Elsewhere” lacked focus and should have more clearly explained Adam’s yearning for growing up finding his independence and sexual identity from his over bearing mother. Additionally, his mother’s character should have focused on her fear of her son facing the draft.  All of this information was on the surface, but never came about during the performance.

The cast includes Shawna Tucker (Monica), Charles Askenaizer (Adam), Amanda Lipinski (Dana), Lucinda Johnston (Bonnie), Don Hall (Walter), and Andy Hager (Guthrie).  The strongest performances were by ensemble members, Lucinda Johnston; who played Bonnie, and Don Hall; who played Monica’s boss Walter. Both supporting parts had more depth and reality than the main characters of Adam and Monica, who just seemed to miss being who they were supposed to portray. The actors may need some additional motivation by their Director, Adam Webster.

The direction was very tight. The scene changes in this small theater were flawless and they moved rapidly.  Unfortunately, the actors’ development to the characters they are portraying needed some work. The acting was not terrible. However, the actors needed to greater grasp the personalities of their characters. At times the performances did not flow. It seemed that the ensemble was trying too hard.  Perhaps with greater direction on the development of their characters, the actors could become the people they are portraying. This additional effort would help to make their performances more believable.

I really don’t believe that this is a bad production. I do believe that both the writing and the direction need some work to make this a captivating, believable theater experience.  I do like the content and the time period of the story. However, it often lacks focus on some of the details and on the development of some of the characters, and the reality of the time period.

The side project is a wonderful production company and they do many great works, bringing many enjoyable showcases to Rogers Park. Being a resident, I am proud to say it is fabulous that the community is growing and is now becoming known for its artistic talent. The intimate theater settings of the Lifeline, No Exit Café, and Side Project theaters are precious and need to be supported and experienced.  Granted, not all of the productions are going to be wonderful all of the time. However, the experience that should not be missed.