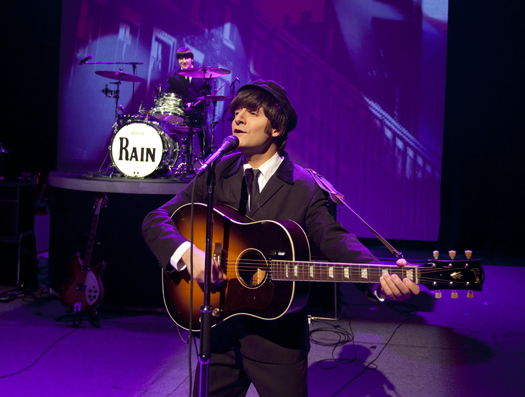 JIM IRIZARRY discusses embodying John Lennon in the hit production RAIN: A TRIBUTE TO THE BEATLES, which returns to Chicago May 20-24 at The Bank of America Theatre. Visit BroadwayinChicago.com for more information.

Mr. Irizarry is from Chicago, IL and began singing and playing the music of his favorite band, The Beatles, at the age of 12. He performed in local Chicago Beatle bands and learned the harmonica to master some of his early Beatle favorites. Years later Jim visited Liverpool for Beatle Week and made several appearances at the Cavern Club. He naturally captures the look and sound of Lennon and transforms himself through all eras of The Beatles as well as recreating John’s famous humor and onstage antics.

RAIN: A TRIBUTE TO THE BEATLES is a live multi-media spectacular that takes you on a musical journey through the life and times of the world’s most celebrated band. Going further than before, this expanded RAIN adds even more hits that you know and love from the vast anthology of Beatles classics such as “I Want To Hold Your Hand,” “Hard Day’s Night,” “Sgt. Pepper’s Lonely Hearts Club Band,” “Let It Be,” “Come Together” and “Hey Jude.”

This stunning concert event takes you back in time with the legendary foursome delivering a note-for-note theatrical event that is the next best thing to the Beatles. Don’t miss the Broadway smash that’s taking the world by storm…RAIN: A TRIBUTE TO THE BEATLES.