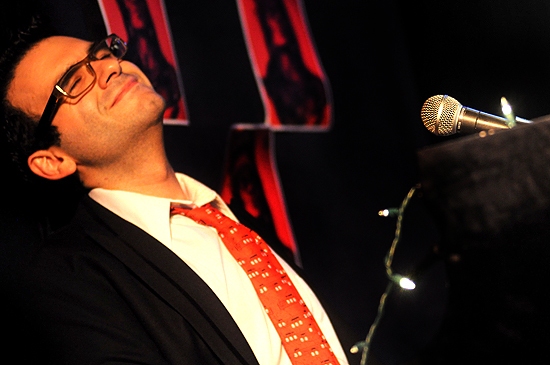 Musical theatre composer JOE ICONIS discusses the cast album release of his off Broadway hit BE MORE CHILL which is now available from Ghostlight Records and Two River Theater as well as his upcoming cabaret concert at 54 Below.

JOE ICONIS has been nominated for two Drama Desk Awards and a Lucille Lortel Award, and is the recipient of the Ed Kleban Award and the Jonathan Larson Award for Musical Theater writing. His songs appeared on season two of NBC’s Smash and he is the author of The Black Suits, the rock-and-roll Spaghetti Western musical Bloodsong of Love, Things To Ruin, The Plant That Ate Dirty Socks and We The People. Upcoming projects include a new musical about Hunter S. Thompson for La Jolla Playhouse and an exploitation action musical called Annie Golden: Bounty Hunter, Yo!. Be More Chill is Joe‘s third album on Ghostlight Records.

Ghostlight Records and Two River Theater announce the release of the Original Cast Recording of the new musical Be More Chill, which recently had its world premiere in an extended run at Two River Theater, Red Bank, NJ – has music and lyrics by Joe Iconis, book by Joe Tracz, and is based on the novel by Ned Vizzini. The show was directed by Stephen Brackett with Chase Brock serving as choreographer. The orchestrator and musical supervisor was Charlie Rosen and the musical director and copyist was Nathan Dame. The Be More Chill cast album was produced by Kurt Deutsch, Joe Iconis and Charlie Rosen.

The song “Halloween” is available as a special “First Listen” free download at bemorechill.viinyl.com.

To help celebrate the album, Joe Iconis’s Rock and Roll Haunted Halloween Special 6 will be performed at the Laurie Beechman Theater at 407 West 42nd Street on October 31st at 7:30 PM. The event will star members of the original cast of Be More Chill including Gerard Canonico, Will Connolly,Katie Carlson Farrell, Katie Ladner, Lauren Marcus, and George Salazar. Jeremy Morse(Waitress), Will Roland (Dear Evan Hansen), and Jason “SweetTooth” Williams (Transport Group’sOnce Upon a Mattress) will also perform. There is a $15 cover and a $20 food/drink minimum. Get tickets at www.westbankcafe.com/theater

Also available on Ghostlight is the cast recording of Things To Ruin – The Songs of Joe Iconis and The Joe Iconis Rock and Roll Jamboree. To pre-order Be More Chill, please visit www.sh-k-boom.com/be-more-chill.

Praised as “a high-energy, imaginative, well-crafted world premiere musical” in The Star-Ledger, Be More Chillwas lauded as “a vibrant, inventive musical that makes the most of every moment and features an abundantly talented cast” by BroadwayWorld.

Jeremy Heere (played by Will Connolly) is just an average teenager. That is, until he finds out about “The Squip” (Eric William Morris) – a tiny supercomputer that promises to bring him everything he desires most: a date with Christine (Stephanie Hsu), an invite to the raddest party of the year and a chance to survive life in his suburban New Jersey high school. But is being the most popular guy in school worth the risk?

JOE ICONIS has been nominated for two Drama Desk Awards and a Lucille Lortel Award, and is the recipient of the Ed Kleban Award and the Jonathan Larson Award for Musical Theater writing. His songs appeared on season two of NBC’s Smash and he is the author of The Black Suits, the rock-and-roll Spaghetti Western musicalBloodsong of Love, Things To Ruin, The Plant That Ate Dirty Socks and We The People. Upcoming projects include a new musical about Hunter S. Thompson for La Jolla Playhouse and an exploitation action musical calledAnnie Golden: Bounty Hunter, Yo!. Be More Chill is Joe’s third album on Ghostlight Records.

JOE TRACZ’s adaptation of The Lightning Thief (with composer Rob Rokicki) received a Lortel nomination for Outstanding Musical. His work has been developed with the Manhattan Theatre Club, Second Stage, Roundabout, Ars Nova and the Williamstown Theatre Festival.  He is currently writing for Netflix’s A Series of Unfortunate Events.

NED VIZZINI (1981-2013) was the bestselling author of acclaimed young-adult books including It’s Kind of a Funny Story (also a major motion picture), Teen Angst? Naaah… and Be More Chill.

CHASE BROCK recently choreographed Sara Bareilles’ Waitress at American Repertory Theater and Michael John LaChiusa’s First Lady Suite at The Public Theater. He is the Artistic Director of The Chase Brock Experience and the subject of the documentary film Chasing Dance.

The creative team for Be More Chill included scenic designer Dane Laffrey, costume designer Bobby Frederick Tilley, and lighting designer Tyler Micoleau. The sound design was by Zachary Williamson, the fight direction was by UnkleDave’s Fight-House, the casting was by Adam Caldwell, and the production stage manager was Amanda Michaels and Carmelita Becnel during the extension run.

Two River Theater, under the leadership of Artistic Director John Dias and Managing Director Michael Hurst, creates great American theater performed by award-winning artists. They produce American and world masterpieces, and new plays and musicals. Two River Theater offers new-play commissions and artistic development activities that support the most adventurous artists in the American theater; invites its audience to be part of the creative process through readings and open rehearsals; and cultivates students and young people to participate in innovative arts-education programs and become a new generation of theatergoers. Founded in 1994 by Joan and Dr. Robert M. Rechnitz, Two River Theater is easily accessible by car, train, or bus, with great restaurants and shopping within walking distance of the theater. For more information, visit tworivertheater.org or call (732) 345-1400.