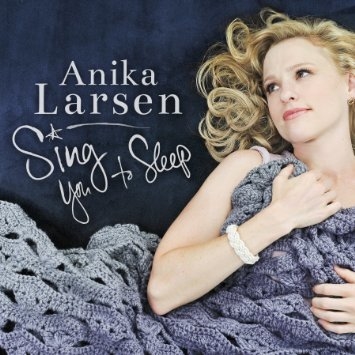 YELLOW SOUND LABEL  releases Sing you to Sleep, the debut solo CD of dreamy ballads and standards from ANIKALARSEN, currently starring on Broadway in Beautiful – The Carole King Musical. For her role as legendary songwriter Cynthia Weil, Anika was nominated for a 2014 Tony Award and won the Drama Desk Award. She has also appeared in Rent, All Shook Up, Xanadu and Avenue Q. Sing you to Sleep – produced by Emmy Award-winner and Grammy Award-nominee Michael Croiter (Matilda, Big Fish, Heathers), with Dan Watt serving as executive producer – will be available online and in stores December 9. Pre-order the album at Amazon.com or www.yellowsoundlabel.com.

Sing you to Sleep is a tuneful and personal album for adults and children alike, which Larsen recorded with her nine siblings and fourteen nieces and nephews in mind. The twelve soulful songs are drawn from contemporary pop (“Count on Me” by Bruno Mars, “Fields of Gold” by Sting), legendary singer/songwriters (“Annie’s Song” by John Denver, “Make You Feel My Love” from Bob Dylan), musical theater (“Summertime” from Porgy & Bess, “Sleepy Man” from The Robber Bridegroom) and animated classics (the poignant “Baby Mine” from Dumbo) and An American Tail (a gently swinging version of “Somewhere Out There,” with lyrics by herBeautiful character Cynthia Weil). Jessie Mueller, who won the 2014 Tony Award winner for playing Carole King in Beautiful, is featured on the album in a duet with her co-star for James Taylor’s “You Can Close Your Eyes.”

“I’ve cared for a lot of little ones in my time, and I have sung all of them to sleep with some of my all-time favorite songs,” says Anika. “I am so thrilled to share this collection with you. Every song has a particular history with me, or is just so pretty that I haven’t been able to stop singing it over the years. I hope you and yours enjoy them as much as I have—so much so that they put you to sleep.”

“When I first heard Anika sing, I was captivated and needed to hear more,” says executive producer Dan Watt. “Besides her ability to belt out a song, I heard an amazing quality in her voice, and I wanted others to hear it too.  Working with Anika has been an absolute dream and theses songs are pure perfection.”

When Anika opened on Broadway in Beautiful earlier this year, she was praised for her “megawatt scene-stealing abandon” (Entertainment Weekly), “enormous warmth” (The Hollywood Reporter) and “breezy elegance” (New York Daily News). She was hailed as “sharp and spunky” (New York Observer), “bubbly and brainy” (NBC New York) and “vibrant, quick-witted and firmly independent” (San Francisco Chronicle). Beautiful is currently playing at the Stephen Sondheim Theatre. The Beautiful original Broadway cast recording, which features Larsen, was released in April.

ANIKA LARSEN grew up in Cambridge, Massachusetts with nine brothers and sisters from different races and countries. She made her performance debut singing with her siblings at her parents’ annual Christmas parties.  Her mother thought they were the multi-cultural Von Trapps.

After majoring in theater at Yale, Anika moved to New York City where her first professional job was Rent, during which she was given the nickname Shafrika. In addition to her Broadway credits, she also appeared in Disaster!; Unbroken Circle; Closer Than Ever; Miracle Brothers; Zanna, Don’t!, and more. Anika is the only person on the planet who can say she was in the original casts of both Xanadu and Zanna, Don’t!

Anika co-founded Jaradoa Theater with director April Nickell in 2007. Their mission was to promote mercy, beauty and truth through performance and service. For four years they produced theater that strove to resonate, inspire and reach audiences that didn’t usually have access to theater. The company presented shows in public middle schools, at-risk youth centers, teen alternative-to-incarceration programs, nursing homes, and homeless senior centers.

In 2009, Jaradoa Theater produced Shafrika, The White Girl, a musical Anika wrote about her childhood. She and Orlando Bishop co-wrote “The Joneses,” one-hour dramedy TV pilot loosely based on her personal story. Anika is currently writing a new play with her longtime writing partner April Nickell.