Christopher M. Howard (Dance Captain) discusses his work in the National Tour of “AN AMERICAN IN PARIS”, winner of four 2015 Tony Awards®, which will play Broadway In Chicago’s Oriental Theatre (24 W. Randolph) for a three-week engagement July 25 through August 13, 2017.

Inspired by the Academy-Award winning film, AN AMERICAN IN PARIS is the romantic story about an American soldier, a mysterious French girl and an indomitable European city, each yearning for a new beginning in the aftermath of war. Directed and choreographed by 2015 Tony Award-winner Christopher Wheeldon, the show features the music and lyrics of George Gershwin and Ira Gershwin, and a book by Craig Lucas. 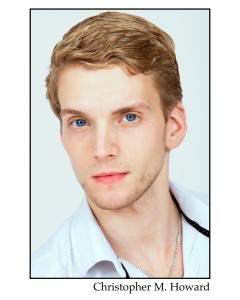 The score of AN AMERICAN IN PARIS includes the songs “I Got Rhythm,” “Liza,” “‘’S Wonderful,” “But Not For Me,” “I’ll Build a Stairway to Paradise,” and orchestral music including “Concerto in F,” “Second Prelude,” “Second Rhapsody/Cuban Overture” and “An American In Paris.”

The production opened to widespread critical acclaim at the Palace Theatre on Broadway in April 2015 after its world premiere at the Théâtre du Châtelet in Paris. The New York production closed in October, 2016 after playing more than 600 performances.  A West End production of AN AMERICAN IN PARIS opens in March 2017 at the Dominion Theatre.

Broadway In Chicago was created in July 2000 and over the past 17 years has grown to be one of the largest commercial touring homes in the country.  A Nederlander Presentation, Broadway In Chicago lights up the Chicago Theater District entertaining well up to 1.7 million people annually in five theatres.  Broadway In Chicago presents a full range of entertainment, including musicals and plays, on the stages of five of the finest theatres in Chicago’s Loop including The PrivateBank Theatre, the Oriental Theatre, Cadillac Palace Theatre, the Auditorium Theatre of Roosevelt University and just off the Magnificent Mile, the Broadway Playhouse at Water Tower Place.  For more information, visit www.BroadwayInChicago.com.