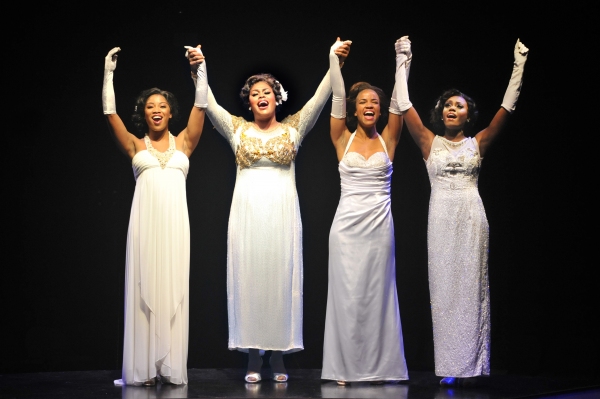 DREAMGIRLS, the smash Broadway musical turned hit movie, currently in previews at The Marriott Theatre (10 Marriott Drive, Lincolnshire, Ill.), opens August 29 and runs through October 28, 2012.  All photos are courtesy of Peter Coombs and The Marriott Theatre.

With music by Academy Award nominee Henry Krieger and lyrics and book by Tony and Grammy-winning Tom Eyen, DREAMGIRLS features the unforgettable hits “(And I Am Telling You) I’m Not Going”, “One Night Only” and “I Am Changing”. The musical opened on Broadway in 1981, running for 1,521 performances, and was nominated for thirteen Tony Awards, winning six. At the helm of the Marriott Theatre production is multiple Jeff Award-winning director and choreographer Marc Robin.

Full of onstage joy and backstage drama, DREAMGIRLS follows the rags to riches story of a young female 1960s Motown group from Chicago. Hopeful talents Deena Jones, Lorrell Robinson and Effie White are performing as The Dreamettes when ambitious agent Curtis Taylor, Jr. discovers them. He lands them a job as backup singers for the soul and rock ‘n’ roll sensation James “Thunder” Early and begins to guide their quickly rising career. However, when the beautiful Deena emerges as the star of the group rather than the full-voiced Effie, the girls are brought to a personal and professional crossroads. Effie must then find the strength within to rise again, just as Deena will later need to master all her fortitude to leave the controlling Curtis and pursue her dreams of acting. The heartbreaks of showbiz, love, and music all collide in this acclaimed musical that will sing and dance its way into your heart.