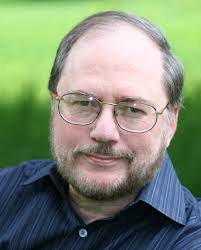 Rupert Holmes is one of theatre’s most prolific playwrights and composers. From The Mystery of Edwin Drood to Curtains, Mr. Holmes has the uncanny ability to create a theatrical experience that stays in your collective memory for a lifetime.  With his 1992 play Solitary Confinement being remounted at the Jedlicka Performing Arts Center through November 15th, Mr. Holmes reflects on his amazing career.

Showbiz Chicago: Thank you for this opportunity as I am one of your biggest fans and have been ever since I saw the amazing Betty Buckley in The Mystery Of Edwin Drood, which is still one the greatest theatrical experiences I have ever had, with Perfect Strangers as one of the best songs ever written for the stage.

Rupert Holmes (RH): Thank you for such gracious and generous sentiments, Michael. They mean a great deal to me. And if your young encounter with Edwin Drood, the transcendent talents of Ms. Betty B., and the love duet I wrote for two sopranos spurred onward your own admirable career, then I am even further delighted.

[PERSONAL ASIDE (off the record): Just the other day, some BroadwayWorld.com critic reviewed an L.A. production of TMOED and said that the only good song in it was “Don’t Quit While You’re Ahead.” And I thought, ‘Not “Perfect Strangers”… “Moonfall” … “There You Are”…?’ It quite stunned me. You have just made me feel much better. I wonder if you ever saw Betty’s guest appearance on the Xmas episode of my TV series “Remember WENN”…? I wrote two songs just for her in that episode. I believe there’s a rather grainy YouTube video of the hour show. You might enjoy it.] 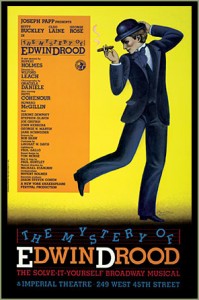 Taking your incredible career as a whole, what do you think is the key to staying relevant as a playwright in this age of instant gratification and social media?

(RH):I feel there’s a healthy balance in human nature that usually kicks in, given time. Feed us nothing but candy and we’ll begin to dream of carrots and celery. Play us only rap music and we start to yearn for a lilting ballad. Instant gratification has the same shelf life as raw clams, and can be as intriguing but as empty as a month of one night stands. I think the best way for a playwright to stay meaningful in our glib era is to go against the grain and resolutely tell your story the way stories have been told on stages for centuries. Give your characters the time they need to discover and reveal their thoughts and yearnings. There are no special effects or computer generated images as powerful as the deepest human emotions.

Embrace analog. Digital is so dated. And by the way, if you set your story in another time or place, you may find your characters stay relevant far longer. A period setting never grows old.

What was your inspiration for writing Solitary Confinement

(RH): My first comedy-thriller Accomplice not only pulled rabbits from every hat on the stage but even pulled some hats from rabbits. After it won the “Edgar” Award from The Mystery Writers of America, I wondered if there was anything else that, to my knowledge, had never been tried before in a theatrical mystery. Something extremely unusual (but complex to create) sprang to mind, and that quickly became Solitary Confinement. What that was and is, I can’t reveal here, I’m afraid.

As it was first conceived for actor Stacy Keach, are there any lines or scenes that have been rewritten or re-conceptualized as the play has been tackled by other actors in that role?

(RH): Other than a few topical references, no, the play has remained surprisingly intact. However, what actors bring anew to their roles always catches me completely by surprise.

How does your writing style or approach to the material differ when you are writing a play as opposed to a musical such as Drood, Curtains or The First Wife’s Club (which I just saw in London).

(RH): All well-crafted plays as well as musicals have their soaring moments, amusing set pieces, flashing exchanges and intimate soliloquies. They are a little easier to achieve in a musical, where the dialogue is often ramping its way up to a rousing chorus, a ballad, a patter song or a dance number. In a straight play, of course, you have to achieve the same elation, revelation or heartbreak minus the considerable assistance of music. For me, that doesn’t change the need to give the actors moments where they can lift off or privately bare their souls…we just don’t have an orchestra start playing underneath them. So for me the dynamics of writing the words for a play or a musical are not that different—although the “shopping list” of at least one song per scene is always in the back of my mind.

Someone once asked me if I thought David Mamet’s masterful play Glengarry Glen Ross could be made into a musical. “It already is a musical,” was my answer. As is Noises Off , The Homecoming, Sleuth, Uncle Vanya and everything that Shakespeare fellow penned.

What has been the most difficult show for you to get from conception to production and why?

(RH): My own musical adaptation of The Picture of Dorian Gray, the first musical where I am the sole book writer-lyricist-composer since The Mystery of Edwin Drood. The people who commissioned it suddenly lost the wherewithal to produce it, but they refuse to relinquish the piece and let other producers take the lead. Because I have sentimental attachments to those initial producers, it is hard for me to turn my back on them, and they are understandably reluctant to give up the dream of bringing it to the stage. I’ve performed just the first act in a reading at The British Museum, where its warm reception, especially from the grandchildren of Oscar Wilde, affirmed my belief in its worth. Someday, I hope…

Much of your early success came from the music/recording industry, which is now much more corporate then it was back in the 70’s and 80’s. Why do you think songs from musicals haven’t been on the charts in almost 20 years and what, in your opinion, can be done to reverse that trend? 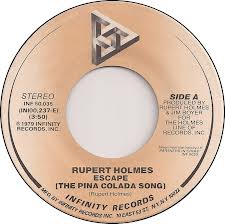 (RH): My theory is that in the seventies, the majority of pop songwriters became troubadours, coming more out of a folk or folk-rock tradition than from pop. Their songs were represented as being absolute and highly personal extensions of themselves…autobiographical, often confessional, self-critical, or self-assured. The illusion was that the song, the singer, their life and their unique “voice” were all one and the same thing.

While that can be very appealing and feel very intimate, creating a one-on-one relationship with the listener…well, it’s really the antithesis of writing songs for most musicals, where five or ten distinctly different personalities may be speaking in the course of one story. Imagine everyone in a group therapy session all talking like Bob Dylan. Or everyone at an advertising agency speaking like James Brown. And while following the love life of Taylor Swift through the diary of her songs can be very enjoyable to many, imagine an Army platoon in World War Two all speaking like Taylor Swift. Simply put, writing songs for theater requires the capability and willingness to speak as people who aren’t you.

I was fortunate that, even in the seventies, I was writing narrative story songs, told in the first person, even though I was clearly not a 1940’s big band saxophonist, an accountant-commuter at a large Wall Street firm, or a cop in Los Angeles avenging the death of my partner. It always surprises me that there are people who think that I, Rupert Holmes, am the narrator of “Escape (the Pina Colada song)” and that the fellow who is “tired of his lady” is me. I doubt I’d be so dense as to not sense that my wife was restless with me as well.

But until songwriters can give up writing about themselves, and learn to create and inhabit people from very different walks of life, voicing sentiments that are not necessarily their own, I think there will continue to be a needless gulf between pop songwriters and theater songwriters.

Both your mother and father brought different styles of music into your home when you were growing up. What are some of your earliest memories of being interested and influenced by a particular style of music?

(RH):My father was a classical conductor and a jazz musician. My mother was wonderfully literate and loved all the pop crooners of the forties. So I grew up in the fifties and sixties in this amazing household where, by age five, I was on a first-name basis with Wolfgang Mozart, Duke Ellington, Mel Torme, Maurice Ravel, Jimmie Lunceford, Leroy Anderson, Nat King Cole,

The HiLos, Dvorak, Ella Fitzgerald, Sauter-Finegan, the Everly Brothers, Brahms, Noel Coward, trombonist J.J.Johnson, Robert Farnon, Debussy, Art Tatum and all things Sinatra. My mother alerted me to Rodgers and Hart and the amazing tunes in the Episcopalian hymnal. My brother was playing Gilbert and Sullivan and Puccini all day. The radio informed me about everything else. The first live performance I attended was at age three, in England, where I was born. I have memories of it, a British Christmas “panto” (a kind of pop-oriented “fairy tale adventure” musical) and I’m sure it inspired my musical of Edwin Drood. The first musical I saw in the States was My Fair Lady and I already knew the entire score by heart. Not a bad start. At six, wrote my first song, a kind of swingin’ lounge tune called “Nobody Loves Me.” Age sixteen, I was visiting my family in London and heard a group called the Beatles sing “She Loves You.” That changed everything. Taught myself piano and guitar, formed a rock band called “The Nomads” and started writing songs for us to sing. I noticed that the music in Hitchcock and James Bond films was as good as the movie itself…maybe even was the movie. I studied music theory by day at Manhattan School of Music and arranged sessions for The Drifters and The Platters at night. I was nineteen. How blessed an upbringing did I get, huh? I thank my good fortune, my parents and my brother each day.

What inspires you to create?

(RH): All I need is the opportunity. The inspiration is around me every waking moment, in restaurants, airplane terminals, offices, elevators, college campuses…human beings are simply amazing, hilarious and utterly heartbreaking. And most of my work is driven by the desire to make people laugh—though I’m afraid the thoughtful nature of your questions has caused me to jest far too little in my answers here—or to remind my listener, reader or audience that most other people are filled with the same yearnings, shyness, dashed hopes and deferred dreams that we sometimes think of as our own exclusive property…and that we’re all in this mess alone together.

Jedlicka Performing Arts Center (JPAC) in Cicero presents Solitary Confinement by special arrangement with Tony Award-winning playwright, Rupert Holmes.  JPAC had a smash hit last year with another thriller by Rupert Holmes, “Accomplice,” and now the theatre company is delighted to present this rarely produced masterpiece.  The plot revolves around an eccentric and reclusive multi-millionaire who becomes the intended murder victim of a crazed psychopath. Contacted and taunted by the murderer, his isolation has made it nearly impossible to summon help as he awaits the inevitable.  The lead role was conceived as a star-vehicle for veteran actor, Stacy Keach.  Holmes has been a success in everything from songwriting to novels and more, but he’s probably best known for his 1985 Tony Award-winning musical “Drood” and his 2007 Drama Desk Award-winning book for the Broadway musical “Curtains”.

Solitary Confinement October 31 – November 15 Fridays and Saturdays at 7:30pm and Sundays at 3:00pm