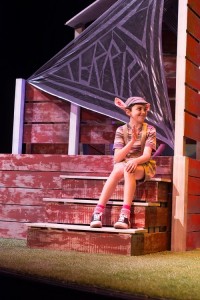 The classic novel Charlotte’s Web is being staged to rave reviews as a co-production between Emerald City Theatre and Broadway In Chicago.  Actor Liam Dahlborn discusses his iconic role of Wilbur The Pig and the challenges and fun that go along with it.

Liam will be a 7th grader at St. Clement School in the fall. He has previously appeared at Emerald City as Hermey the Elf in Rudolph and as Thing 1/Thing 2 in The Cat in the Hat at the Apollo Theater and the Broadway Playhouse. At Emerald City Theatre School, he has appeared in The Complete Works of Shakespeare – Abridged,Newsies, Guys and Dolls, Cats, and Wicked. Liam was also the understudy for the newsboys in Gypsy at Chicago Shakespeare Theatre. At the state fair, the spider web above Liam would say “LUCKY” because he is lucky to be able to tell this special story.

Showbiz Chicago:  In Charlotte’s Web you play Wilbur the Pig.  As an actor is it harder to play a human or an animal?

Liam Dahlborn:  I think it is harder to play an animal because you need to make the audience believe it.  When I am Wilbur, I have to think about what is important to a pig.  Food and sleep are always on the mind of a pig!

Showbiz Chicago: Did you ever read or see any film versions of Charlotte’s Web before you got the part?  Did they affect how you play Wilbur?

Liam Dahlborn:  Yes, I read the book, “Charlotte’s Web,” in third grade.  Later, I saw the movies.  Wilbur was my favorite character because I thought he had such a good heart.  When I play Wilbur, I want the audience to remember his kindness and his love of friendship – just like I recalled him when I first read this special story.

Showbiz Chicago: What do Liam and Wilbur have in common?

Liam Dahlborn:  Both of us are small.  Wilbur is the runt of the litter and I am the smallest boy in my grade.  I don’t mind being small and I think Wilbur doesn’t mind it either.

Showbiz Chicago: What has being in the show taught you? 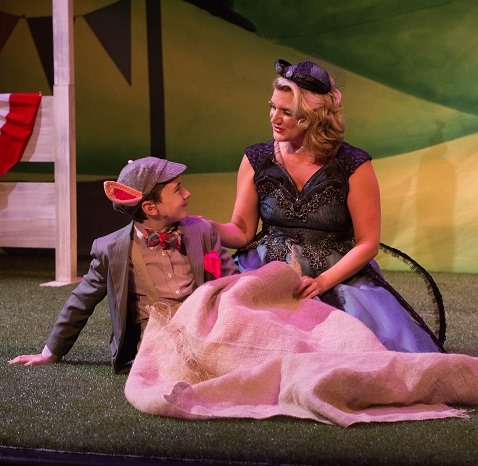 Liam Dahlborn:  Being in the show has taught me about the value of working with a great ensemble of actors.  I am lucky because I have a scene with almost everyone.  Ernie Nolan, our director, showed me how to react to each situation and character.  It has been so much fun.

Showbiz Chicago: What production did you first see that made you want to pursue acting?

Liam Dahlborn:  I saw my first play when I was three years old at Emerald City Theatre.  I loved sitting in the audience and watching all of the actors come and go.  But, the show that really made me want to pursue acting was “High School Musical.”  My sister, Lily, and I would watch it over and over again with the dream of performing on stage.  Now, the two of us are doing “Charlotte’s Web” together!  Lily is Charlotte’s Daughter in the show.

Showbiz Chicago: What is your favorite theater show and why?

Liam Dahlborn:  My favorite theater show is “Newsies.”  My family and I saw the show in New York City last year.  I loved all of the amazing dancing and singing.  We can’t wait to see it again when it comes to Chicago.

The favorite on every child’s bookshelf, CHARLOTTE’S WEB, comes to the stage! When Wilbur is saved and sent to liveon a farm, he finds a new unexpected family. Follow our piggy hero as he grows from being the runt of the litter to“Some Pig” with the help of a remarkable spider, Charlotte. Join Wilbur, Charlotte, Templeton the Rat, and all the farmyard friends at the State Fair this summer!

CHARLOTTE’S WEB stars Tosha Fowler as Charlotte and Liam Dahlborn as Wilbur. Avery Moss plays Fern and Erik Strebigis featured as Templeton the Rat. CHARLOTTE’S WEB features live music, performed by musicians in the cast. This American folk band takes the audience from dawn at the farm all the way to the state fair with banjo, guitar, cello, violin, percussion, and a kazoo or two. CHARLOTTE’S WEB is recommended for all ages.

Broadway In Chicago was created in July 2000 and over the past 14 years has grown to be one of the largest commercial touring homes in the country. A Nederlander Presentation, Broadway In Chicago lights up the Chicago Theater District entertaining well up to 1.7 million people annually in five theatres. Broadway In Chicago presents a full range of entertainment, including musicals and plays, on the stages of five of the finest theatres in Chicago’s Loop including the Bank of America Theatre, Oriental Theatre, Cadillac Palace Theatre, the Auditorium Theatre of Roosevelt University and just off the Magnificent Mile, the Broadway Playhouse at Water Tower Place.

Founded in 1996, Emerald City Theatre creates theatre experiences that inspire early learners through play. Emerald City is one of Chicago’s most attended non-profit theatres, with an annual programing reach of 80,000. Through a rigorous collaboration between innovating artists and leading educators, Emerald City develops new work for young audiences, with over 29 world premieres; produces professional productions at the Apollo Theater in Lincoln Park, The Broadway Playhouse at Water Tower Place, and the Little Theatre; and provides acclaimed educational programming throughout Chicago through Emerald City Theatre School.