SHERLOCK HOLMES and The Case of The Dead Play 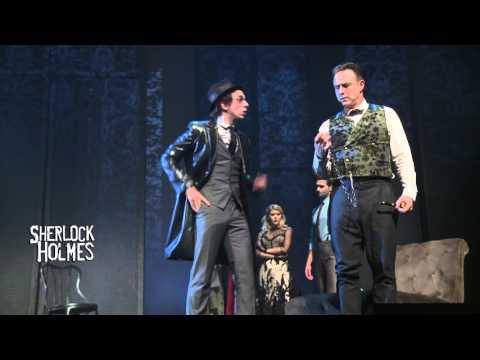 What happens when you take a rambling script, mediocre actors, Monty Python and you package them for Broadway? You get the Sherlock Holmes, now in a one-week, pre-Broadway tour at the Oriental Theatre. Now I am sure this looked good on paper when the producers got the idea of harnessing the current mania for everything Sherlock Holmes and putting pop television stars in a play that won 5 “prestigious” Montreal English Theatre Awards and played to sold out houses in Montreal in 2013. However, what has materialized had many trying to comprehend what was going on, leaving the theatre during the show and lukewarm applause at the end of the first act. I truly felt bad for the actors who were working their tails off trying to make us laugh.

Heading the cast is David Arquette, a fourth generation actor from one of the most prestigious acting families in Hollywood (Barrymore’s they are not) whose characterization of the famous English detective created by Sir Conan Doyle consists of a bizarre mix of Monty Python, a silly queen and strained voice that is starting to go. I am sure this is the direction and characterization of deceased playwright Greg Kramer and director Andrew Shaver ( I feel sorry for Arquette as he is a decent and respectable actor however better suited to the small screen). By forcing this slant on the character I never connected with or took him seriously and therefore, I checked out (I noticed several people around me that were dozing off).

As his sidekick Dr. Watson television star James Maslow does not fare much better. I was never sure what his character was about and with his diction I had a hard time understanding what he was saying. He was also playing at Monty Python but many of the jokes fall flat. Maslow has some really good acting credentials so once again I place blame on the horrendous script and incomprehensible style of the direction.

The most incomprehensible performance however goes to actress Renee Olstead who plays Lady Irene St. John. In her bio it states that she is a vocal artist who recorded two albums. However I quite literally could only catch a word or two from each of her lines that I could understand. Not only is she forcing her voice to project she has a speech impediment that makes her lines come out garbled (I will admit that I had never seen her on television and knew nothing of her fame so I am only judging her on her current performance).

The remaining ensemble is hard working but stuck in the same nightmarish Monty Pythonesque style as the three leads. Very few laughs occurred during the two and a half painful hours and people continued to leave during the second act.

I would normally give a plot outline for a show that I am reviewing but I really still have not figured it out as it is a compilation of many different murder mysteries that never connect. I believe this is supposed to be some spoof on Sherlock Homes and his deductive prowess. However by camping him up we lose any real foundation that brings credibility and pathos. Combine that with the pacing going so quickly and the incomprehensible diction I lost much of what was going on.

When I review a show I am always looking for really good, strong points within it which I can highlight. In this production I single out Itai Erdal’s fine lighting design which provided the proper atmosphere for a Sherlock Holmes mystery. James Lavoie’s set and costume design serves the fast moving action of the plot well but offers nothing ingenious which stands out. In all, it had the feeling of a community theatre production.

Those who read my reviews know that very seldom am I this harsh in a review as I know firsthand what it takes to bring a production to life and have great respect for people with the guts to tackle it. And I respect the actors for agreeing to take it on. I fault the creative team for their lack of good judgement as I expect they will lose their shirts. With this production it would have been better off left an idea on the table and instead of a pre-Broadway production.

Sherlock Holmes is in a one-week limited engagement at the Oriental Theatre through November 29th. Tickets range from $21-&87 and may be purchased through the Broadway In Chicago Ticket Line at (800) 775-2000.