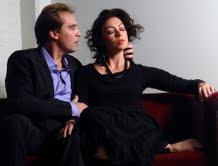 Ryan Kitley and Kate LoConti in a publicity image for Shattered Globe Theatre’s production of BURN THIS by Lanford Wilson, directed by Linda Gillum. Photo by Sean Park.

Shattered Globe Theatre kicks off its 2012/13 Season with BURN THIS by Lanford Wilson, directed by Linda Gillum, playing October 18 – November 18, 2012 at Theater Wit, 1229 W. Belmont Ave. in Chicago.  The production features Shattered Globe ensemble members Kate LoConti and Brad Woodard, with Ryan Kitley and Jake Szczepaniak.  Tickets for BURN THIS are currently available at www.shatteredglobe.org or by calling (773) 795-8150.

Set in a bohemian loft on the Lower East Side of Manhattan, Lanford Wilson’s BURN THIS is a penetrating exploration of four violently opposing characters scrambling to regain control over their lives. Dancer-turned-choreographer Anna has built a life with her two gay roommates, advertising executive Larry and her artistic partner, Robbie – until Robbie’s untimely death.  With the help of Anna’s longtime boyfriend, Burton, she and Larry have just begun to make sense of their new reality when their lives are suddenly turned upside down by the unexpected arrival of Robbie’s older brother, Pale. It is Pale’s presence – and the tension it generates – that forces each character to reexamine life, art, and passion.

“Shattered Globe has long been recognized for its productions of works by eminent American playwrights, so we’re delighted to open our 21st season with our first production of a Lanford Wilson play: his contemporary classic Burn This — an examination of life, loss and love in urban American in the 1980s… and now,” comments Shattered Globe Artistic Director Roger Smart.  “Now in its 21st year, Shattered Globe strives to remain a dynamic, questioning and vital voice in Chicago.”

Lanford Wilson is a Pulitzer Prize-winning American playwright whose best known works include Balm in Gilead, The Hot L Baltimore, Fifth of July, Talley’s Folley and Talley & Son. He was a co-founder of New York’s Circle Repertory Company, where many of his plays were first produced.

Linda Gillum is an Artistic Associate with Remy Bumppo Theatre where she has performed in more than a dozen plays and directed An Immigrant Class for thinkTank.  She was previously a member of Defiant Theatre where she performed in many plays and directed The Skriker, Flaming Guns of the Purple Sage, Burning Desires, and The Ugly Man.  Other directing credits include Accidental Death of an Anarchist (Next Theatre), Vikings: A Musical in Two Axe! (Noble Fool), The Underpants (Timberlake Playhouse), Amahl and the Night Visitors (Station Theatre), Far Away (Carthage College), Necessary Targets, and Lanford Wilson’s Talley’s Folly (Illinois Repertory Theatre).

Shattered Globe Theatre was born in a storefront space on Halsted Street 21 years ago. Since then, SGT has produced more than 60 plays, including 9 American and World premieres, and garnered an impressive 42 Jeff Awards and 97 Jeff Award Nominations as well as the acclaim of critics and audiences alike. Shattered Globe presents an eclectic mix of plays, intimate character driven selections, which speak to the universal aspect of what it means to be a part of the human experience.