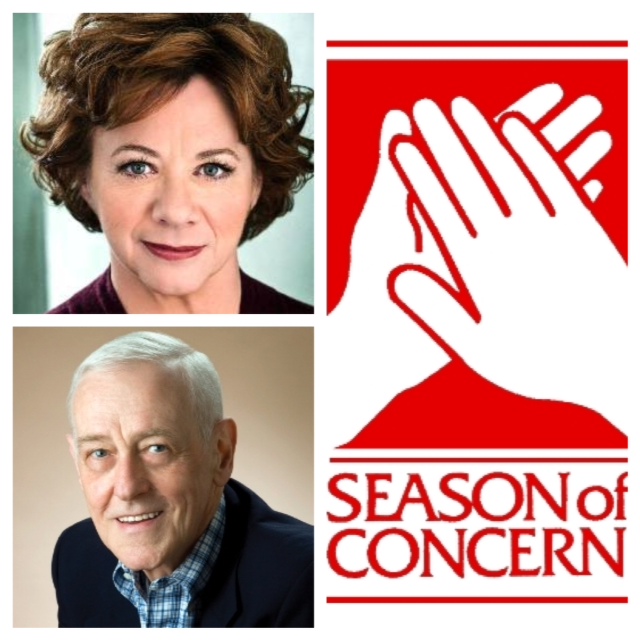 Season of Concern, the Chicagoland theatre community’s fundraising effort providing compassionate care to those in our community living with the effects of catastrophic illness or health emergencies, will be hosting the seventh annual Larry Sloan Awards on November 10, 2014, at Stage 773 featuring a performance of Postcards by James Prideaux by Steppenwolf ensemble members Rondi Reed and John Mahoney and directed by Steve Scott.

“I lost several close friends to HIV/AIDS during the early dark days of the crisis,” says Ms. Reed of her advocacy work with Season of Concern. “I remember the ones lost and deeply loved, and I do it for them. And for the disease that is not gone, although at times it is forgotten. So others will have help when they need it for the other ravages of life, as well as the virus.  Because that is what human beings need to do for each other.”

VIP tickets for the evening are available for $75 and include reserved seating, a champagne toast, and a grab bag containing a pair of tickets to one of Chicago’s hottest theatres. Participating theatres include Goodman, Steppenwolf, Court Theatre, About Face Theatre, and more! General admission tickets are available for $35 and include the champagne toast. All proceeds go directly to Season of Concern.

The Larry Sloan Awards, presented in memory of the Chicago theatre artist and first Executive Director of Season of Concern, are presented annually to individuals and organizations who have made exceptional contributions to supporting direct care assistance to individuals living with HIV/AIDS and theatre community members affected by HIV/AIDs as well as catastrophic illness or injury. This year’s recipients are accountant William C. Solar (Advocate Award), Lori Cannon from Vital Bridges (Heritage Award), and TimeLine Theatre Company (Partnership Award).

“TimeLine is honored and humbled to be recognized by Season of Concern in this way,” TimeLine Theatre Managing Director Elizabeth K. Auman said. “Chicago’s theatre community takes care of each other, and our audience responds to that spirit, never more generously than they did last season during our production of The Normal Heart. Partnering with Season of Concern is one way we can help make a difference for those in our community who are most in need.”

Postcards by James Prideaux – For thirty years Margaret (Rondi Reed) and Leonardo (John Mahoney) have been seated each day at adjoining desks, writing postcards to famous people, without ever getting any answers. Having run out of live personages to write to, they decide to address their cards to the famous dead — but, suddenly, much to their consternation, a reply does arrive. Its effect is shattering, and brings on a poignant revelation of the unspoken feelings which have, through all the years, lay dormant beneath the calm surface of their very correct relationship.

William C. Solar (Advocate Award) – Since 1997, William Solar has served as the accountant and auditor for Season of Concern. Throughout his 40-year career in public accounting, Mr. Solar has served audits for dozens of non-profits as well as serving as treasurer and a member of the executive committee for the Mayer Kaplan Jewish Community Center, Skokie, Illinois.

Lori Cannon (Heritage Award) Longtime AIDS activist Lori Cannon’s distinguished career spans three decades. Lori first made her mark in 1988 as co-founder of Chicago’s legendary Open Hand meals-on-wheels program for people with HIV/AIDS – a program which Season of Concern has supported for many years. Now part of the Heartland Alliance, her northside “GroceryLand” pantry center serves as a life-line for people who continue to struggle with HIV/AIDS. She is co-founder of Chicago’s Legacy Project Museum Walk and Youth Education Program, which is the world’s only outdoor LGBT Historic museum walk devoted to combating anti-gay bullying by celebrating LGBT contributions to world history and culture.

TimeLine Theatre Company (Partnership Award), named one of the nation’s top 10 emerging professional theatres (American Theatre Wing, founder of the Tony Awards®), Best Theatre in Chicago (Chicago Magazine, 2011) and the nation’s theater “Company of the Year” (The Wall Street Journal, 2010), was founded in April 1997 with a mission to present stories inspired by history that connect with today’s social and political issues. Over its first 17 seasons, TimeLine presented 59 productions, including nine world premieres and 20 Chicago premieres, and launched the Living History Education Program, which brings the company’s mission to life for students in Chicago Public Schools. Recipient of the Alford-Axelson Award for Nonprofit Managerial Excellence and the Richard Goodman Strategic Planning Award from the Association for Strategic Planning, TimeLine has received 52 Jeff Awards, including an award for Outstanding Production 11 times over 15 seasons of eligibility.