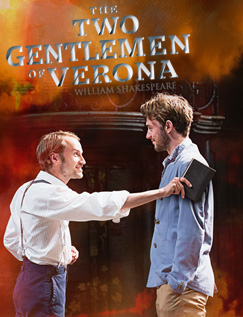 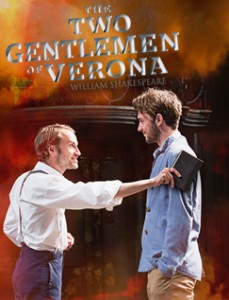 The Two Gentleman of Verona was broadcast on 3 September 2014. Encore screenings are now taking place.

Tickets are now on sale in cinemas – find your nearest cinema.

Valentine and Proteus are best friends until they both fall in love with the Duke’s daughter Silvia. But Proteus is already sworn to his sweetheart Julia at home in Verona, and the Duke thinks Valentine is not good enough for his Silvia.

With friendship forgotten, the rivals’ affections quickly get out of hand as the four young lovers find themselves on a wild chase through the woods, confused by mistaken identity and threatened by fierce outlaws before they find a path to reconciliation.

This was a live screening of our new production of The Two Gentlemen of Verona, which played in the Royal Shakespeare Theatre, Stratford-upon-Avon from 12 July – 4 September 2014. Visit the production website.

Additional cinemas across the UK and around the world will be added all of the time – sign up here for the latest updates.