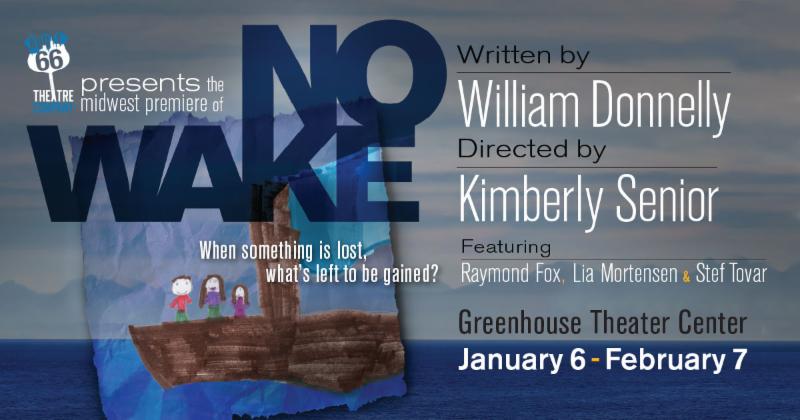 In NO WAKE, Nolan and Rebecca have moved on since their divorce – she to a new husband and he to a series of failed relationships. However, when an unexpected tragedy brings them back together, they’re forced to navigate a web of grief and guilt that leads to tears, laughter and ultimately, hope. At once deeply touching and filled with humor, NO WAKE takes an honest look at the grieving process and the unexpected consequences it can bring.

Comments Route 66 Theatre Company Artistic Director Stef Tovar, “I’m so thrilled for the opportunity to go back to where it all began. Our first production in 2008, On an Average Day, was a Los Angeles to Chicago transfer and one of the best experiences in our eight-year history. I’m excited to collaborate with our West Coast associate artists again and bring this beautiful play to their devoted patrons.”

Adds VS. Theatre Company Artistic Director Johnny Clark, “I’m excited to work again with Route 66 and my close friend and artistic colleague Stef Tovar. NO WAKE is as funny as it is heartbreaking. LA audiences are in for a wild ride.”

NO WAKE runs an hour and twenty minutes with no intermission.

William Donnelly’s (Playwright) plays have been produced by Portland Stage Company, Merrimack Repertory Theatre, Berkshire Theatre Group, Active Theater Company, Act II Playhouse, The Public Theatre (Lewiston, ME), Unicorn Theatre, Sacred Fools and Mill 6 Collaborative, among others. He has been the recipient of an Edgarton Foundation New American Play award and a Playwriting/New Theatre Works grant from the Massachusetts Cultural Council. Magnetic North was awarded the Clauder Competition grand prize in 2006. Other plays include Homestead Crossing, Motel Stories, The Gas House and Painted Alice (music and lyrics by Michael Mahler).

Kimberly Senior (Director) is a freelance director and the director of the 2013 Pulitzer Prize winning play Disgraced by Ayad Akhtar. Her New York and regional credits include: Disgraced (Broadway, Lincoln Center Theater 3), The Who and The What (La Jolla Playhouse, Lincoln Center Theater 3), Little Gem (City Theatre), Murder on the Nile, A Few Good Men (Peninsula Players), Mauritius (Theatre Squared, Fayetteville, AR). Her many Chicago credits include Rapture, Blister, Burn (The Goodman) The Diary of Anne Frank, Hedda Gabler, The Letters (Writers Theatre, where she is a Resident Director), 4000 Miles, The Whipping Man (Northlight Theatre), Want, The North Plan (Steppenwolf), My Name is Asher Lev, All My Sons, Dolly West’s Kitchen (TimeLine Theatre, where she is an Associate Artist), Disgraced (American Theater Company), The Great God Pan, After the Revolution, Madagascar, The Overwhelming and The Busy World is Hushed (Next Theatre) and Waiting for Lefty (American Blues), among others. Kimberly is adjunct faculty at Columbia College, and is a proud member of SDC.

About VS. Theatre Company
VS. Theatre Company, was founded in 2004 based on a passion for riveting stories and live performance in an intimate setting and recently was named “one of the top theatre companies of the last decade” by the LA Weekly, Standouts include: the West Coast Premere of Keith Bunin’s The Credeaux Canvas, which ran for nearly six months and played to sold out houses every night; In Arabia We’d All Be Kings (a co-production with The Elephant Theatre Company), named Best Production by the Los Angeles Drama Critics Circle in 2008; On An Average Day, co-produced in Los Angeles and Chicago with the Route 66 Theatre Company, garnering Critic’s Choice in the Los Angeles Times, Chicago Tribune and Backstage, and won or was nominated for several Ovation, Los Angeles Drama Critics Circle, and Jeff Awards; Blackbird by Adam Rapp, which was nominated for three Los Angeles Drama Critics Circle Awards including two for Best Lead Actor and three LA Weekly Awards including Best Production; and The Los Angeles Premiere of Neil LaBute’s The Mercy Seat, a co-production with the Ford Theatre as part of the Ford’s prestigious 2011 [Inside] The Ford Winter Partnership Program. The Mercy Seat won two Backstage Reader’s Choice Awards for Outstanding Performance and Production, won or was nominated for several LA Weekly Awards, and was voted a “Top Ten of The Year” by the Los Angeles Times.
VS. opened its own space in 2013- The Vs. Theatre (site of the former Black Dahlia Theatre) on Pico Blvd., and launched its first production there, The World Premiere of Ron Klier’s Cops And Friends Of Cops. The sold out production received excellent reviews including “Pick of the Week” by the LA Weekly, multiple theatre awards and nominations, and extended long after its scheduled closing night.

VS. just celebrated its tenth anniversary season with two hit shows, the Los Angeles Premiere of Itamar Moses’ Completeness and the World Premiere of Ron Klier’s Gus’s Fashions & Shoes, which was developed with the Route 66 Theatre Company in Chicago. Next up will be the West Coast Premiere of Tracy Letts’ adaptation of Anton Chekov’s masterpiece, Three Sisters. www.vstheatre.org

About Route 66 Theatre Company
Route 66 Theatre Company introduces, develops, produces, and exports new work for the stage. The road begins with our new play development process and reaches west, where our World and Chicago Premiere shows are given an advocate for further regional productions along the road less traveled from Chicago to Los Angeles. Since the company’s founding, Route 66 has produced 9 productions, 2 in two cities including a New York premiere, been nominated for ten Jeff Awards and won two. www.route66theatre.org