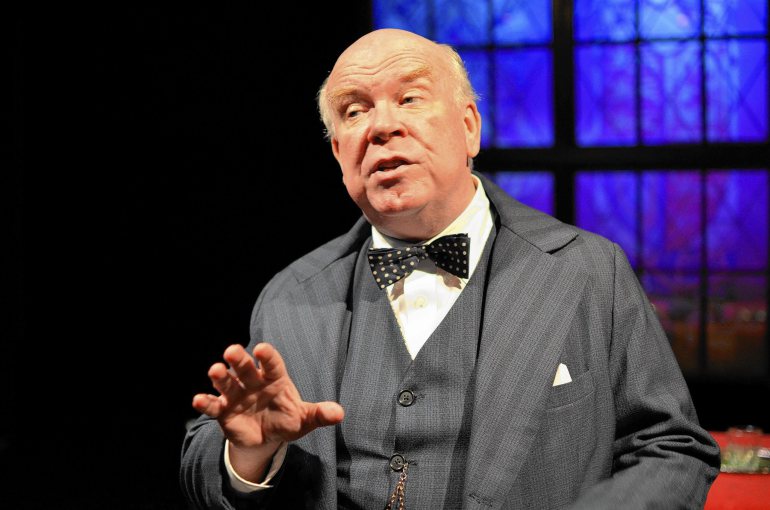 CHURCHILL, a new play adapted and performed by Ronald Keaton, will have its Off-Broadway premiere at New World Stages, 240 West 50thStreet. Performances will begin February 6th, following an acclaimed 2014 sellout world premiere engagement in Chicago. Under the direction of SoloChicago Artistic Director Kurt Johns, CHURCHILL is based on the life and writings of one of the greatest leaders of the 20th Century as well as the teleplay “Winston Churchill” by Dr. James C. Humes. The official opening night is set for Wednesday, February 18th.

Experience the man who famously proclaimed, “I am ready to meet my Maker. Whether my Maker is prepared for the great ordeal of meeting me is another matter…” In CHURCHILL, the influential Nobel Prize laureate discusses his failures and his successes; his love of art, liquor and women; and the bravery of Britain’s finest hour.

It is March 1946. In the past year, Winston Churchill has led Britain and the Allies to victory in the European Theatre of World War II. He has also shockingly been defeated for re-election as Prime Minister. Sitting in forced retirement with his wife Clementine at their Chartwell home, Churchill receives an invitation from President Harry Truman to speak in the States…at Westminster College in Fulton, Missouri, where he will deliver his legendary, emphatic “Iron Curtain” speech. He arrives in Fulton to an informal and esoteric gathering of friends and supporters, and shares his life in flashback and in storytelling.

In his more than four decades as an actor, SoloChicago Theatre founder Ronald Keaton has established himself as one of Chicago’s most dependable and versatile character actors at the Goodman, Chicago Shakespeare Theatre, Marriott’s Lincolnshire Theatre, Drury Lane Oakbrook Terrace, Theatre at the Center, Theater Wit, and Oak Park Festival Theatre, among many others. His regional credits include roles at the Indiana Repertory Theatre, Houston’s Alley Theatre, the Nat Horne Theatre, and the Coconut Grove Playhouse in Miami.

Director Kurt Johns has numerous credits including The Mistress Cycle (by Jenny Giering & Beth Blatt) at the Auditorium Theatre, Iron, The Tale of the Allergist’s Wife, and Vincent in Brixton at Chicago’s Apple Tree Theatre, as well as the regional premiere of Lysistrata Jones at Chicago College of Performing Arts. Kurt performed in the Broadway productions of Aspects of Love and Chess. He played Enjolras in the First National Tour of Les Miserables, starred Off-Broadway in Sharon directed by Geraldine Fitzgerald as well as performing in Chicago at The Goodman Theatre, the Court Theatre, Marriott Lincolnshire Theatre, and Drury Lane Oakbrook Terrace.

Scenic and Lighting Design for CHURCHILL is by Jason Epperson, with Projection Design by Paul Deziel and Sound Design by Eric Backus.

CHURCHILL is a joint production of the Greenhouse Theater Center, SoloChicago, and the Wendy and William Spatz Charitable Foundation, with the support and permission of The Churchill Centre.

Performances will be Mondays at 7pm, Wednesday through Saturday evenings at 8pm, with matinees Thursday at 2:30pm, Saturday at 2pm andSunday at 3pm. Tickets are $65 and are available at www.Telecharge.com or by calling 212-239-6200.