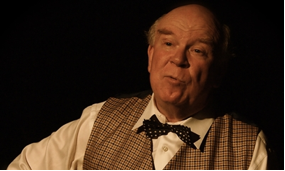 The Greenhouse Theater Center, in a co-production with Chicago’s new SoloChicago Theatre, is very proud to present Chicago’s RONALD KEATON in his highly anticipated solo performance of CHURCHILL, a full-length play about the legendary British prime minister, beginning August 1.  Adapted and written by Keaton and directed by Broadway and Chicago veteran KURT JOHNS, it is a sharp look at a man judged by many polls to be the greatest man of the 20th century.  We see Winston Churchill in 1946, about to address the audience at Westminster College in Fulton, Missouri.  His flights of memory take us to all corners  – his difficult childhood and upbringing, his high ambitions, his political “wilderness”, his leadership during WWII, his friendship with FDR…alloffered withhumor, insight and intelligence.

CHURCHILL plays August 1 – September 14 at the Greenhouse Theater Center, 2257 N. Lincoln Avenue in Chicago – Executive Producer JASON EPPERSON.  Performances are Thursdays – Saturdays at 7:30 PM and Sundays at 2:30 PM. Tickets are $25-35 and can be purchased at the Greenhouse Box Office; by e-mail at boxoffice@greenhousetheater.org; or in calling the theater (773) 404-7336.