It’s time to whistle a happy tune! Rodgers & Hammerstein’s classic movie musical The King and I will return to movie theaters for two days only, as part of Fathom Events and Turner Classic Movies’ TCM Big Screen Classics series. Marking the film’s 60th Anniversary, “TCM Big Screen Classics: The King & I” will screen on Sunday, August 28 and Wednesday, August 31 at 2:00 p.m. and 7:00 p.m. local time (both days) and includes specially-produced commentary from TCM host Ben Mankiewicz before and after the feature.

Siam, 1862. British schoolteacher and recent widow Anna Leonowens (Deborah Kerr) is sent to Siam as a teacher for the royal children but immediately clashes with their father, King Mongkut (Yul Brynner). Her modern, Western ways don’t sit well with the ruler – but over time, he slowly gains respect for her willingness to stand up to him. 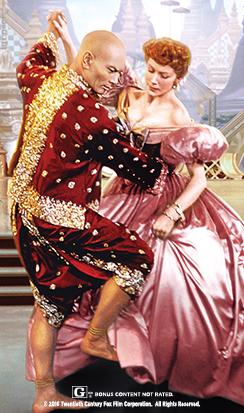 Tickets to “TCM Big Screen Classics: The King and I” can be purchased online at www.FathomEvents.com (theaters and participants are subject to change).

The national tour of Lincoln Center Theaters Tony Award® winning production of Rodgers & Hammerstein’s THE KING AND I launches in Providence, RI November 2016. THE KING AND I is directed by Tony Award® Winner Bartlet Sher and reunites the award-winning creative team from SOUTH PACIFIC and THE LIGHT IN THE PIAZZA.

This Fall Rodgers & Hammerstein, in Partnership with iTheatrics will release Getting To Know…THE KING AND I newly adapted for young people to perform!Getting To Know…THE KING AND I runs 60 minutes and remains true to the storytelling of the original show with transposed keys perfect for young voices. It includes a guide to staging and choreography DVD, a fully annotated production guide, vocal and accompaniment tracks and instant downloads so that you can get started on your production even before your materials ship. Licensensing to begin October 2016. Learn more at www.rnh.com/gtk