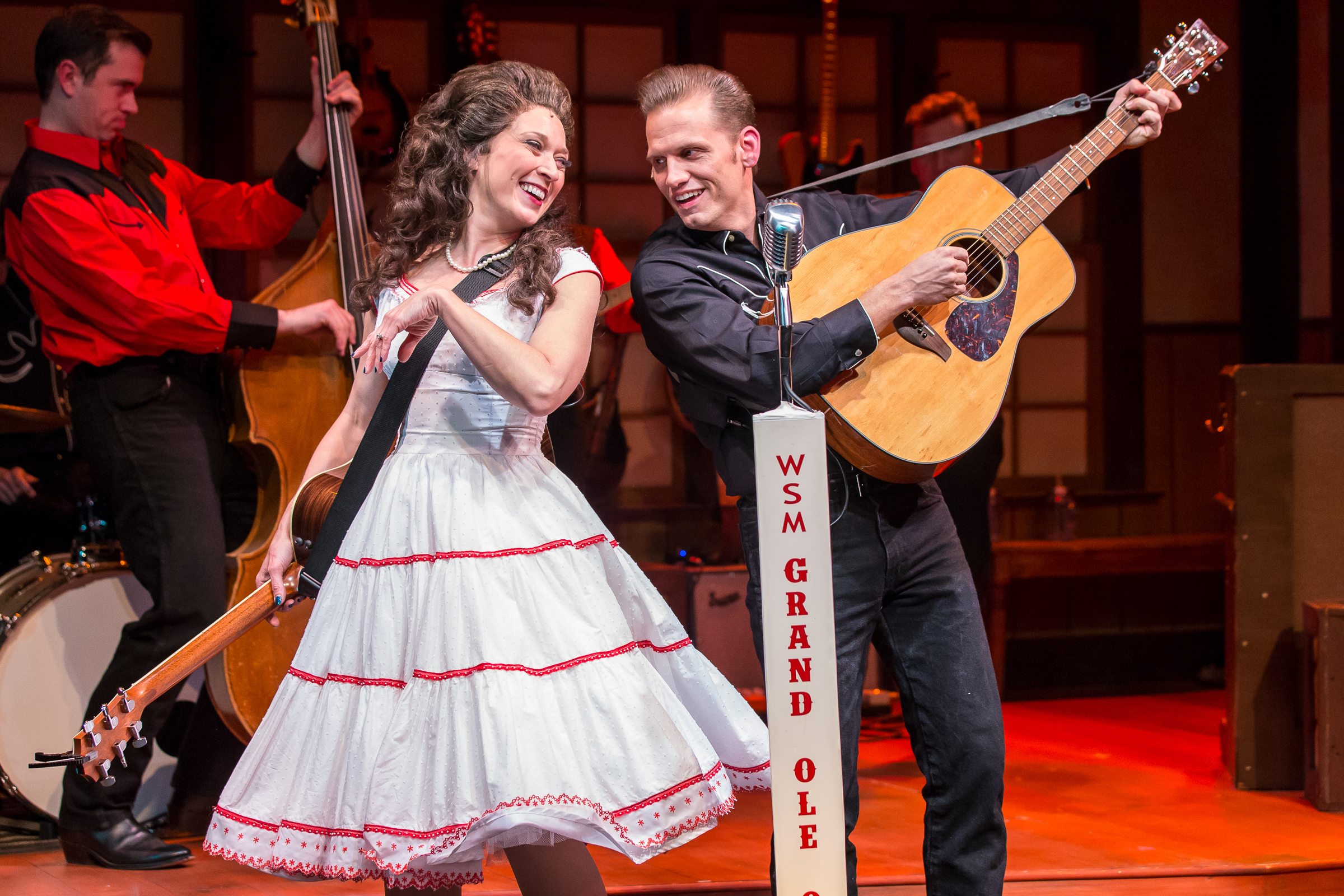 Mercury Theater Chicago, 3745 N. Southport Avenue, is thrilled to announce that RING OF FIRE: THE MUSIC OF JOHNNY CASH has been extended through November 1. The musical tribute has received rave reviews from critics and audiences alike and has broken sales records for Mercury Theater Chicago. “A good time with a great American artist!“ exclaimed Chris Jones of the Chicago Tribune. Hedy Weiss of the Chicago Sun-Times Highly Recommends the production saying it’s “A show ablaze with fire and unmitigated fun!”

Chris Jones also praised Kent M. Lewis’ portrayal of Johnny Cash saying, “Lewis does not wear the cloak of the Man in Black; he inhabits him.” Lewis explained that the key to transforming into Johnny each night is not to impersonate him, but to “remember that he was just a man trying to do the right thing, find the right word, hit the right note, trying to be a light under what seemed at times to be a veil of darkness.” Cory Goodrich added, “We are not impersonating them; we’re trying to capture the essence of them.” Michael Monroe Goodman explained that in order to take on the role of Johnny Cash that he “tried to understand what motivated him in life and on stage…what was his goal and what spoke to him in life.”

Producer Richard Friedman expressed his enthusiasm about the show’s success saying, “Our show has audiences leaping to their feet every performance. We’re finding that this is a great summer show for out of town visitors and locals alike.”

More than two dozen classic hits – including “I Walk the Line,” “A Boy Named Sue,” “Folsom Prison Blues,” and the title tune – performed by a multi-talented cast, takes audiences on an inspired musical journey that has generated standing ovations at every show! From the iconic songbook of Johnny Cash comes this inspirational musical about love and faith, struggle and success, rowdiness and redemption, and home and family.  This tribute has been revised and refined from its original production at Theatre at the Center and is presented as a joint endeavor between Mercury Theater Chicago’s Executive Director L. Walter Stearns, Theatre at the Center’s General Manager Richard Friedman, and Brian Russell (Director).

RING OF FIRE: THE MUSIC OF JOHNNY CASH is produced by special collaboration between a non-profit theater, Theatre at the Center in Munster, IN and a commercial theater, Mercury Theater Chicago.  Producers Richard Friedman and L. Walter Stearns are joined by Associate Producer Brian Russell.  This team has previously worked together at Northlight Theater and on the highly successful transfers from the suburbs to the city of ALWAYS… PATSY CLINE, MARK TWAIN AND THE LAUGHING RIVER and BUBBE MEISES.

Founded in 1991, Theatre at the Center is a year-round professional theater at its home, The Center for Visual and Performing Arts, 1040 Ridge Road, Munster, Indiana.  Its five Mainstage productions attract an audience of over 50,000 annually. Theatre at the Center operates on an Actors Equity contract and regularly employs the finest performers in the greater Chicago area for its year-round seasons of classic American musicals, new plays and comedies. Its mission is to present disciplines of the performing arts that are at once appealing, educational, and accessible to the entire community.