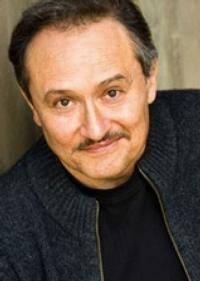 Teatro Vista’s board of directors announced today that ensemble member Ricardo Gutierrez will step into the role of Artistic Director on March 1, 2013, when Edward Torres, founder and current Artistic Director, will step aside to focus on an increasingly busy schedule of independent directing projects both in Chicago and nationally.

“We are thrilled that Eddie has found such tremendous success as a director and actor. His dedication to Teatro Vista over the decades has been invaluable, and Teatro Vista would not be what it is today – a nationally-recognized home of the best Latino theater – without his hard work and passion,” said Teatro Vista Board President Joan Pantsios. “Eddie has assured us that he will remain an active ensemble member and supporter of the theater.”

“As I finish my last season as Artistic Director, I look back and see the road that was paved by Teatro Vista in the world of theatre which is Chicago,” said Torres. “I am proud to have served as Teatro Vista’s Artistic Director for the last 15 years, and grateful for having had the opportunity to help give voice to Latino stories and Latino artists. Teatro Vista has created a body of work that is respected not only in Chicago but nationally. We will continue to produce theatre that is thrilling, insightful and engaging under the leadership of ensemble memberRicardo Gutierrez. Ricardo will lead Teatro Vista into the next phase of its growth while championing and empowering the voice of Latino artists.”

Torres’ upcoming projects include directing the Steppenwolf for Young Adults production of How Long Will I Cry?: Voices of Youth Violence with Artistic ConsultantKelli Simpkins, February 26-March 9, 2013, and directing the world premiere of Tony Award-winnerQuiara Alegria Hudes’ new play The Happiest Song Plays Last, April 13 – May 12, 2013 at the Goodman in association with Teatro Vista. Silver Mine Entertainment has also announced Torres is attached to direct Kenny D’Aquila’s new play Unorganized Crime starringChazz Palminteri.

“Teatro Vista has been fortunate to have had Eddie Torres’ keen leadership and creative vision and, although he is stepping down as Artistic Director, we are elated that he will continue to be a key ensemble member,” said Gutierrez, incoming Artistic Director. “I look forward to advancing our unique brand of innovative Latino stories, expanding our programming, establishing a permanent home and forging Teatro Vista into a nationally recognized theatre.”

Gutierrez is an ensemble member and directing associate of Teatro Vista where he directed last season’s hit Chicago debut ofCandido Tirado’s Momma’s Boyz. Other Teatro Vista directing credits include La Magica Posada and the staged reading of Yamaha 300 forGoodman Theatre’s Latino Theatre Festival. Elsewhere he staged Quita Mitos byTanya Sarachoat Next Theatre and Romeo and Juliet and The Magic Ofrenda for Glass Onion Theatre, where he is the co-founder and Artistic Director, and The Glass Menagerie for Absolute Shakespeare. He has directed more than 20 musical productions including Let the Eagle Fly forGoodman Theatre’s Latino Theatre Festival. He is also former Artistic Director of Canterbury Theatre in Indiana. While residing in Los Angeles from 1986 to 1994, Gutierrez was Artistic Director of Nosotros, an Artistic Associate of Theatre 40 in Los Angeles, where he directed the world premieres of Goods and Pasquini the Magnificent. Goods earned Gutierrez a Los Angeles Dramalogue Award for Directing.

As an actor Gutierrez most recently appeared last April at the Goodman in the world premiere ofCandido Tirado’s Fish Men, presented in association with Teatro Vista, the world premiere of Ground at Actors Theatre of Louisville, and the world premieres of Sunsets and Margaritas and Lydia at Denver Center Theatre Company. Additional Chicago credits include Mariela in the Desert and A Christmas Carol at the Goodman, The House on Mango Street, Our Lady of 121st Street and Jesus Hopped the ‘A’ Train at Steppenwolf, Esperanza Rising at Chicago Children’s Theatre, The Defiant Muse, Anna in the Tropics and Hortensia and the Museum of Dreams at Victory Gardens, and Race: How Blacks and Whites Think and Feel About the American Obsession at Lookingglass. His film credits include Stranger Than Fiction, You Are Going to Prison, Stand and Deliver and Running Scared. He can currently be seen on television as Alderman Mata in the Starz series Boss.