Review: Milwaukee Rep’s DOYLE and DEBBIE SHOW Hits You Like A Bolt of Lightning 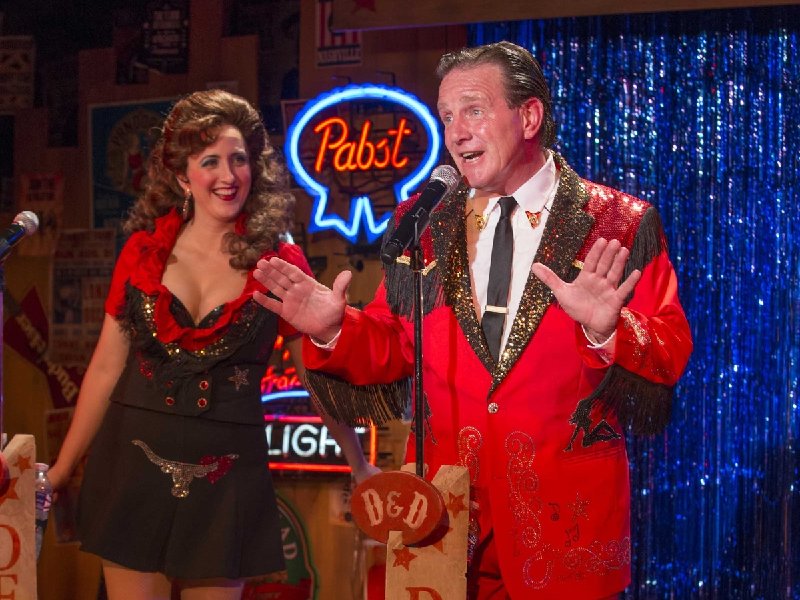 Doyle and Debbie Show, the critically acclaimed, rollicking spoof of country music and its iconic singing duos (think Porter Wagoner and Dolly Parton), has hit the Stackner Cabaret of the Milwaukee Repertory Theater like a bolt of lightning this September.

When the hit show came to Chicago, the Sun-Times called it “90 minutes of goofy perfection,” and theater critic Chris Jones of the competing Chicago Tribune described it as “hilarious, brilliant and drop-dead funny.”

Agreed.  But what words can I use to describe The Doyle and Debbie Show?

How about wacky, tacky, salty and sassy? And I wouldn’t have missed it for the world, y’all!

As a matter of fact, having attended theatrical productions in Milwaukee for more than 20 years, The Doyle and Debbie Show marks the first time a stage show made me laugh out loud – and helped me forget all the ills dominating the world stage right now, at least for about two hours.  That’s what good theater should do, folks.

Bruce Arntson’s play has a simple plot: Doyle Mayfield, a country music has-been, or as Debbie calls him, an “overlooked country legend,” is back on the road again, with a stop in Nashville with his most recent singing partner, Debbie Purdy.  But there’s nothing simple about this duo – each has had a hard life, as we discover through their onstage banter, offstage antics and toe-tapping tunes sung with a passion fueled by life’s twists and turns.

Songs include “When You’re Screwin’ Other Women (Think of Me),” “Barefoot and Pregnant,” which was written by Doyle himself from a woman’s point of view, “Blue Stretch Pants,” “Snowbanks of Life” and “Fat Women in Trailers.”  If you think these titles are bizarre, just wait until you hear the lyrics.  A song sung by Doyle, “Daddy’s Hair,” involves a lunch box, a hairpiece, and well, you just have to see it to believe it.

Michael Accardo and Erin Parker sing, act and dance their hearts out as Doyle and Debbie.  They receive loyal support from Bo Johnson as Buddy, who, we learn, has been with Doyle “through thick and thin, but mostly thin.”

Kudos to the creative teams at the Milwaukee Repertory Theater for its spot-on costumes, scenic designs and props that add to the hilarity and gaudiness of the show.  Doyle and Debbie are decked out in their signature red (think “red state” versus “blue state”) and black costumes, trimmed with an extra dose of rhinestones and tons of fringe; the set is a collage blending different honky-tonks in Tennessee; and a blizzard of country paraphernalia make the quaint Stackner Cabaret look positively tacky.

Director JC Clementz calls The Doyle and Debbie Show a “parody of country music,” but “also a love song to the genre.”  This “love song” is tastier than a box of pecan pralines, and it’s playing Milwaukee now through Nov. 2.  Here’s your chance, Chicago, to experience the side-splitting fun all over again or sample it for the firsttime.  Tickets start at $40 and can be purchased online at www.MilwaukeeRep.com, or by calling (414) 224-9490.  For group tickets call (414) 290-5340.

The Milwaukee Repertory Theater is located at 108 E. Wells Street in the heart of downtown Milwaukee.