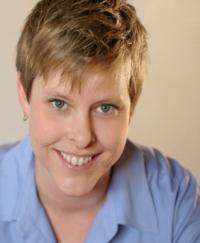 Raven Theatre’s Director of Education & Outreach and new ensemble member, Kelli Strickland, is one of ten arts professionals selected worldwide to receive the prestigious, nationally recognized DeVos Institute Fellowship at The DeVos Institute of Arts Management at The John F. Kennedy Center for the Performing Arts.

In September, Strickland begins the nine-month long fellowship program that includes extensive coursework in contemporary business practices and practical management experience in planning, presenting, and producing performing arts programming. Fellows are assigned a Kennedy Center mentor and have departmental assignments in addition to their ongoing coursework.

About the DeVos Institute Fellowship
The Fellowship at the DeVos Institute of Arts Management is an immersive program in arts management strategy designed to prepare mid-career arts managers for executive positions in today’s complex arts environment. Hosted at the nation’s cultural center and one of the largest and most dynamic performing arts institutions, the Fellowship offers a structured blend of academic training, hands-on work experience, independent and collective learning opportunities, and personalized mentoring. The paid Fellowships are full-time and last nine-months September through May.

Kelli Strickland has acted or directed with Bareboned Theatre Co., Bailiwick Repertory, Mary Arrchie, Women’s Theatre Alliance, 20% Theatre Co. and Avenue Theatre Co. She recently starred in the feature film Hannah Free appearing in over 50 film festivals internationally and winning multiple awards including ‘Best in Fest.’ Her one-woman show and break-out hit from Filet of Solo We’ve Got a Badge for That toured nationally and kicked-off Raven’s Evermore! Series. Kelli was on faculty in the Department of Fine and Performing Arts at Loyola University and is the Director of Education and Outreach of TAKE FLIGHT, Raven’s outstanding arts education program in the Chicago Public Schools and Chicago HOPES (CPS’s extension program in homeless shelters) along with select social service agencies. Now in its eleventh year, the TAKE FLIGHT provides students (2nd through 12th Grade) with an opportunity to learn the basic principles of theatre, and to use those tools as a means of improving self-esteem and collaboration.

Artistic Director Mike Menendian states, “From the beginning Raven Theatre has been an ensemble driven organization, committed to the collective efforts of artists with a broad range of skills including performance, writing, musical composition, design, and direction. I am excited to announce the addition of eleven new members to our Raven Core Ensemble. Each person brings a unique set of artistic skills and collectively the group adds a new level of vibrancy and artistic depth to our ever growing program.”

Michael Boone most recently appeared in Raven Theatre’s World Premiere of Dating Walter Dante. Other Raven credits include Cat on a Hot Tin Roof, A Clean Well-Lighted Place, The Room, Talk to Me Like the Rain and You Can’t Take it With You. Mike is a graduate of the Steven Ivcich Conservatory and has studied at the Royal National in London.