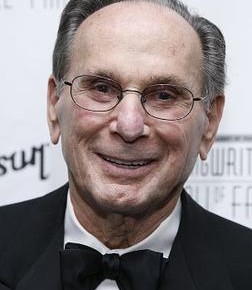 From The Associated Press: Hal David, whose simple, heartfelt lyrics made a perfect fit with Burt Bacharach’s quirky melodies and resulted in dozens of hit songs, including “Do You Know the Way to San Jose” and “Raindrops Keep Fallin’ on My Head,” died Saturday. He was 91.

Mr. David died of complications from a stroke Saturday morning at Cedars-Sinai Medical Center in Los Angeles, according to his wife Eunice David.

He had suffered a major stroke in March and was stricken again on Tuesday, she said.

“Even at the end, Hal always had a song in his head,” Eunice David said. “He was always writing notes, or asking me to take a note down, so he wouldn’t forget a lyric.”

Mr. David and Mr. Bacharach won an Oscar for “Raindrops Keep Fallin’ on My Head” (from the movie “Butch Cassidy and the Sundance Kid”), Grammys and Tonys for the songs from the hit Broadway musical “Promises, Promises,” as well as other top 40 hits including “Close to You” and “That’s What Friends Are For.”

Many of the duo’s lyrics and tunes continue to resonate in pop culture, including “I Say A Little Prayer,” ”What The World Needs Now Is Love,” and “This Guy’s in Love with You,” Their music was recorded by legendary singers including The Beatles, Barbra Streisand, Frank Sinatra, Neil Diamond and their longtime partner Dionne Warwick.

Mr. David joined the board of the American Society of Composers, Authors and Publishers in 1974 and served as president 1980 to 1986. He was head of the Songwriters Hall of Fame from 2001 to 2011, and was Chairman Emeritus at his death.

“As a lyric writer, Hal was simple, concise and poetic — conveying volumes of meaning in fewest possible words and always in service to the music,” ASCAP’s current president, the songwriter Paul Williams, said in a statement. “It is no wonder that so many of his lyrics have become part of our everyday vocabulary and his songs… the backdrop of our lives.”

In May, Mr. Bacharach and Mr. David received the Library of Congress Gershwin Prize for Popular Song during a White House tribute concert attended by President Barack Obama.

Mr. Bacharach, 83, thanked Mr. Obama, saying the award for his life’s work topped even the Oscars and Grammys he won for individual projects. Mr. David could not attend. Eunice David accepted on his behalf.

“It was thrilling,” she said. “Even though he wasn’t there, Hal said it was the highest honor he had ever received.”

More than 55 years after their first songs hit the airwaves, Mr. Obama said “these guys have still got it.” He noted their music is still being recorded by such artists as Alicia Keys and John Legend.

“Above all, they stayed true to themselves,” Mr. Obama said. “And with an unmistakable authenticity, they captured the emotions of our daily lives — the good times, the bad times, and everything in between.”

Mr. David was married to Eunice David for 25 years. He had two sons, Jim and Craig, from a previous marriage to Anne Rauchman.

A private memorial service was planned.