Prepare Ye For An Intimate GODSPELL

Merging religion into mainstream theatre is a tricky task. The work must walk a fine line of respecting the source material and allowing the interpretation to crossover to believers and non-believers alike. After all, saving collective humanity from ourselves is never an easy task. Just ask Jesus who, though try as he may spouting parable after parable, always seems to get the bad end of the stick, so to speak.

In the musical theatre world there are three big musicals that have achieved that success. The big kahuna was and still remains Webber and Rice’s JESUS CHRIST SUPERSTAR, which chronicles the 7 last days of Christ from Judas’ viewpoint. Prior to SUPERSTAR, the same team wrote JOSEPH AND THE AMAZING TECHNICOLOR DREAMCOAT, which has also remained a huge crossover hit. The third big religious show is Stephen Schwartz’ GODSPELL, which is getting an interesting treatment from Brown Paper Box Company.

GODSPELL was written initially as a play and like JOSPEH, started off as a college thesis project for John-Michael Tebelack. Stephen Schwartz added music and lyrics after the Café LeMama outing which gave the piece the structure it was missing. SUPERSTAR and GODSPELL both owe much of their success to the “Jesus Revolution” in America that occurred in the late 1960’s and early 70’s, much due to the anti-Vietnam war movement. As GODSPELL matured, it found a loyal audience off-Broadway and in other experimental theatres in the U.S. and Canada.

What differentiates GODSPELL from the other religious based musicals is that the book allows the director to pretty much create their own environment for the story to unfold. This, after all this is not a Passion-Play (until the last 10 minutes). Instead, it is through the parables found in Matthew and Luke that GODSPELL finds its story arch. Each parable, from the Good Samaritan to Lazarus is given a song (and dance), which usually morphs into a full-blown production number. 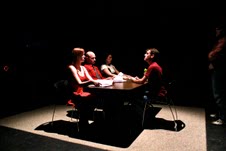 GODSPELL begins with philosophers “babbling” about their various philosophies. That is, until the trumpet blows and John the Baptist orders for them to “Prepare ye, The Way of The Lord”. As Jesus goes to get “cleaned up” the philosophers one by one become his disciples as he tells them he is here to “Save the People”. Each disciple expounds their lesson, with some of musical theater’s most remembered songs, including “Day by Day”. The musical begins to climax in the second act where the reality of the crucifixion set’s in, the Passion play begins and the lessons of disciples and their loyalty are tested to the extreme.

Director M. William Panek has set this GODSPELL in what looks a rehearsal hall/library though that is not clear, as there are only two bookshelves. Cell phones and iPads serve as the instruments in which the philosophies are transmitted and the initial trumpet siren is replaced by a guitar strum. As the “actors” assemble, they are given scripts to act out their parts akin to Cervantes giving his inquisition cellmates his manuscript of Don Quixote to perform. The “director” hands each actor their role/parable with the music accompaniment provided by the other members. The end result is a play within a play (within a play). An interesting concept in theory, but the actual execution is a problem.

The concept of actors playing their own instruments is nothing new. John Doyle’s recent Sweeney Todd as well as Court Theatre’s Man of La Mancha both had their characters in a mental institution and the inmates acted out the story and provided their own accompaniment. This concept only works if you have the actors capable of doing double (and sometimes triple) duty and also, if the space allows for this to happen. Neither is the case with this GODSPELL.

Though Mr. Panek, along with musical director Katie Colby, have brought together a great troupe, the actors who play instruments only do so mediocrely. The exception to this is Jake Mahler who effortlessly goes from guitar to banjo, to ukulele, all while giving great character depth to his John The Baptist and Judas. For the rest of the cast, the musical numbers are for the most part played very under tempo and without any having any percussion, fall flat. This is coupled by the severe echo problems of the unmiked Collaboraction theater space, which is notorious for sound vacuums. If a person is unfamiliar with the score, they are going to have a hard time understanding many of vocal numbers. “Alas For You”, was virtually inaudible. (On opening night, some of the guitars where severely out of tune, which then caused the ensemble to incur pitch issues but hopefully this will soon be rectified).

Aside from the sound issues, the main problem with this GODSPELL is that by having the actors re-enact the story by being handed scripts, they are twice removed from the characters they portray and are never able to actually connect to the base plot. This may work in the first act, but it becomes a big problem in the second when the show pivots and becomes the Passion. There is no palpable connection between the “disciples” and Jesus, not only emotionally but physically as well. Jesus is not even visible in the song “Where Are You Going?” in which two disciples ask Jesus is if they can follow him to the end. So, by the time we get to the crucifixion, the audience has already disconnected themselves as well.

There are some nice moments in this production. Andrew Lund is a very likeable Jesus, is vocally strong and has great on stage chemistry with Mr. Mahler. Nick Shoda does superior vocal work on “All Good Gifts” as does Pavi Proczko in “We Beseech Thee”. Michelle Limon is a powerhouse in “O Bless The Lord” and also keeps most of the other women on pitch in the ensemble numbers.

After the recent Broadway production and the tour that is likely to follow, big budget GODSPELL productions are sure to be a fixture for the next few years. Mr. Panek and company offer an interesting alternative to the pomp versions but one can only wish the vision was more realized.

For more information including tickets, visit brownpaperbox.org. For this and other theater listings visit theatreinchicago.com.