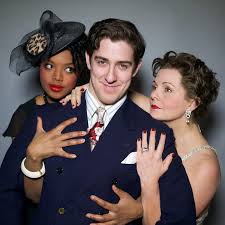 Porchlight Music Theatre is proud to present Pal Joey, book by John O’Hara, music by Richard Rodgers and lyrics by Lorenz Hart, April 20 – May 26, at Stage 773, 1225 West Belmont Ave. Directed by Porchlight Music Theatre’s Artistic Director, Michael Weber with music direction by Porchlight Artistic Associate Doug Peck (reuniting with Weber for the first time since their collaboration on Porchlight’s triumphant production of Assassins) and choreography by Porchlight Artistic Associate Brenda Didier, Pal Joey stars Adrian Aguliar, “Joey Evans,” Susie McMonagle, “Vera Simpson,” Laura Savage, “Linda English,” Matt Orlando, “Ludlow Lowell” and Sharriese Hamilton, “Gladys Bumps.” Previews are Saturday, April 20, 2013 at 8 p.m., Sunday, April 21, 2013 at 2 and 6 p.m. and Monday, April 22, 2013 at 7:30 p.m. Opening/Press Night is Tuesday, April 23 at 7:30 p.m. The regular run schedule is Fridays at 8 p.m., Saturdays at 4 and 8 p.m. and Sundays at 2 p.m. Tickets are $30 for previews and $39 for all other performances. Groups of ten or more may receive discounts on tickets purchased via the Groups Sales office at 773.777.9884. Single tickets for Pal Joey are on sale now and may be purchased at stage773.com or by phone at 773.327.5252.

Pal Joey, the O’Hara, Rodgers & Hart masterpiece introduced the world to the first anti-hero to propel a musical and features one of the greatest American musical scores including “I Could Write a Book,” “You Mustn’t Kick it Around,” “Zip” and “Bewitched, Bothered and Bewildered.” The plot, based on the short stories by The New Yorker columnist John O’Hara, focuses on the dirty deeds done by the charming cad Joey Evans (Adrian Aguilar) newly arrived in the Windy City having just been run out of St. Louis. Starting a new job at a seedy south side Chicago nightclub, Joey is soon juggling the affections of a naive shop girl (Laura Savage) and a married, wealthy society dame (Susie McMonagle), as well as sparring with an unscrupulous chorus girl (Sharriese Hamilton) who proves to be a worthy adversary to Joey. Once he has charmed the socialite into setting him up in his own joint, Chez Joey, Joey ditches the shop girl and is riding high, playing the big-time operator.  However, life for Joey is never easy and when he is threatened by a small time punk (Matt Orlando) with his affair being leaked to the socialite’s husband, his glamorous world is turned upside down.

This production will be like no other previously performed Pal Joey. Porchlight Music Theatre has been granted the exclusive rights by the Rodgers and Hammerstein Organization to the original 1940 Broadway version of the musical play, not seen in Chicago in decades. Audiences will get a rare opportunity to discover the complete compiliation of songs that were originally introduced on the New York stage by June Havoc, Van Johnson, Vivienne Segal, Stanley Donan. The same performance that launched young Gene Kelly, as “Joey Evans,” to Hollywood stardom. Other noted actors who have assumed the role include Harold Lang, Frank Sinatra, Bob Fosse, Steve Lawrence, Clifton Davis, Joel Grey, Kevin Anderson and Peter Gallagher. Additionally, Porchlight has been given permission to restore the long-lost musical number “I’m Talking to My Pal,” cut on the road prior to the original opening night.

Adrian Aguilar last starred with Porchlight Music Theatre as “Jon” in the critically acclaimed tick, tick…BOOM! for which he was nominated for the Joseph Jefferson Award as Best Actor in a Principal Role-Musical. Aguilar is currently appearing as “Artie” in Sunset Boulevard at Drury Lane Oakbrook. Other credits include “Kenickie” in Grease and  “Berger” in Hair at The Paramount Theatre, “Young Ben” in Follies at the Chicago Shakespeare Theater and “Danny Zuko” in The Original Grease at American Theatre Company. Prior to that he had various roles in Drowsy Chaperone, A Chorus Line, The Music Man, and Guys and Dolls at the Marriott Theatre.

Susie McMonagle makes her Porchlight Music Theatre debut with this production. She was most recently seen at Northlight Theatre in Black Pearl Sings! and Snapshots and on Broadway as “Fantine” in Les Miserables. McMonagle also has performed with first national tours of Billy Elliot (Mrs. Wilkinson and Mum), Mamma Mia (Donna), Les Miserables (Fantine), The Secret Garden and The Sound of Music. Her Chicago credits include At Wits End (Jane Grant) and Sideshow (Daisy) at Northlight, Rock n Roll (Candida) at the Goodman, and Man of La Mancha (M. Bane) at Court. She is the recipient of After Dark Awards, Critic’s Circle Award and nine Joseph Jefferson nominations.

Laura Savage makes her Porchlight Music Theatre debut with this production.  Her Chicago credits include “Zaneeta Shinn”/Associate Choreographer in The Music Man  at the Paramount Theater; Disney’s Beauty & the Beast, Follies with Chicago Shakespeare Theater; “Kathy Seldon” u/s performed in Singin in the Rain, Wizard of Oz, A Christmas Carol at Drury Lane; Legally Blonde, Guys and Dolls at the Marriott Theatre. And was nominated for Broadway World Awards Best Actress both “Percy” in The Spitfire Grill at BoHo Theatre) and “Hope” in Urinetown for Circle Theatre.

Matt Orlando makes his Porchlight Music Theatre debut with this production. Orlando’s credits include Once Upon a Time in New Jersey at the Marriott Theatre, Over the River and Through the Woods  at the Mercury Theatre, The Visit  for The Goodman Theatre, Eleven Rooms of Proust  with Lookingglass/About Face Theatres, the inaugural production at Drury Lane Water Tower,Grand Hotel and Proposals and Do I Hear a Waltz? at Theatre at the Center.  His nation and international credits include The Rink at Music Theatre Works and Galileo Galilei  at BAM and also staged at London’s Barbican Center.

Sharriese Hamilton was last seen on the Porchlight stage as “Felicia” in the Chicago premiere of A Class Act. Other credits include “Kesa/Medium/Actress” in See What I Wanna See and “Mariana,Sudabey” in Passing Strange at Bailiwick Chicago and “Donna” in We Three Liza’s at About Face Theatre-Steppenwolf Garage this past December.

Michael Weber previously served as artistic director for the inaugural season of Drury Lane Theatre Water Tower Place (now The Broadway Playhouse) and at Theatre at the Center (1998-2004). His productions of Assassins at Porchlight Music Theatre, Grand Hotel at Drury Lane Theatre Water Tower Place and She Loves Me at Theatre at the Center were each nominated for the Joseph Jefferson Award for Best Production-Musical. Additional directing credits include Fifth of July and Talley’s Folly at the Oak Park Festival Theatre, The Petrified Forest at Theatre at the Center, Beauty and the Beast at Marriott Theatre, Over the River and Through the Woods at The Mercury Theater, A Funny Thing Happened on the Way to the Forum at Pheasant Run Theatre, and Cirque du Symphony at Sears Center Arena. The recipient of two Joseph Jefferson Awards, he has written and directed the past seven Jeff Awards’ ceremonies. Weber’s regional acting credits include Annie Get Your Gun and Gypsy (both starring Patti LuPone) at Ravinia, Disney’s My Son Pinocchio at First Stage Milwaukee, Around the World in 80 Days at Cleveland Playhouse, The Winter’s Tale and Henry V at Chicago Shakespeare Theatre, It Had To Be You (starring Cindy Williams and Eddie Mekka) at Little Theatre on the Square, Angel Street at First Folio Shakespeare, and The Gifts of the Magi at Indiana Repertory. Weber is author of the new play, WAR of the WELLeS.

Doug Peck is one of Chicago’s leading musical directors and the winner of five Joseph Jefferson Awards (Porgy and Bess, Caroline, or Change, Carousel, Fiorello!, Man of La Mancha) and two After Dark Awards (Guys and Dolls, Hello, Again). Chicago credits include Dreamgirls, Shenandoah, Fiddler on the Roof, Cabaret, The Dead, A Catered Affair, Hair, Grey Gardens, Oh, Coward!, My Fair Lady, Beauty and the Beast, Raisin, Animal Crackers, and Mary Zimmerman’s acclaimed production of Candide. Peck can be heard on the recordings Bright Young People: The Songs of Noël Coward, Foiled Again Live, and Loving, Repeating: A Musical of Gertrude Stein. He is a creative partner with Goodman Theatre, an artistic associate with Porchlight Music Theatre, and a faculty member of the National High School Institute of the Arts.  A proud Northwestern University graduate, Peck also trained at the Interlochen Center for the Arts and is married to actor Rob Lindley. Mr. Peck is announced as the recipient of the 2013 Guy Adkins Award for Excellence in the Advancement of Music Theatre in Chicago.

Brenda Didier is a freelance choreographer/director based in Chicago and owns and directs the Lincolnshire Academy of Dance, now in its 14th successful season in a brand new 5000 square foot facility. Didier has received Joseph Jefferson Awards for both direction and choreography, After Dark Awards for choreography, the National Youth Theatre Award for choreography and the 2010 Broadway World Chicago fan favorite award for choreography. She has collaborated with Porchlight Music Theatre on eight productions, most recently The Gifts of the Magi and Putting It Together.  Didier has served as a guest instructor/choreographer for Northwestern University, Columbia College, the University of Illinois- Champaign/Urbana, the University of Wisconsin-Parkside and Carthage College. Didier has choreographed musicals, industrials, special events as well as productions for Second City’s mainstage and five installments of Cirque Shanghai at Navy Pier’s Skyline Stage the summers of 2007-2012.

Following last season’s hugely successful launch of The ICONS Gala, in tribute to Michael Bennett, The ICONS Gala, Celebrating the Art of Bob Fosse, is a salute to  Chicago’s own and Broadway director, actor, choreographer and star Bob Fosse. As part of this brunch celebration is the awarding of the third annual Guy Adkins Award for Excellence in the Advancement of Music Theatre in Chicago, which will be presented  to Doug Peck for his tireless work as a one of our nation’s leading music directors.

Tickets for Chicago Sings Kander and Ebb are $40 in advance and $50 at the door including a dessert buffet during intermission.

One of the most anticipated Chicago theatre annual events, Porchlight’s Chicago Sings… this year features the music of Broadway legends Kander and Ebb (composer John Kander and lyricist Fred Ebb). This one-night-only musical celebration, now in its eighth year, created by Porchlight Music Theatre Artistic Associates Rob Lindley and Doug Peck, features performances of Kander and Ebb classics by Chicago’s brightest musical theatre stars and hosted by Lindley with Peck on piano. Silent and live auctions and musical numbers from Cabaret to Chicago to The Scottsboro Boys and all the hits and hidden gems in between are part of this unforgettable night of music and unsurpassed performances.

Porchlight Music Theatre nationally recognized for developing innovative new works, reimagining classic productions and showcasing musical theatre’s rising stars, is in its 18th season as Chicago’s leader of music theatre productions. Porchlight elevates music theatre in Chicago within an intimate, close-up environment and provides a thoroughly modern and passionate experience, serving both audiences and artists alike.  With the vision of Managing Artistic Director Michael Weber and a 2012-2013 season that included the critically acclaimed Chicago premiere of A Class Act, the Chicago premiere of O. Henry’s The Gifts of the Magi, the Billie Holiday musical biography Lady Day at Emerson’s Bar & Grill (now running through March 10 at Stage 773,) Porchlight continues to be Chicago’s leading presenter of music theatre.   Porchlight’s rich history includes the staging of more than 50 productions with ten Chicago premieres and five world premieres.  BEST MUSICAL! A Completely Improvised Musical Comedy! was developed through “Off the Porch,” Porchlight’s new works program. The company has received a total of 73 Joseph Jefferson Award nominations resulting in 22 Jeff Awards.

Porchlight Music Theatre is partially supported by generous contributions from the The Fairmont Hotel-Chicago, Actors’ Equity Foundation, A.R.T League, the Arts Work Fund at the Chicago Community Trust, Chase Bank, a City Arts Grant from the Chicago Department of Cultural Affairs and Special Events, the Elizabeth F. Cheney Foundation, the Gaylord & Dorothy Donnelley Foundation, the Illinois Arts Council (a state agency), the MacArthur Fund for Arts & Culture at the Richard H. Driehaus Foundation, the National Association of Realtors, Peoples Energy and The Saints.