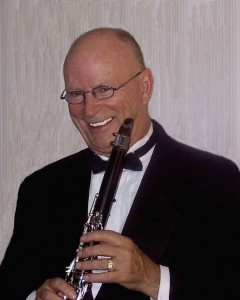 An Iowa native, Terry was a member of the US Marine Corps Reserves for five years. After college, where he majored in music and education, Terry honed his musical talent and soon developed a successful career in Nashville and New York City. When Terry decided to move to Florida, he quickly became one of the most in-demand musicians in the state. He was a band leader at Disney World’s Epcot Center for four years and, for a time, led the band at Rosie O’Grady’s, which was part of the popular Church Street Station entertainment complex in downtown Orlando.

In 1990, he became one of the original members of Bill Allred’s Classic Jazz Band, performing at jazz festivals all over the United States, Europe, and Asia. He has appeared at the North Sea Festival in Holland, the Birmingham, England, Festival, the Cork Festival in Ireland, the Bern Festival in Switzerland and many others. He, himself, has also toured the world as a guest artist on both clarinet and saxophone to rave reviews.

In the past, Terry has performed with the Tommy Dorsey Orchestra , The Tex Beneke Orchestra, The Les Elgart Band, The Jimmy Dorsey Orchestra, Ray Charles, Don Lamond, Chubby Jackson, Louis Bellson, Bob Haggart, Jake Hanna, Butch Miles and many others too numerous to name. In addition, he led the Artie Shaw Orchestra when former leader, Dick Johnson, was on hiatus, and Terry was always Buddy Morrow’s “first call” to sub for him with the TDO.In 1992, Terry was invited to form and lead a “Tribute to Benny Goodman” orchestra, which performed successfully for many years at such attractions as Busch Gardens in Florida and Virginia, Cypress Gardens and Silver Springs, as well as most of the major concert halls in Florida and across the country. In reviewing one of Terry’s albums, “Soul Mates”, Dick Bogle of the Portland Scanner wrote: “Buried in the various nooks and crannies of the country “Since then, Terry ‘s subsequent CD’s have earned him accolades from music critics and organizations such as Downbeat Magazine, and his latest release for Arbors Records also received rave reviews. According to JAZZ TIMES: “The sheer joy of Myers’ music comes out swinging as he bops an unaccompanied intro and plays…’Them There Eyes’.” From JERSEY JAZZ: “…from his first notes, I had my eyes opened with delight.”Now featured with the Tommy Dorsey Orchestra, Terry is an exceedingly charming host who puts the audience at ease and then wows them with his and the TDO’s musical presentation.

THE TOMMY DORSEY ORCHESTRA was formed in 1935 by Tommy Dorsey, trombone player and the most popular band leader of the Swing era. The ensemble achieved commercial success with their warm ballads that showcased popular crooners like Jack Leonard, Edythe Wright and Frank Sinatra. Frank Sinatra’s career blossomed with Dorsey and with Sinatra’s vocals, the band became more successful than ever. The band’s most recognizable songs include “Night and Day,” “I’ll Never Smile Again,” “Marie,” “On the Sunny Side of the Street,” “Song of India” and “Skylark.” THE TOMMY DORSEY ORCHESTRA had 286 Billboard chart hits, with seventeen number one hits in the 1930s and 1940s. “I’ll Never Smile Again,” featuring Frank Sinatra on vocals, was number one for twelve weeks on the Billboard pop singles chart in 1940. “In the Blue of Evening” was number one on the Billboard pop singles chart in 1943. The orchestra continued to perform and record under Dorsey’s leadership until his death in the late 1950s. Dorsey was posthumously inducted into the Grammy Hall of Fame in 1982.

THE TOMMY DORSEY ORCHESTRA was revived in the 1970s and has continued to perform for decades. The orchestra is currently under the leadership of Terry Myers, a world-renowned clarinet and saxophone player, and delights audiences around the world with its explosive Big Band sound.

The performance schedule for THE TOMMY DORSEY ORCHESTRA is as follows: Monday, October 28 at 1:30 p.m., and Tuesday, October 29 at 1:30 p.m. Show-only tickets are $55. Lunch and show tickets are $70. Subscriber and group discounts are available. For reservations, call the Drury Lane Theatre box office at 630.530.0111, or TicketMaster at800.745.3000. For more information, visit www.drurylane.com.