Podcast with The Book of Mormon’s JAMES VINCENT MEREDITH

Podcast with The Book of Mormon’s JAMES VINCENT MEREDITH from SHOWBIZ CHICAGO on Vimeo. 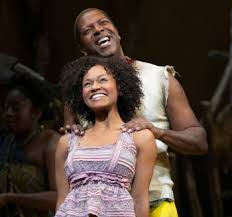 Steppenwolf ensemble member James Vincent Meredith discusses his role in the mega hit musical The Book of Mormon and other highlights from his remarkable career on stage, screen and television.

THE BOOK OF MORMON holds the record for the biggest weekly gross in the history of the Bank of America Theatre.  The production has played to over 100% of capacity every week since it opened, and had the highest advance for this length of an engagement in Chicago theater history.

THE BOOK OF MORMON launched its Second National Tour at Chicago’s Bank of America Theatre on December 11, 2012 and will have played 43 weeks and 344 performances by the time it leaves Chicago.  The Chicago engagement represents the longest run ofTHE BOOK OF MORMON outside of New York. When it departs Chicago, the Second National Tour will travel to Denver, San Francisco, Los Angeles and other cities in the 2013-2014 season.

Tickets are available at all Broadway In Chicago Box Offices (24 W. Randolph St., 151 W. Randolph St., 18 W. Monroe St. and 175 E. Chestnut), the Broadway In Chicago Ticket Kiosk at Water Tower Place (845 N. Michigan Ave.), the Broadway In Chicago Ticket Line at (800) 775-2000, all Ticketmaster retail locations (including Hot Tix and select Carson Pirie Scott, Coconuts and fye stores), and online at www.BroadwayInChicago.com.  Prices range from $45 – $200. Groups of 15 or more can call (312) 977-1710 to purchase tickets. THE BOOK OF MORMON also conducts a pre-show drawing at the box office for each performance, making a limited number of tickets available at $25 each.