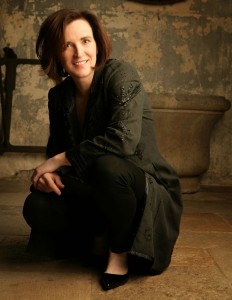 On Smash, her debut on Concord Jazz, Patricia Barber reiterates her unique position in modern music as a jazz triple-threat – imaginative pianist, startling vocalist, and innovative composer. With a new band and a dozen new compositions, she also continues her two-decade crusade to retrieve the ground that jazz musicians long ago ceded to pop and rock: the realm of the intelligent and committed singer-songwriter, tackling even familiar subjects (like love and loss) with a nuance and depth beyond the limits of the Great American Songbook.

Once again – in the crisp chill of her vocals, as well as the fiery feminine intellect that informs her music and lyrics – Barber makes most of her contemporaries sound like little girls.

A prime example is the title track, where Barber paints the end of a love affair with subtly stated allusions to destruction: the erosion of edifices; a bloody road accident. The lines are more akin to poetry than conventional song lyrics, as she depicts “the crumbling of tall castles built / on kisses and blood / and dreams so like sand.” The song’s reprise compares “the sound of a heart breaking” to “the sound of / the red on the road” – a devastatingly effective mélange of synesthetic imagery. Aided by a raw, forceful guitar solo, the performance illuminates a counter-intuitive realization about loss:

“It just struck me, as it does everyone who experiences great loss, that on the outside, no one can tell,” Barber explains. “You go to the grocery store, and everything’s the same, which is shocking. It struck me that this is the sound of a heart breaking: silence. You’re alone. And I felt that this was an interesting juxtaposition, since the sound of a heart breaking should be the loudest, screamiest, shriekiest combination of sounds there could be.”

Barber has another song on the subject of “loud, shrieky” emotion: “Scream,” paradoxically set to a gentle, quiet melody that belies its message, and which has proved extremely popular with those audiences hearing it prior to this recording. “Scream / when Sunday / finally comes / and God / isn’t there . . . . the soldier / has his gun / and the war / isn’t where / we thought it would be.” As Barber points out in conversation, with only the slightest sarcasm, “It’s an angry song – and everyone wants that.”

Her anger finds a more whimsical (but no less impactful) outlet in the catchy “Devil’s Food,” written specifically from Barber’s perspective as a gay woman: “boy meets boy / girl meets girl / given any chance / to fall in love / they do . . . / like loves like / like devil’s food / like chocolate twice / I’m in the mood / for you . . . .” She wrote the song in reaction to last year’s highly publicized efforts to quash gay-marriage initiatives around the country:

“It made me mad, and it made me want to make a declaration – but to make it fun. I find one of the best ways to bring people to your perspective is of course to charm them, and music can always do that. That’s how I get a lot of people thinking about a lot of things. I mean, the lyrics are fairly graphic – ‘sweet on sweet, meat on meat’ – but the music is so beguiling, I think I make the case. And when it becomes clear that it’s turning into a gay disco song, it’s really fun watching people’s reaction, which is surprise and mostly delight.”

It’s not the usual territory trod by jazz singers and songwriters; we’re a long way from “The Man I Love.” (“Smart songs about the way we think and live, not just about the way we love,” wrote Margo Jefferson in The New York Times.)

Much of Barber’s magic lies in setting these words to music as fully evocative as it is coolly provocative. Many of her arrangements attain a thrilling friction between style and substance. (For a defining example, turn to “Redshift,” in which Barber weds the science-geek lyric – itself a miraculous marriage of physics and love – to the gentle lull of a bossa-nova beat.) Throughout the album, her Chicago-based quartet – comprising the superlative rhythm team of bassist Larry Kohut and drummer Jon Deitemyer, with the edgy and arresting John Kregor on guitars – functions as a translucent extension of Barber’s own musicality, while her piano work enjoys a prominence that some of her newer fans may not previously have experienced.

One song, “Missing” – perhaps the album’s most indelible portrait of heartache – came about in an unusual way: “This was a commission, I guess you could call it. A woman sent me a letter and her story, and a very small check, and asked if I could turn it into a song. It was sort of an outrageous request, but it really hit me, so I wrote it; it was my idea to take the story through the four seasons. In some ways, it’s the sleeper of the record. When I play this in concert, a lot of people cry at this one.”

The other songs on Smash represent the fruit of Barber’s decision to write what she calls a “syllabic song series”; these pieces resulted from a disciplined framework, based on the number of beats in each poetic line. (For instance, “The Swim” consists entirely of two-syllable lines; “Spring Song” has three such phonemes per line; “The Wind Song,” six.) “I studied the songwriters, but now I just study the poets,” she explains. “I’m trying to make the poetry of a finer order. But I still need to rhyme, because rhyme is rhythm, and rhythm is music.”

Audiophiles will be especially glad to know that Smashreunites Barber with her long-time recording engineer Jim Anderson (with whom she first worked in 1994, on her Premonition Records debut Café Blue.) Anderson – who is Professor of Recorded Music at New York University’s Tisch School for of the Arts – has again captured Barber’s music with the clarity and presence that led Stereophile Magazine to label Café Blue a “Record To Die For.” HDTracks and Mastered for iTunes versions of Smash are also available.

After her long association with Premonition and then Blue Note Records, Barber self-released her two most recent albums – recorded at Chicago’s legendary Green Mill, her weekly showcase for more than two decades – and had no plans to sign with anyone else at this point in her career. “I didn’t have a contract, or even a recording in mind,” she states. “I assumed that when I had a group of ten or so new songs I would probably put it out myself.” Halfway through this process, Barber received an offer from Concord, which she promptly turned down: “I was really enjoying the freedom of not having a label, especially in this environment, and just doing what I always do – trying to advance myself musically, practicing a lot, and locking in on what I consider a really good band.”

But the persistence of Concord producer Nick Phillips won out. “He came to see me, and he reminded me so much of Bruce Lundvall,” Barber recalls, referring to the former Blue Note president with whom she worked closely. “I had been grieving the loss of that professional relationship. And then Nick mentioned that he has great respect and admiration for Bruce. So we hit it off personally, and that’s what it takes for me.”

That, and the chance to take her time – to read poetry, practice piano, and do some gardening on a tract of farmland she owns in Michigan, a welcome getaway from city life in Chicago. That’s how Barber’s ideas take root and bloom. She remains an electrifying performer, but performance is not the most important aspect of her art. “My favorite part is the internal part – the research,” she points out. “All the interesting stuff happens inside your head and at the piano.”

Fortunately, those of us not in Patricia Barber’s head or at her piano still get to enjoy the fruits of that labor.