The Judas Redux team (led by Executive Producers Julia Albain and Corey Lubowich of Team StarKid fame) proudly announces a new production of The Last Days of Judas Iscariot by Stephen Adly Guirgis, and directed by Julia Albain. The Last Days of Judas Iscariot will be presented at Stage 773, 1225 West Belmont in Chicago, for 18 performances, August 23 – September 8, 2013.

The Last Days of Judas Iscariot tells the story of a court case over the ultimate fate of Judas Iscariot. Set in a time-bending, darkly comic world between heaven and hell, the play reexamines the plight and fate of the New Testament’s most infamous and unexplained sinner. The play uses flashbacks to an imagined childhood, and lawyers who call for the testimonies of such witnesses as Mother Teresa, Caiaphas, Saint Monica, Sigmund Freud, and Satan. 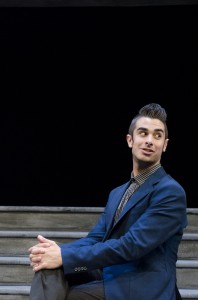 Julia Albain first directed The Last Days of Judas Iscariot through the University of Michigan’s Basement Arts in 2008.  That production included StarKid fan favorites Lauren Lopez, Joey Richter, Brian Rosenthal, and Darren Criss, who went on to star on the FOX hit “Glee” and the recent Broadway revival of How to Succeed in Business without Really Trying.  Judas Iscariot also marked one of the first (and last) times the group worked together before Team StarKid’s A Very Potter Musical took the internet by storm.  The overwhelming fan response spawned StarKid Productions and the popular parody musicals A Very Potter Sequel, Starship, and Holy Musical B@man!, as well as two sold-out national tours (directed by Julia Albain), and an engagement at Second City (directed by Corey Lubowich).

Judas Redux is an experiment in pulling back the curtain on how shows are created and produced by independent artists.  Starting with the launch of the Kickstarter campaign through closing night, the group will document the entire process of mounting a production of The Last Days of Judas Iscariot and open it up for both the community and online audiences to follow and participate in.  Updates about the project, including pictures, videos, blogs, and more, can be found at www.judasredux.com.  The campaign for Judas Redux was launched on Friday, March 26 and the project goal of $36,000 was met on Monday, April 1 (in under four days of being live). The campaign concluded on April 28 with a total of $62,809.