Trumpet virtuoso and conductor Stephen Burns is the Founder and Artistic Director of the Fulcrum Point New Music Project in Chicago. He has been acclaimed on four continents for his consistently and widely varied performances encompassing recitals, orchestral appearances, chamber ensemble engagements, and innovative multi-media presentations involving video, dance theatre, and sculpture.

Originally from Wellesley Hills, Massachusetts, Stephen Burns studied under Armando Ghitalla, Gerard Schwarz, Pierre Thibaud, and Arnold Jacobs at the Tanglewood Music Center, the Julliard School (BM/MM 1981-82), as well as in Paris and Chicago for post-graduate studies. He has won many prestigious awards including the 1981 Young Concert Artists International Auditions, 1982 Avery Fisher Career Grant, the 1983 National Endowment for the Arts Recitalist Grant, the Naumburg Scholarship at Juilliard, “Outstanding Brass Player” at Tanglewood and the aforementioned 1988 Maurice Andre Concour International de Paris. Sought after internationally for master classes, Mr. Burns is a former tenured Professor of Music at Indiana University and Visiting Lecturer at the Arturo Toscanini Foundation Corso MYTHOS in Bologna, Italy. He presently resides in Chicago with his wife, school psychologist, Kate Neisser and their twin sons Edward and Isaac. Stephen Burns is a Yamaha performing artist.

The entire Altered States film is shown complete with dialogue and sound effects accompanied by The Fulcrum Point orchestra led by Founder and Artistic Director Stephen Burns.  Corigliano, who was nominated for a Best Music, Original Score Academy Award™ for his work on Altered States, will be in attendance and will participate in a post-concert discussion with the audience at the Harris Theater.

“When I first saw Altered States in 1980, I was blown away by this spiritual, scientific and artistic trip,” said Burns.  “Other movies had sourced new art music (Kubrick’s 2001: A Space Odyssey, for one), but none before had such brilliant and profound film score by a single composer utilizing the complete spectrum of styles.  Since I was a student at Juilliard in 1980 I’ve dreamt of bringing this unique blend of abstract expressionism, neo-romanticism, electronic and world music to the stage.  The Fulcrum Point is where audacity and tradition come together.  Our programs have always connected the classical and popular cultures.  Altered States joins Blood on the Floor, Popcorn Superhet Receiver and THE NEWS as cultural milestones that will thrill and inspire the audience to be an audacious, musical adventurer.” 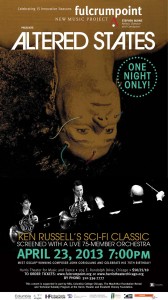 Altered States, directed by Ken Russell and starring William Hurt, Blair Brown and Bob Balaban, centers on a Harvard professor exploring other states of consciousness.  Through extensive experiments on himself using an hallucinatory drug and an isolation tank, he experiences drastic psychological transformation and then de-evolutionary, physical transformations where he struggles to hang on to his humanity.  The film is rated R with a running time of 103 minutes.

This concert is presented in part through support from the National Endowment for the Arts, Columbia College Chicago, MacArthur Foundation Rental and Technical Subsidy Program at the Harris Theater and the Elizabeth Cheney Foundation.

Tickets for Fulcrum Point’s performance of Altered States range from $25 to $50 with $10 tickets available for students and groups of 10 or more.  Tickets are available through the Harris Theater’s Box Office at 312-334-7777 or online at www.harristheaterchicago.org.

The Fulcrum Point performance is the centerpiece of “Forever Young,” April 22 – 25, a citywide celebration of Corigliano’s work which also includes programming by Gaudete Brass, The Chicago Chamber Musicians and PianoForte.  Other “Forever Young” events include:

John Corigliano, who officially turned 75 on February 16, 2013, is one of America’s most widely acclaimed composers.  Corigliano continues to add to one of the richest, most unusual, and most widely celebrated bodies of work any composer has created over

the last forty years.  Corigliano’s numerous scores — including three symphonies and eight concerti among over one hundred chamber, vocal, choral, and orchestral works — have been performed and recorded by many of the most prominent orchestras, soloists, and chamber musicians in the world.  Recent scores include Conjurer (2008), for percussion and string orchestra, commissioned for and introduced by Dame Evelyn Glennie. Among his many distinctions are the Pulitzer Prize in Music, awarded in 2001 for his Symphony No. 2; the Academy Award for his score to the 1999 film The Red Violin, four Grammy™ Awards (including three for Best Contemporary Composition) and the Grawemeyer Award for his Symphony No. 1.  One of the few living composers to have a string quartet named for him, Corigliano serves on the composition faculty at the Juilliard School of Music and holds the position of Distinguished Professor of Music at Lehman College, City University of New York, which has established a scholarship in his name.  For the past fourteen years he and his partner, the composer-librettist Mark Adamo, have divided their time between Manhattan and Kent Cliffs, New York.  More information is available at www.johncorigliano.com.