Podcast with BRIAN JUSTIN CRUM from SHOWBIZ CHICAGO on Vimeo.

One of Showbiz Chicago’s original guests returns! My friend BRIAN JUSTIN CRUM discusses is new role of Galileo Figaro in the national tour of WE WILL ROCK YOU, which will play the Cadillac Palace Theatre October 22-27, 2013. Brian also talks about his recent roles in Tarzan, Next To Normal and of course Altar Boyz. For more information visit  BroadwayInChicago.com, wewillrockyou.com or schoolswillrockyou.com

Broadway in Chicago, along with Queen Theatrical Productions, Tribeca Theatrical Productions, Phil McIntyre Entertainment and NETworks Presentations, is thrilled to announce casting is complete for the first North American tour of Queen and Ben Elton’s WE WILL ROCK YOU. The ‘rock theatrical’, built around 24 of Queen’s biggest hits, will play Chicago’s Cadillac Palace Theatre (151 W. Randolph) for a limited engagement Oct. 22‐27, 2013. 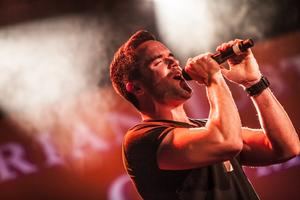 This hilarious, multi‐award‐winning and record‐breaking phenomenon is created by celebrated British comedian and writer Ben Elton (TV’s “Mr. Bean” and “The Young Ones”), and boasts a fantastic score of Queen’s biggest songs including “Another One Bites The Dust”, “Crazy Little Thing Called Love”, “We Are The Champions,” “Bohemian Rhapsody” and, of course, “We Will Rock You.”

Queen’s Brian May and Roger Taylor are musical supervisors to the show, taking an active role in casting the singer/actors and musicians for every production worldwide.

The show is in its 12th year at The Dominion in London’s West End, one of London Theatreland’s biggest theatres, making it the venue’s longest‐running production ever. WE WILL ROCK YOU is now officially the 9th longest running show in the West End and was crowned the UK’s favorite show at the 2011 Olivier Awards, the UK equivalent of the Tony Awards, in a category voted entirely by members of the public.

Outside of the UK, the show has now been seen in local productions in 17 countries, playing to an audience of over 15 million people.

The original production of WE WILL ROCK YOU is a Phil McIntyre Entertainment, Tribeca Theatrical Productions and Queen Theatrical Productions presentation. Book and direction by Ben Elton. Music and Music Supervision by Queen/Roger Taylor and Brian May. Musical staging and choreography by Arlene Phillips. Design and Lights by Mark Fisher and Willie Williams. Sound by Bobby Aitken. Costumes by Tim Goodchild.

Queen Theatrical Productions is a production entity created especially by the band’s parent company Queen Productions Ltd to handle the development and production of WE WILL ROCK YOU.

Since 1995, NETworks has produced and managed over 55 touring productions in the US., U.K. and internationally. Current productions include Disney’s Beauty and the Beast, Blue Man Group National Tour, Elf The Musical, Flashdance the Musical, The National Theatre of Great Britain’s production of War Horse, Memphis the Musical, and Cameron Mackintosh’s spectacular new production of Andrew Lloyd Webber’s The Phantom of the Opera.