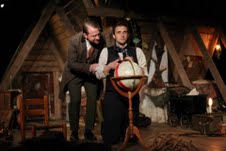 Something is amiss with Alvin Fisher. Join us this fall as we haunt the house at Signal Ensemble Theatre with a Gothic little ghost story selected as Top Five of the Fringe (Chicago Tribune 2006). That’s right, we’ve brought Funeral Wedding back from beyond the grave! Beloved by both company members and early fans of the group, this is the rare chance to see our second original production revived, revamped, and re-imagined for Halloween 2012. Audience members will have the opportunity to travel through a portion of the haunted Fisher Family home before arriving in Alvin’s attic for the play. Full of drawers to open, secrets to find, letters to read, candies to taste, characters to meet, and whispers to hear…this will truly be a very strange treat.

Ticket Prices:                 Individual tickets are $25 and can be purchased in advance starting September 15th at http://www.strangetree.org.  A limited number of RIP (Really Important Person) passes will be available online for $45. RIP passes include reserved front row seating, a limited edition screen print poster signed by the cast, and a glass of apple cider. Walk-up tickets will be available on a ‘first come, first serve’ basis at the door 30 minutes prior to show time. $15 Student and Industry tickets available at the door nightly, subject to availability.

Visit http://www.strangetree.org or call 773-598-8240 for ticket questions or availability.

Emily Schwartz is the Artistic Director of, and Resident Playwright for, The Strange Tree Group. For the Trees she has penned the Jeff Award-winning  The Three Faces of Doctor Crippen, as well as the critically acclaimed The Dastardly Ficus and Other Comedic Tales of Woe and Misery, Mr. Spacky, the Man Who Was Continuously Followed by Wolves, and The Mysterious Elephant, among many others. Emily is also a Resident Playwright of Chicago Dramatists, an Artistic Associate of Collaboraction, one of New City’s 2012 50 people who really perform in Chicago, and the Chicago Reader’s best playwright of 2008. Emily hates writing down her bio but loves kayaking.

About The Strange Tree Group

A collective of multifaceted individuals dedicated to creating intricate, intimate theatrical experiences that extend beyond the boundaries of a traditional stage. We produce works that inspire creativity not only in our actors but also in our audience. We Trees embrace the theatricality inherent in live performance and are committed to producing pieces that celebrate the strange and the magical; the dangerous and the fantastical; and the surprisingly usual nature of unusual behavior. The world is full of adventure…let us embark on this one together! For more information, please visit www.strangetree.org. 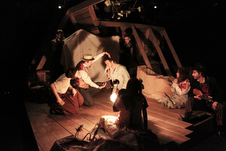 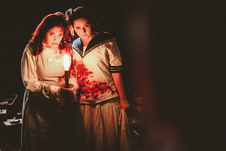