Pendleton’s Staging of THE BIRTHDAY PARTY Is Inspired 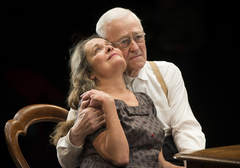 For those patrons who would like to witness what a true theatre ensemble is all about then you must catch Austin Pendleton’s new interpretation of Harold Pinter’s The Birthday Party which opened on Saturday at Steppenwolf.   Staged at the Upstairs Theatre space, Mr. Pendleton flanks the audience and places a large dining room table in between for the action to unfold; and boy does it unfold.

The Birthday Party was Mr. Pinter’s first full length play to be produced in 1957 was initially not well received.  However, like many major playwrights of that time period, his work is now considered a modern day classic.  As well it should be.  The dialogue is smart (and unique to the playwright), the characters well developed and the action is imposing.    The setting is a seaside boarding house in England where resident Stanley is recovering from a myriad of neurosis.   The innkeepers are as quirky as the guests and when two “strangers” come for a visit, the mood shifts from comedic to dangerous in a shear instant.

Mr. Pendleton’s cast is genius. John Mahoney and Moira Harris, Francis Guinan, Ian Barford, Marc Grapey and Sophia Sinise all bring an off-beat sensibility to their highly stylized characters and know how to get the optimum effect from Pinter’s manner of speech.   Like most of PInter’s work, the pacing can turn on a dime, and here you have actors who are always uniquely ready to deliver it.   To that end, Mr. Guinan is utterly spellbinding and more than ever has cemented him as one of my all time favorite actors….anywhere.

The Birthday Party is certainly not a work for everyone.  There were quite a few audience members surrounding me who made their opinions known, but in their dialogue, clearly did not understand or appreciate the playwright’s voracity of plot and subtext; nor did they understand the classically trained Meisner method that is there for all to absorb.  In fact the Pinter/Meisner symmetry really melded at the same time.  Though Meisner’s technique was developed decades before, it wasn’t really until the likes of Mr. Pinter that the actor was able to fully invest oneself in a modern setting.  Mr. Pendleton and his ensemble flourish in this realm of quirkiness.