Pat Boone Performs at Drury Lane For Two Shows Only, May 13th & 14th 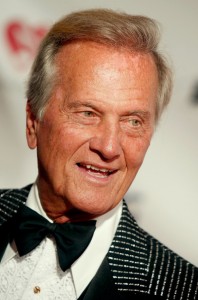 Iconic entertainer Pat Boone will perform two concerts only at Drury Lane Theatre on Monday, May 13 at 1:30 p.m. and Tuesday, May 14 at 1:30 p.m. Celebrating 75 years in show business, Boone has had nearly 40 “Top 40″ hits, has sold over 45 million albums and starred in more than 15 Hollywood films.

From 1955 to 1962, Boone had 54 hit singles.  During that time, he was second only to Elvis Presley on theBillboard charts.  Boone holds the distinguished record of having one or more of his songs appear on the charts for 220 consecutive weeks. His biggest hits include “Don’t Forbid Me,” “Love Letters in the Sand,” “April Love,” “Tutti Frutti” and “Long Tall Sally.” In the late 1950s, Boone started hosting his own ABC television series, The Pat Boone-Chevy Showroom, and began a film career that included roles in Journey to the Center of the Earth and Rodgers and Hammerstein’s State Fair.

Boone was inducted into the Gospel Music Hall of Fame in 2003.  He is also a member of the Christian Music Hall of Fame and a Golden Laurel Award Winner. Boone’s multifaceted endeavors in entertainment have also included producer, radio personality, record company head, TV station owner, and sports team owner.  He is the recipient of a Golden Globe Award for Television Achievement.