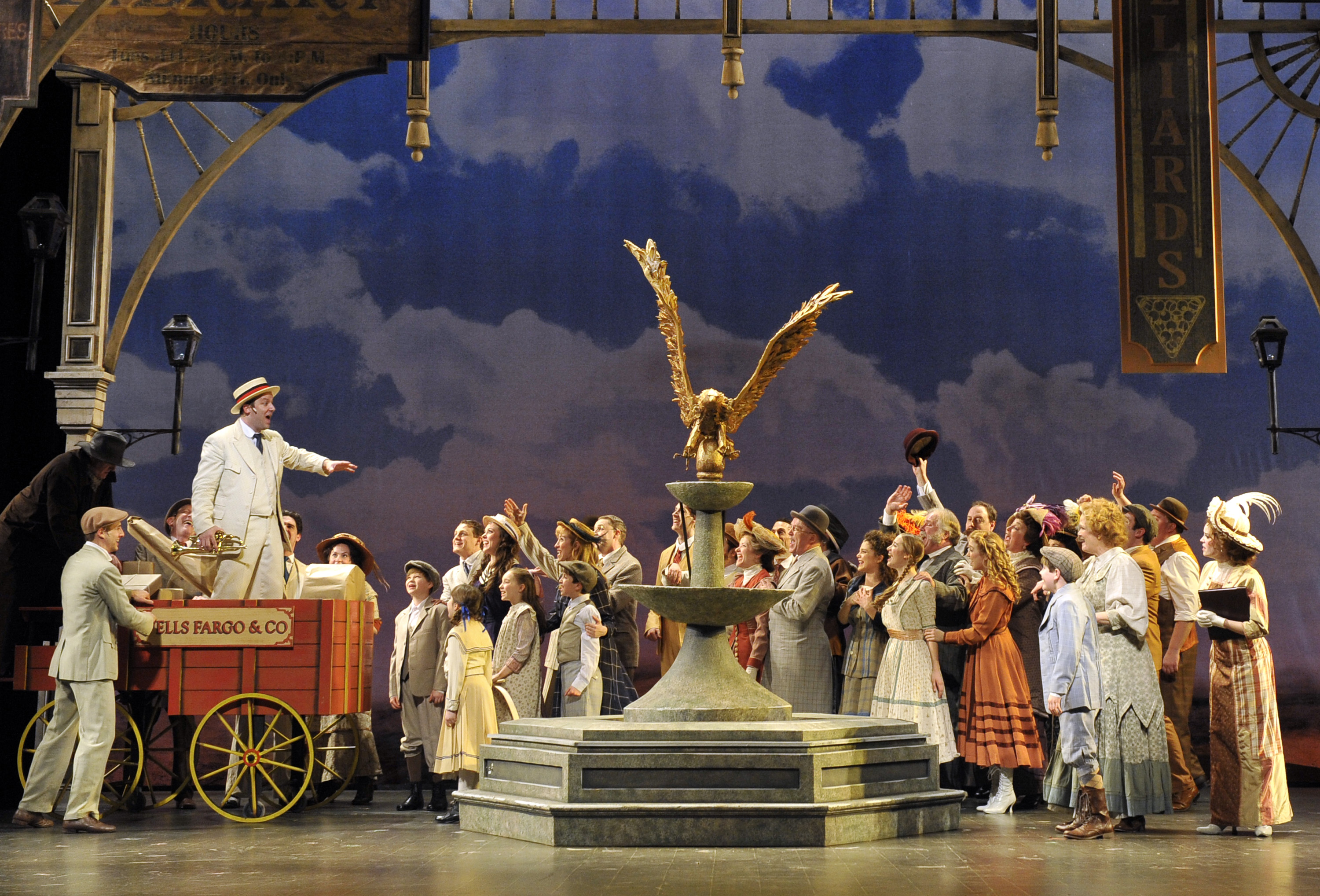 Meredith Wilson’s The Music Man is indisputably on of the greatest musical ever created and under the masterful direction of Rachel Rockwell it is getting one of its best revivals in the last twenty years at Paramount Theatre.

From the moment you walk in to the venerable theatre (for those that have never been or haven’t been in a while) there is an instant energy unfound in downtown theaters.  There was an excitement of Broadway openings of old, which came across from the staff to the patrons.  Everyone that was there (2,000 +) wanted to be there and that translated into an evening of fantastic musical theater that will not soon be forgotten.

In order for The Music Man to be done correctly, it needs to be done large and Ms. Rockwell was allowed the budget to pull out all the stops.   With a cast that tops thirty, an orchestra that equals that of any pop symphony and sets that are reminiscent of the original production, this is a feast for the eyes and ears that sticks to the basics and flies to success.

First mounted on Broadway in 1957, The Music Man was an instant hit wining five Tony awards including Best Musical, Best Actor In a Musical (Robert Preston) and Best Actress in a Musical (Barbara Cook).  Meredith Wilson’s score is still regarded as one of the best ever written for the genre.  Known for its rhythmic complexity as well as its traditional ballads, The Music Man contains some of the most memorable songs in musical theatre including “Ya Got Trouble”,  “Lida Rose”, “Till There Was You” and of course “Seventy Six Trombones”.    The 1962 film version was an even bigger hit and cemented Mr. Preston’s creation of the traveling salesman into legend. 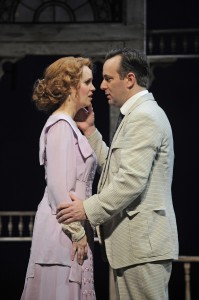 For those few who haven’t seen The Music Man, the story is set in 1912 River City, Iowa where a traveling salesman, known for mounting a con of getting a township to buy band equipment then never delivering, meets his match by falling in love with town librarian, Marian.  The community falls for Harold Hill’s pitch, though some are the wiser. As the musical unfolds, we see how Hill taps into a need the community has for a leader and the need a leader has for a semblance of community.

Stef Tovar steps into the role of Professor Hill and does so with great panache.  Though it takes him a few scenes to get into the rhythm, by the second act he has the audience eating out of his hand. The power in this production belongs to the remarkable Emily Rohm who gives a confident and honest portrayal of Marian Paroo.  Ms. Rohm owns one of the finest and powerful soprano voices heard in a very long time and makes Meredith Wilson’s score fresh at every level.

Ms. Rockwell also serves as choreographer and in doing so, the numbers and scenes transition seamlessly.   The other star of this production is musical director Michael Mahler who brings a vibrant freshness to the score.  The musical numbers each stand on their own and as usual Mr. Mahler knows how to bring out the best in the actors and musicians he works with.    Even with a large orchestra under his baton, Mr. Mahler innately lets the actor and musicians combine seamlessly, which is no easy task with a score such as this.

Whether you are a city dweller or a suburbanite, a trip out to Aurora via car, train or Wells Fargo Wagon to visit Professor Harold Hill for a few hours is the perfect way to spend a winter’s evening and revisit one of the greatest musical ever written now getting one of its best revivals to date.