“Our City, Our Shakespeare” premieres on WTTW Channel 11 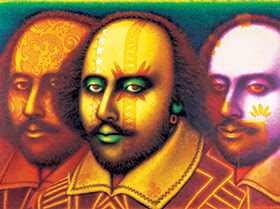 Chicago Shakespeare Theater (CST) along with Chicago’s civic and cultural leaders celebrate William Shakespeare’s 450th Birthday with the premiere of “Our City, Our Shakespeare,” a documentary exploring Shakespeare’s enduring presence in Chicago, featuring Chicago Shakespeare Theater, Lyric Opera of Chicago, Chicago Symphony Orchestra, Art Institute of Chicago, Joffrey Ballet, among others. Produced by Emmy award-winning HMS Media, the program premieres May 1 at 8:00 p.m. on WTTW Channel 11. Shakespeare’s 450th birthday on April 23 begins the internationally recognized Shakespeare Quadricentennial Celebration through 2016, marking 400 years of Shakespeare’s legacy since his death in 1616. On this occasion, Chicago’s cultural community heralds the prolific poet and playwright’s lasting impact on our lives—through our everyday speech and in cultural institutions, schools and neighborhoods across the city.

“Our City, Our Shakespeare” producer HMS Media has received 17 Emmy Awards, 23 Emmy nominations, four Ruth Page Awards, the Arts & Business Council’s ABBY Award and Gold and Silver Plaques from the Chicago International Film Festival for its broadcast specials about theater, dance, music and social issues, which have aired locally on WTTW and nationally on PBS. “Our City, Our Shakespeare” airs on WTTW Channel 11 on May 1 at 8:00 p.m., May 2 at 2 p.m. (WTTW Prime) and 7:30 p.m., and May 4 at 5:30 p.m.

All Chicagoans can join in on the birthday celebration in the coming weeks—whether at the bus stop, around the water cooler, inside the classroom, at home or out and about in the city. The following activities, events and performances offer a way for everyone, everywhere to bring Shakespeare into their lives:

Will’s 450 is the New 30 Quiz: April 21–May 11
Proving that Shakespeare’s words have passed the test of time, Will’s 450 is the New 30 Quiz features multiple-choice questions dealing with Shakespeare in pop culture and everyday speech, such as “Which Shakespearean phrase is the title of a current song?” and “Which of the following Shakespeare quotes inspired the title for a hit TV mini-series?” Not sure of an answer? Quiz-takers are encouraged to Google search answers, so they can see how “with-it” Will still is today. The quiz will be available between April 21 and May 11 atwww.chicagoshakes.com/birthday.

Shakespeare at the Newberry Library: April 21 at 6:00 p.m. & April 22–June 21
Those who want to dig deeper into Shakespeare’s vast and varied contributions to literature and theater can join CST Artistic Director Barbara Gaines in “Conversations at the Newberry” on April 21 at 6:00 p.m. for a discussion. Gaines will share the stage with Gail Kern Paster, director emerita of the Folger Shakespeare Library. This free event launches the Newberry’s The Bard Is Born exhibition of Shakespeare-related artifacts, including the Library’s treasured First Folio and Barbara Gaines’s personal annotated copy of the play script for Henry V from CST’s inaugural production in 1986. The exhibition is free and open to the public, April 22 through June 21.
Talk Like Shakespeare Day: April 23
Everyone is dared on Shakespeare’s Birthday on April 23 to bring out their “thee-s” and “thou-s” in observation of the annual Talk Like Shakespeare Day, an opportunity for citizens across the globe to bring the spoken words of Shakespeare into their daily lives. Penning 154 sonnets and 38 plays, Shakespeare is credited with contributing over 1,700 words and countless phrases to the English language, including “bedazzled,” “swagger,” and “new-fangled.” Shakespearean tips and useful expressions can be found at www.TalkLikeShakespeare.org.
Preview of “Our City, Our Shakespeare” on Chicago Tonight: April 23 at 7:00 p.m.

To experience Shakespeare up close and personal, theatergoers can catch a performance of Henry V, beginning on April 29 and running through June 15 in CST’s Courtyard Theater. This rousing finale to the 2014 season is directed by distinguished British director Christopher Luscombe in his Chicago debut. Confronted by the ferocity of war on the fields of Agincourt, the charming, freshly crowned King Henry must prove his worth as a man and king in the ultimate test of his leadership.

Joffrey Ballet’s Romeo & Juliet: April 30–May 11
Joffrey Ballet presents a modern retelling of Shakespeare’s tale of star-crossed lovers set to Sergei Prokofiev’s formidable score. Choreographed by Krzysztof Pastor and with live music performed by the Chicago Philharmonic, this production of Romeo & Juliet makes its United States debut at The Auditorium Theatre, April 30 through May 11.

CST and Chicago Philharmonic in Romantic Rapture: May 11 at 7:30 p.m.
The extended birthday concludes with a collaboration between CST and the Chicago Philharmonic on Sunday, May 11 at 7:30 p.m. at Pick-Staiger Hall in Evanston. Together, the two organizations present Prokofiev’s Romeo and Juliet as part of the evening’s Romantic Rapture event. Directed by Scott Weinstein and conducted by Scott Speck, actors and musicians bring to life one of Shakespeare’s most passionate and tragic tales.
For a full line-up of activities and events surrounding Shakespeare’s 450th birthday, seewww.chicagoshakes.com/450.