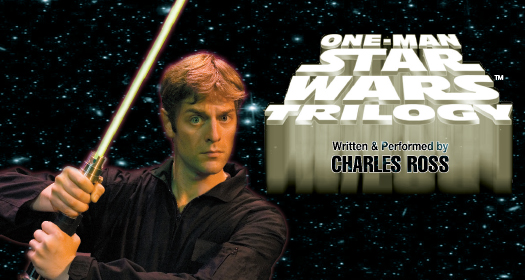 Charles Ross will stun you with his ONE-MAN STAR WARS TRILOGY.

Much of Ross’ childhood was spent in a galaxy far, far away, watching Star Wars videos over – and over – and over again. The result of this misspent youth is his hysterical ONE-MAN STAR WARS™ TRILOGY, where he single-handedly plays all the characters, sings the music, flies the ships, fights the battles and condenses the plots into one hilarious show!

If you’ve already seen the movies, read the books and named your first-born Skywalker, Ross’ zany take on Star Wars is right up your alley and sure to leave a lasting impression.

“Funnier than you could possibly imagine” – Spin Magazine

ONE-MAN STAR WARS TRILOGY is suitable for Star Wars fans from age 6 to Yoda!  NOTE: Audience members are invited to wear costumes, but no masks or weapons are allowed.