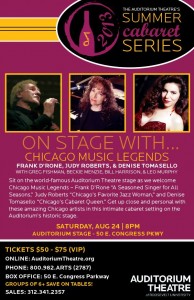 The Auditorium Theatre at Roosevelt University brought together Chicago Cabaret legends for a beautiful, hot, captivating evening of music for the finale of their 2013 cabaret summer series, which was a sellout.  The world-famous Auditorium Theatre stage welcomed Chicago Music Legends: Frank D’Rone “A Seasoned Singer for All Seasons,” Judy Roberts “Chicago’s Favorite Jazz Woman,” and Denise Tomasello “Chicago’s Cabaret Queen.”  for a beautiful evening of hot jazz and spell bounding cabaret music.  At this concert the audience is able to “Get up close and personal” with these amazing Chicago artists while sipping on hand-picked wines and gourmet cheese trays in this intimate cabaret setting on the Auditorium’s historic stage. This concert produced by “Barb Bailey Entertainment”, was incepted with Auditorium Theatre Director, Brett Batterson who wanted to produce a legendary show for a “legendary theater”. Brett Batterson knew that he wanted to feature Cabaret Queen Denise Tomasello and at first wanted to pair her with a young rising cabaret artist. However, he then thought he would have a difficult time finding a brand new artist who could match the excellence of this cabaret legend, who believe it or not has been performing for over three decades in Chicago cabaret venues.  After trying to meet this difficult challenge, Brett met with Barb Bailey who suggested bringing other Chicago legends Judy Roberts and Frank D’Rone to add a variety through their various musical styling’s of jazz and swing to this magical evening.  I must say Brett and Barb, it worked like a charm. What a night!

The evening began with Judy Roberts on piano and Greg Fishman on sax, performing “A fabulous rendition of “Lullaby of Birdland” Even though, Judy and Greg are married, they both made love to their instruments through their music. In fact, Judy mentioned a few times kissing the piano that she had never played a finer instrument. Judy wanted to take this piano home with her. However, Judy’s excellence is far more complex than having a great instrument. Judy’s love affair continued with a tribute to the late Marion McPartland, who passed away last week, with “Twilight World” Greg Fishman’s seductive sax provided a salty taste of jazz, making the song flow. Then the duo performed the most famous and requested song, Dave Brubeck’s “Take Five” where Judy not only played  her heart out she sang her heart out as well. Finally ending their set with “Puttin On The Ritz with Greg accompanying Judy with  a soulful clarinet.

The Chicago Tribune has awarded pianist/singer Judy Roberts the title “Chicago’s Favorite Jazz Woman.” Yet, she is also recognized as a worldwide jazz star thanks to the success of her international recordings and concert performances. From the Midwest to Phoenix to Singapore, Judy is best known for her fun

loving approach to an eclectic and extensive repertoire, her hard swinging piano playing, her ability to combine lush and sensitive vocals with rapid fire,scat singing, and for her unique ability to

communicate with her audience in a relaxed and intimate style. A multiple Grammy nominee, her twenty plus album/CD releases include the “The Other World,” whose hit single “Señor Blues” was number one on the jazz charts and in radio airplay; the album “Trio,” with Ray Brown and Jeff Hamilton;  and the song “Twilight World,” co-written with  late piano diva Marian McPartland .

The first act continued with Judy and Greg staying on stage to introduce Chicago music great Frank D’Rone. , D’Rone began to record in Chicago on the Mercury label after his start at Dante’s Inferno, a popular club in Chicago.  While appearing at Dante’s Inferno, D’Rone began to make many close friends among his peers in the music business. Very much the “singer’s singer”, D’Rone met one of his most enthusiastic admirers: the late Nat “King” Cole. It was Nat Cole who penned the liner notes for Frank’s first album. Another of Frank’s biggest boosters was Frank Sinatra, who requested that D’Rone be

hired in the lounge whenever “The Chairman” played the Vegas and Atlantic City venues.

Frank  D’Rone began his set with one of my favorites,the popular swing “The Song is You”.  He continued to croon with “When Joanna Loved Me”, a song made popular by his pal Tony Bennett, then to a hot jazz rendition of “Day by Day”. Frank then treated the audience to some of his talented guitar playing and riffs where he began by tuning his guitar and wetting his fingers to get a good grip on his guitar pick. He continued to play “Make Someone Happy” from his upcoming album Double Exposure. However, another great song which was performed with great feeling was “Yesterday I heard the Rain”.  Even though, I later heard that Frank D’Rone was under the weather, and wasn’t feeling 100%, Frank went on with the show with grace, style and class.

The second act of On Stage with Chicago Music Legends featured Chicago Cabaret Queen, Chanteuse, Denise Tomasello. Winner of the After Dark Award for “Outstanding Cabaret Artist” and Chicago Cabaret Professionals’ Gold Coast Award, Denise Tomasello’s prolific career is established in her hometown Chicago while spanning from coast to coast. “A showstopper,” “wildly glamorous wickedly amusing” and consummate cabaret performer” according to the Chicago Tribune. , Tomasello has headlined with such comedy legends as Don Rickles, Alan King and Jackie Mason.  Crowned “Chicago’s Cabaret Queen,” by both the Chicago Tribune, and the Chicago Sun Times, a title Denise still holds today. Tomasello’s performances have included capacity crowds at Park West, The Pump Room, Gentry, Byfield’s and Davenport’s. It was an introduction by Bill Cosby’s agent to local agents Joy Dickens and Norma Gimbel that led her to restaurant and nightclub owner Gene Sage, which would change the course of her career. Sage heard Denise sing and immediately knew she was the right fit for his namesake venue in the landmark Churchill Hotel in the Gold Coast neighborhood. This led to a successful, six year, run. Denise’s popularity during the time surged, and her name was so prestigious, that her time at Sage’s was the longest reign of a cabaret performer in a legendary room in Chicago’s history. Tomasello then held court as the longest running cabaret act at the nationally renowned Metropole Lounge in the Fairmont Hotel, performing six nights per week. Her reign at Sage’s and Metropole is compared to Bobby Short’s run at the Café Carlyle in New York City. Denise was the first Chicago performer invited to sing at New York City’s Cabaret Convention. She was a featured performer at Eighty Eight’s in Manhattan. Denise then relocated to California in 1992, and had many appearances at the Four Seasons Hotel in Beverly Hills, The Gardenia in Los Angeles and Michael Feinstein’s Cinegrill in the Hollywood Roosevelt Hotel. While L.A. had its appeal, her relationship with Chicago audiences was more like a love affair, and she soon returned home in two years to her beloved Windy City, where she currently lives with her husband Don Conover.

During Saturday’s Auditorium Chicago Legends Concert, Denise pulled out all stops by entering the stage dressed in her best couture, that exuded the sex appeal that only Denise Tomasello can do best. Denise then took control of the stage and proceeded to open her part of the show with “It’s Today” from the Broadway musical “Mame”. She then sauntered across the stage accompanied by the incomparable talents of Musical Director, Beckie Menzie and Bill Harrison, and Leo Murphy, on bass and drums to sing her signature song “I’m Still Here”. Masterfully rewritten by pianist composer, Bob Moreen. This song tells a story of Tomasello’s musical history in Chicago. Denise then did what she does best, sat on the piano to sing the riveting Jacques Brel favorite,”Carousel”, a song which audiences often request. Even though, Denise attempted to take the song out of her shows, audiences always request it and she put it back in the show to the delight of her audience.

I have often noted that performing in a cabaret show is very different from performing in a concert. There are some very basic, yet necessary requirements for cabaret.  The artist must create a story, and tell that story through the music they are singing. The story should be natural and portrayed as a natural conversation with the audience to bring the audience into the life of the story. Denise Tomasello manages to do this with every song.   In singing about her journey to California, Denise sings another parody set to the music of Barbra Striesand’s “People”, where Denise tells the story of why she kept her cool during the California earthquakes. Another one of those magical moments is where Denise sang “Yesterdays/and Yesterday When I was Young” by Charles Aznevour. This inspiring song makes the audience think of all of the things they have accomplished in life and how rapidly life goes swiftly by. Denise’s emotion during this song grips your heart. Her phrasing and emotion bring the audience into the song and hold them there to experience the same emotion. Denise then sang “How Lucky Can You Get” from the movie Funny Lady. This song was performed with drama and emotion, again telling the story about a woman who has everything but has lost love. The finale of the evening was a song written by the late Peter Allen, called “Once Before I Go” This song is moving and was sung by Denise with heartfelt emotion. As she was singing, Denise descended from the stage, and greeted and kissed many audience members, ending the evening’s love affair with a fabulous singer, that ended with a loving standing ovation.

Denise was then joined on stage with Judy Roberts, Greg Fishman, and Frank D’Rone for a final bow. The Chicago Legends concert was certainly legendary and a magical evening in a beautiful theater.  Congratulations, Producer Barb Bailey and Auditorium Executive Director, Brett Batterson for creating a magical evening of music with The Chicago Music Legends. It was an evening to remember!